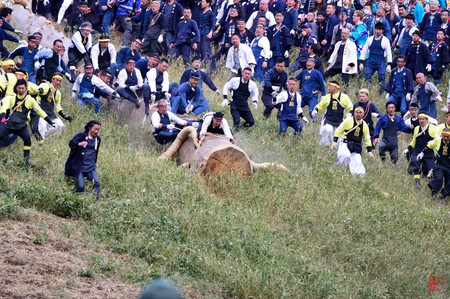 It’s an understatement to say that Japan has some pretty unique cultural quirks: whether it’s music, festivals, or television, nobody does it quite like the Japanese. This also extends to sporty activities, including competition pillow fights and virtual horse racing among others. Here’s our round-up of the most unusual.

This is a bit of a classic one. Kendama is essentially Japan’s version of the old cup and ball game. But unlike the classic version that you may have picked up from a souvenir store while on family holidays years and years ago, this game in Japan is still as popular as ever.

Originating in Japan in the 17th or early 18th century, kendama features two cups of different sized cups and stick, while the ball has a hole inside of it. This means there are three different levels of difficulty. Today in Japan it’s so popular that there’s a pretty lively kendama community and an annual international kendama tournament.

When it comes to unconventional sports, they don’t get more unconventional than botaoshi. A more brutal version of the classic schoolyard capture-the-flag-like game, botaoshi consists of two opposing teams battling it out to take control of a single rather large pole.

In English, the game’s name translates to ‘pole bring-down’. Each team consists of 150 players all coming together to create what looks like a hulking wave of crawling bodies all fighting for pole ownership. It’s combative and at times hard to watch, but definitely one of a kind.

If there was one Japanese game that could take botaoshi’s title for being the most dangerous, it would be the log riding at Nagano Prefecture’s Onbashira matsuri (Onbashira festival). Held only every six years, the highlight is when many of the area’s local men ride massive logs down the side of the mountain, transporting them to the festival’s main site. From there the second part of the log riding happens when the logs are hoisted into the year. It’s very dangerous, but impossible not to watch.

Now for something a little less death-defying. Slippery Stairs is a televised Japanese game show/sport hybrid which is as hilarious as it is infuriating to watch. Late last year it gained quite a bit of international attention online, getting shared around on Twitter and picked up by mainstream media outlets.

Basically it’s a bunch of Japanese comedians dressed in tight-fitting coloured outfits all competing to reach the top of the seriously lubricated stairs. What’s so fascinating is that though it’s potentially one of the most frustrating sports you’ve ever witnessed, it never stops being funny.

This one is a virtual sport, but probably the weirdest of the bunch. Maybe you’ve seen this one online, as it came out a few years ago and has received its fair share of internet love. At the time is was a computer-generated web browser horse race-style game that has some very unique features – these days it’s also available on DVD too. Rather than explaining what happens – which will potentially ruin what makes this virtual sport so special – it’s best to just watch this video below.

In English the name of this game consists of ‘yuki‘ (snow) and ‘kassen‘ (battle) so as you may have guessed, this is sport is essentially a massive snowball tournament. Held in February, the Showa Shinzan International Yukigassen tournament in Hokkaido is the biggest official yukigassen competition and it’s where the event originated.

The game consists of two teams comprised of seven members competing against each other. Players are eliminated when hit with snowballs and each round has 90 balls each. This is not for the faint of heart, as each snowball hurled in this game has been compressed so hard it almost feels like a rock.

More schoolyard game that actual sport, kancho is the popular Japanese childhood game that upon learning about it makes you unsure whether you want to laugh or cry.

The game consists of the attacker clasping their hands together in a gun shape then trying to jam their index fingers into the butt of the unsuspecting victim (typically a classmate or teacher) while exclaiming ‘kan-cho!’. More popular between very young kids and extremely immature adults, it’s one particular enemy sport of many teachers across the nation.

Maybe not an activity found solely in Japan, this is definitely a sport that only the Japanese have taken to such an elevated level: it’s the competitive world of pillow fighting. Known as the very formal Pillow Fight Tournament created by the All Japan Pillow Fighting Association, this tournament is like dodge ball, but instead of balls you’re using special tournament grade (yep) pillows.

The pillows used in this game were created specifically for the sport by the aforementioned Association. Consisting of two teams battling it out, how it works is if you get hit by a pillow, you’re out. Pretty straightforward, and a lot of fun.