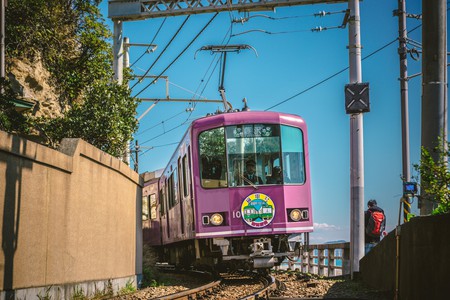 Tokyo to Osaka by bus

Known as ‘the golden route’ by locals – the typical tourist journey of Tokyo to Osaka by shinkansen is arguably the most popular route through Japan taken by foreigners. But did you know there’s more than one way to do it?

Thanks to its relatively small size, getting through Japan via bus is an easy and affordable way to get around. If you have the time and want to see something new consider scrapping the train for the road. The journey from Tokyo to Osaka by bus can be up to one third cheaper than the train ticket, although it will take four or five times longer. But if you’re after seeing something new, then the old typical trail bus is the way to go.

If you’re feeling fit and adventurous, getting around the country by bike is another option. Popular with locals but still relatively unknown among foreigners, Okinawa‘s Miyako-jima and Irabu-jima cycling route opened in 2015 and is a unique way to explore this isolated pocket of the country. As you ride along the 3,540 meter journey you can stop, hop off your bike and visit the secret local cafés and stores that call this island home.

When you set ashore on Miyako Island, try to spread your arms wide open towards the ocean. You'll be filled with an overwhelming sense of freedom and release! 📷:@marumikana #visitokinawa

Even more ambitious than the Miyako-jima trek is the Shimanami Cycling Route to Ehime, which connects Honshu, Japan’s main island, to Shikoku, one of the country’s other main islands while passing over a number of small islands along the way.

Connected by a massive 70 kilometer long bridge, this journey is now considered one of the nation’s best cycling routes and is populated by both locals and visitors all year round. There are a number of cycling stores located along the journey so if you didn’t bring the gear with you, don’t worry, you can drop off and pick up everything you need along the way.

Around the city of Yokohama by boat

Given that’s it’s a port city, it only makes sense that you explore the city of Yokohama the proper way, by boat. The most popular and scenic way is to catch the Yokohama Sea Bass. This is ‘an ocean bus’ (ferry) that treks across the city’s waterfront, from Yokohama Station to Yamashita Park. More than just a water metro, getting around by ferry lets you explore this underrated gem of a city easily and with some of the best views this side of Tokyo.

At peace. You can learn from your mistakes and become a better person. You can inspire others to become greater human beings. You can spread the love and #spreadthelandscape

From Sendai to Matsushima Bay by Ferry

Situated around 30 minutes from the center of Miyagi’s main city Sendai, Matsushima is home to a collection of stunning islands that are recognised as one of the most incredible scenic views in all of Japan. Though it’s easy to access the area from Sendai by train, a better way to get there is by ferry. There are a number of companies that offer different sightseeing routes across the waterfront, including journeys to the neighboring city of Shiogama or round trips to and from Matsushima Bay.

Enoden railway around Kamakura and Enoshima

When it comes to iconic landmarks – and there are many in Enoshima and Kamakura –, there’s nothing more iconic than Enoden train line. A local favorite that’s only now starting to gain popularity with visitors, this privately owned line connects Kamakura with Fujisawa Station in Fujisawa, while traveling along the beach town of Enoshima.

A large portion of this alternative journey is along the coastline making it a great way to soak up the area’s incredible beauty while stopping off at a bunch of prime sightseeing locations including Hase, the stop closest to Kōtoku-in, a temple with the famously huge Amida Buddha.

Located along the coast of Shikoku, this train line is one of the best, most luxurious and unique ways to see a different part of Japan. Traveling between Matsuyama and Yawatahama, the Iyonada Monogatari runs just a few times a week, allowing visitors unparalleled views of the Iyonada and the Seto Inland Sea. This train is so popular and famous in the area that locals come out just to wave to its passengers. It’s an incredible experience that will undoubtedly be the best train ride of your life.

For something a bit special here in Shikoku, you can take a luxury train called Iyonada Monogatari for a two hour trip along the island's coastline. It's also quite special for the local communities when the train comes through and the residents like to come out and wave. Lots of them even dress up in costumes or bring their pets along! #japan #travel #CHUGOKU_SHIKOKUxTOKYO