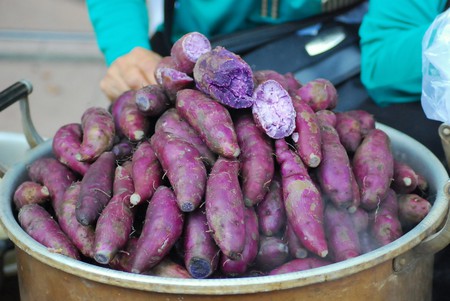 A little different from the Western variety of the sweet potato, the Japanese sweet potato known as yakiimo is a versatile vegetable worthy of its own universe. Traditionally consumed as a street food sold by hard-working vendors, the appearance of the yakiimo signifies the end of the sweltering summer heat and the sweet relief of autumn.

Being the culinary innovators that they are, the people of Japan have over the years reinvented the yakiimo again, and again. From chocolates, to sticks, to alcohol, there are so many great ways to enjoy this tasty local treat, here are some of the best picks.

Japan is so crazy about Kit Kats that there are enough different seasonal and regional flavours released here to eat a different type of Kit Kat nearly every single day for an entire year. Though in many other countries they’re relegated to the overlooked, under-appreciated snack your grandparents may have stowed away in their pantry, in Japan they’re a sign of good luck.

The similarities between the name Kit Kat and the Japanese the phrase kitto kattsu (which loosely translates to ‘you’ll win’) has meant that the chocolates have become a common good-luck gift. With 300 different flavours on offer, it only makes sense there would be a sweet potato version kicking around convenience store shelves. Actually there are two different varieties, the Okinawa and Kyushu area limited flavour one and the nationally available bake-able ones. Specialised Kit Kat editions can, however, be a little elusive so expect to do a little hunting.

The Japanese island of Okinawa is famous for its love of the sweet potato. So much so that the level of consumption of the vegetable has been linked to the long life of the island’s locals. Often bought as omiyage (souvenir gifts), Okinawa purple yam tarts are universally adored. Bright purple, a little sweet, and with an incredibly unique soft texture, these tarts are both iconic and addictive.

Shochu may be a bit more of a stretch, but it’s definitely a different (and uniquely Japanese) way to enjoy yakiimo. Sitting somewhere between wine and vodka on the alcohol content level, shochu is a distilled spirit made from grains and vegetables and, of course, in many cases sweet potato. Known as imo shochu, the sweet potato variety is a lot more flavourful than its contemporaries, making it an incredibly popular base for a number of mixed drinks, or pretty good just straight up.

Sake it to me baby! Sweet potato Shochu. #sweetpotatoshochu #sakeittome

Arguably there’s no country that does pre-packaged ice cream better than Japan. Italy has gelato and Turkey has those tricky vendors, but here in Japan the world of convenience store ice cream is essentially infinite. There are actually two main ways to enjoy sweet potato ice cream here in Japan, and both are undeniably delicious.

Firstly there’s the Häagen-Dazs classic tub-style purple treat that upon its release last year became one of the company’s most popular flavours. But if you want to try something very unique, you’ve got to check out the super realistic yaki-imo ice cream. Featuring a sweet potato ice cream filling covered with a sweet potato-flavoured wafer-style outside shell shaped to look just like – yep, you guessed it – a sweet potato, it’s an ingenious confectionary creation.

In 2014, McDonalds raised eyebrows when they released their very Instagram-friendly pastel pink shake. Westerners would be excused for assuming that this shake was some super sweet, bizarre grape monstrosity, but in reality it’s one of the most adventurous and arguably tastiest shakes they’ve ever released. They’ve also released a soft serve version, too; however, that’s in Hong Kong. Given that Japan’s menus are often dictated by season, this was a limited autumn release, and it did only run from September until October back in 2014. Though it was fleeting, who knows, if there’s enough demand it may make a resurgence – we saw something similar happen early this year with the chain’s cult favourite Szechuan Sauce.

The team at Glico, one of the biggest snack companies in Japan, have come up with a simply genius new way to enjoy the sweet potato: Karusatsuma Murasaki Imo Sweet Potato Sticks. Light and crispy, these hollow sticks actually taste exactly like sweet potato, making them the perfect treat if you can’t decide between wanting something savoury or wanting something sweet. Though they may not be as ubiquitous as say their popular snack cousin Pocky, you can still find them across the country and online.

Purple chocolate-covered cookies shaped like bamboo, Takenoko No Sato Cookies don’t really make sense, but they’re so good that nobody cares. From the world of Meiji, the creators of the popular Kinoko No Yama aka the Meiji Mushroom, these little cookies are as addictive as they are cute. Like many interesting snacks in Japan, their release can be a little more dependent on season, but if you’re in a convenience store, they’re definitely worth searching out. If you’re not in Japan, they are available online, too!

Like the McShake, this one is a bit of a fleeting seasonal treat, but really its limited release just makes it all the more special if you can get your hands on it. The killer combination of chocolate, mochi (chewy rice cake) and sweet potato is what you’ll get with this, the Mochi Chocolate Satsumaimo. Out in the autumn months (September, October and November), these dense little delicacies can’t be bypassed.