7 of the Safest Places to Eat Blowfish in Japan 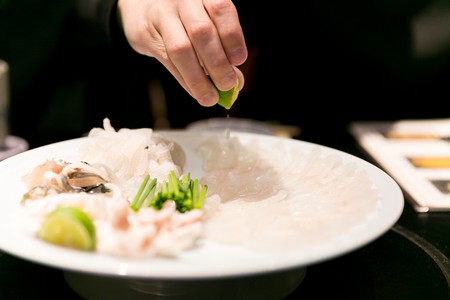 Fugu, or Japanese blowfish, has gained quite the lethal reputation around the world thanks to its quick and deadly neurotoxin, tetrodotoxin. This hasn’t stopped people from seeking the delicacy out, however, and fugu has historically commanded high prices as chefs were traditionally required to undergo extensive training to learn how to safely handle and remove the blowfish’s poisonous organs without contaminating the rest of its flesh. Fugu is becoming a much safer option these days, however, with nontoxic farm-raised varieties and the rise of special facilities that clean and process the fish and distribute it to restaurants risk-free. If you’re tempted to try this daring delicacy, here are seven blowfish restaurants across Japan where you can be assured of a safe meal.

Shimonoseki is considered the “Blowfish Capital of Japan,” and there’s no better place to try it than Fuku Ryori Shinoda. The term fuku, meaning “blow,” was the original word for blowfish, and it still goes by that name in some places in Japan such as Yamaguchi prefecture. Here the name has a double-meaning, as fuku is also the word for “luck.”

Takoyasu, which opened in 1929, is considered the best place to enjoy blowfish in Osaka. The two-star Michelin restaurant specializes in all kinds of fugu preparations, including tessa (fugu sashimi), tecchiri (fugu hot pot), and even karaage (deep-fried fugu).

The iconic paper lantern of a giant blowfish has enticed customers into fugu restaurant Zuboraya for decades. Although the restaurant lacks any Michelin stars, it is one of the most famous blowfish specialty restaurants in Osaka. Zuboraya is known for using the entire blowfish to make different dishes, down to the bones and fins.

Fukushin, which opened 1947 in Kyoto, specializes in high-quality, natural fugu prepared by highly trained chefs. Although many prefectures have softened their regulations on blowfish preparation, you can be sure that the expert chefs at Fukushin can identify various fugu species by sight, know which organs are toxic, and safely remove the dangerous parts for a safe and worry-free blowfish meal.

Established in 1905, this three-star Michelin restaurant in the upscale residential neighborhood of Nishiazabu offers a memorable blowfish dining experience in an elegant and traditional Japanese setting. Enjoy their fugusashi made with paper-thin slices of blowfish, which are wrapped around a bite of leek and dipped into a citrus-y vinegar soy sauce.

Sawaichi, located in Tokyo’s urban nightlife district of Roppongi, is a hit among Japanese celebrities. The restaurant boasts the finest ingredients cooked with precision and care, and you can be sure to receive five-star service if you come here.