7 Flower Festivals That Are Worth Travelling to Japan For 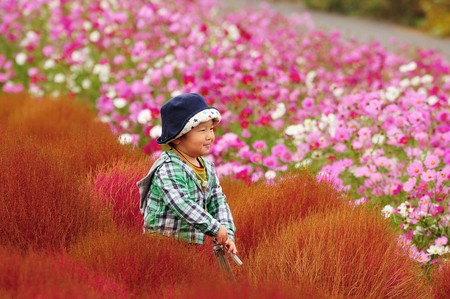 Even those with a passing interest in Japan are familiar with hanami (aka Cherry Blossom season) – a very special and fleeting moment during spring when the country is covered in soft pastel pink. However, not so many people know that there are equally stunning, more location specific flower festivals throughout the year. Here’s our guide to just a few of them.

Located in the stunning surroundings of Showa Kinen Park lives the Cosmos Flower Festival, a stunning autumn sight. Beginning during middle of October, running right up until around mid-November, the festival is a visual onslaught of vibrant color that takes over the park’s hilly grasslands. Beyond the stunning flowers, the massive park is home to a forest of trees, a varsity of blooming flowers, biking trails, bird sanctuaries, fountains and even a dragonfly marsh. As well as the flowers themselves, the celebratory festivities that surround the festival draw guests from across the world.

This uniquely Japanese celebration runs during the country’s peak cherry blossom months of April and May. During this time the country is drenched in the soft pinks of the iconic sakura. Though there are a vast number of stunning locations to witness the blooming of sakura, the Tokyo Fuji Shibazakura Festival is definitely worth considering a visit. Running from mid-April through to late-May, its location is what makes it so special. As around 800,000 shibazakura trees blossom are watched over by the towering presence of Mt Fuji creating nothing short of an awe-inspiring spectacle.

Hokkaido is famous for many things; dairy, incredible snow, and great sweets but did you know it’s unofficially the sunflower capital of Japan? With the appearance of summer comes the glowing sunflowers that stand tall in the fields of Hokuryu. Running from mid-July to mid-August, the small Hokuryu city festival welcomes around 1.5 million sunflowers. The most ideal time to visit is August when the city’s hills are adorned with the striking gold flowers.

The iconic Red Spider Lily goes by a number of very unique names depending on what corner of the world you’re from, however, it’s most ominous name is ‘the death flower’. Named so because of its tendance to sprout in cemeteries throughout Japan and China, the lily is also a catalyst for a much less eerie celebration in Kinchakuda park, in Hidaka, Saitama, not too far from Tokyo. During the peak lily times of mid-late September carpets of striking red adorn the Kinchakuda fields in Hidetaka making it a real sight to behold. Though the flower is native to China, it has taken on a significant role in Japanese society, becoming a symbol of heaven.

There are a number of iconic wisteria flower viewing spots in Japan, however, if you have to select just one it’s worth considering a visit to the Wisteria Festival at Kawachi Fuji Garden. Located in Kitakyushu city, in Fukuoka Prefecture, the best time to visit the garden is late-April to mid-May when the flowers are in full bloom. The branches of these stunning trees sag under the weight of a broad palette of colours, including pale red, white, dark purple, violet, blue, and pink. The garden is privately owned, so to visit you must purchase a ticket in advance during the peak season in order to enter the garden.

Kawachi Fuji Gardens in Kitakyushu, Japan is where you will find the pastel-colored fairy tale Wisteria Tunnel. The gardens are home to about 150 Wisteria flowering plants spanning 20 different species and colors, including white, blue, purple, violet-blue and pink. #kawachifujigarden #wisteriatunnel #exotictravelclub

Besides its glorious sunflowers, Hokkaido is also home to some of the most stunning lavender fields in all of Japan, and potentially the world! Located at Farm Tomita, in the humble Nakafurano area, the Farm Tomita Lavender Festival is one summer event you can’t miss if you’re in the area. Ideally, the best time to visit is in July. If you’re feeling adventurous you can use the farm as a starting-off point for further flower hunting in the area, as the nearby Furano Valley and Tokachi Mountain are home to fields of stunning lavender. If you’re after something a little more out there, consider exploring Irodori fields which feature a rainbow coloured flower field.

Park
Facebook
Email
Twitter
Pinterest
Copy link
Share
Map View
If you want to enjoy the beauty of Japan’s flower festivals but also don’t want to run the risk of missing the sometimes-temperamental seasonal blooming period, it’s best to make Hitachi Seaside Park an itinerary must. With flowers blooming throughout the year there’s always something to see here. Located in Ibaraki Prefecture, April and May see the park smattered with more than 4.5 million blue nemophila that complement the glowing blue spring skyline, while the autumn season known as ‘koyo’ during October sees the parks grounds transform from a rich green to fiery gold and orange.
Open In Google Maps
Mawatari Hitachinaka, Ibaraki, 312-0012, Japan
+81292659001
Visit Website
Give us feedback
Give us feedback