6 Temples and Shrines To Visit in Tokyo

People come from around the world each year to visit Tokyo’s shrines and temples | © Claudine Klodien / Alamy Stock Photo
The shrines and temples of Tokyo attract thousands of visitors each year. While many have been rebuilt since their founding due to fire, earthquakes or war, they still retain their splendour. Here are six of the best.

Buddhist Temple
Zōjō-ji opened in the late 14th century | © coward_lion / Alamy Stock Photo
San’en-zan Zōjō-ji is an important temple to Jōdo Buddhists. During the Tokugawa Shogunate, it was the burial site of six former shoguns, and today you can find those graves in the Taitoku-in Mausoleum or the cemetery out back, with two designated as Important Cultural Properties of Japan. Parents also come here to choose a statue in the garden to decorate in order to say goodbye and ease their child’s transition to the afterlife. While businesses and surrounding enterprises have reclaimed much of the temple’s original property, it still retains much of its former glory and is worth a visit when in Tokyo. 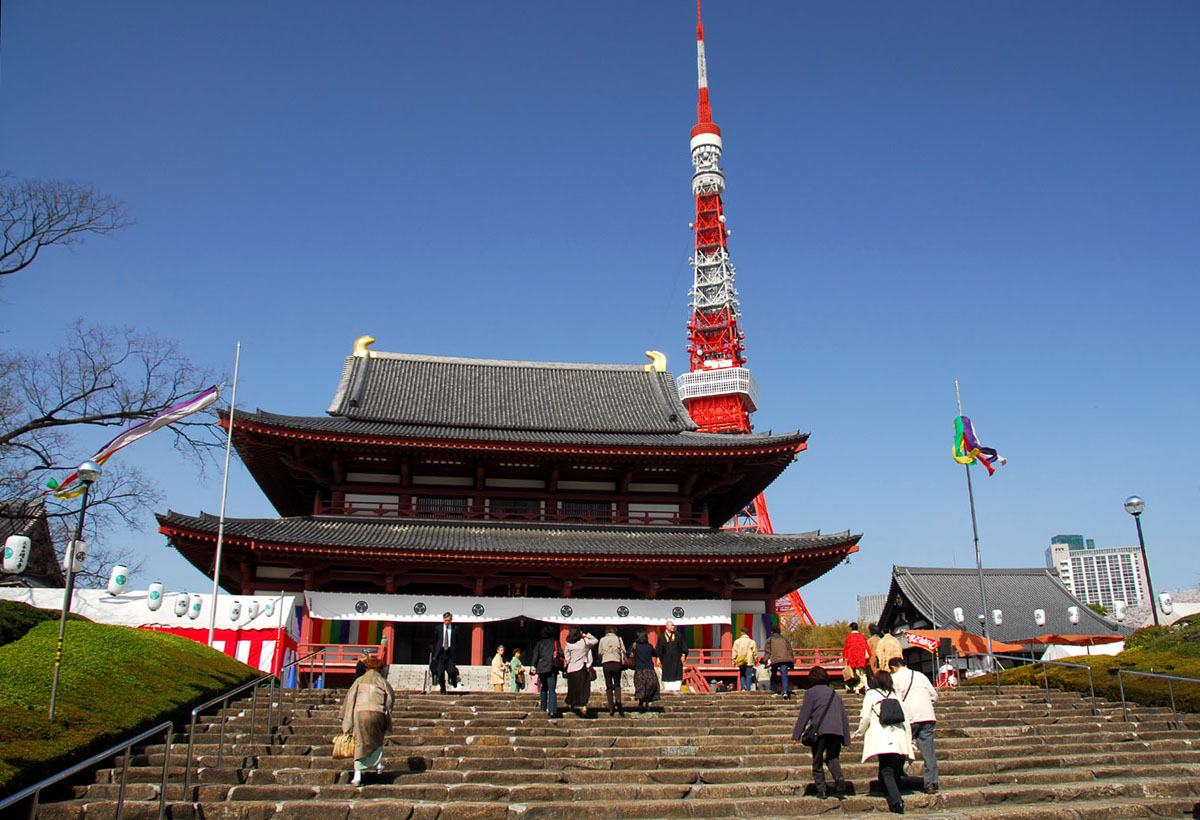 The iconic red Kanda Shrine, also known as Kanda Myojin, has played an important role in Tokyo Shinto worship since the Edo Period. The shrine is situated in downtown Chiyoda-ku, and the kami (spirits) enshrined here include two of the Seven Gods of Fortune, making this an ideal place to pray for wealth and success in business. Interestingly, due to its proximity to Akihabara, Kanda Shrine has also become popular with the tech crowd, who purchase charms to ward off damages to their electronics.

Buddhist Temple
People from around the world visit Sensō-ji | © Judy Bellah / Alamy Stock Photo
Book Now
Located in the historic Asakusa neighbourhood, directly beside the famous Asakusa Shrine, Sensō-ji is the oldest and most visited temple in the city with visitors coming from both Japan and abroad. The path to the temple is lined with stalls, small shops and vendors selling traditional wares and snacks and is an area popular among tourists looking to dress up in kimono. The grounds of the Buddhist temple are also home to Chingo-dō, the Tanuki Temple. Tanukis are Japanese raccoon dogs thought to bring good luck and protect homes and businesses from fire and theft. You can access the Tanuki Temple via a separate entrance on Dembō-in-dōri.
More Info
Open In Google Maps
1 3, 2-chōme, Asakusa Taito City, Tokyo, 111-0032, Japan
+81338420181
Visit website

Shrine
Nogi Shrine opened in 1923 and is dedicated to General Nogi Maresuke and his wife Shizuko | © Elizabeth Cole / Alamy Stock Photo
In 1912, General Nogi Maresuke and his wife Shizuko committed ritual suicide in this spot after learning about the death of Emperor Meiji. The two are now enshrined here, and the general is worshipped for his honour and nobility. Having been designed in the 20th century and rebuilt after World War II, Nogi Shrine reminds us that not all shrines and not all kami must be centuries old in order to be worthy of worship.
More Info
Open In Google Maps
27 11, 8-chōme, Akasaka Minato City, Tokyo, 107-0052, Japan
+81334783001
Visit website

The Imperial Shrine of Yasukuni honours the souls of those who lost their lives in war while fighting for Japan. Unfortunately, the shrine-war memorial has become a source of controversy, especially among neighbouring Asian countries, since many of those enshrined and honoured here are listed as Class-A war criminals. For instance, Justin Bieber was forced to apologise to Chinese fans after posting a picture of himself visiting the controversial memorial. Despite this, Yasukuni Shrine plays host to multiple religious and festival occasions throughout the year, including an annual spring festival and Mitama Festival, where visitors come to pray to their lost relatives and friends.

Nestled among the lush greenery and landscaped water features of Inokashira Park lies the Benzaiten Shrine, a small red Shinto shrine devoted to the goddess of the same name who is the deity of everything that flows, including knowledge, water and music. Benzaiten, adapted from the Hindu goddess known as Saraswati, is recognised in both the Buddhist and Shinto faiths. The Inokashira also plays host to the famous Ghibli Museum that showcases Japanese animation.