Japanese Shrine Festivals Not To Miss This Fall 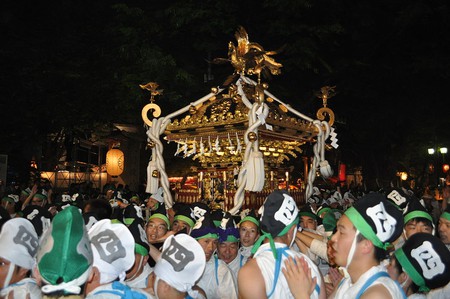 Fall flavors, colorful leaves and mild weather make fall an ideal time for these annual festivities. Shrine festivals in Japan are a time-honored tradition and must-see experience for any visitor to Japan. Check out some of Japan’s top festivals for the fall season.

The big draw for the Hikawa Shrine Festival is the dash (large, mobile shrines on platforms) that get pushed and pulled along up the hills and down the dips of Akasaka District’s narrow lanes. The dashi are traditional parade floats and they add a unique twist to this otherwise ordinary shrine festival. These platforms are rotated each day of the festival, so if you were to come back each day, you would always see different dashi. Besides the dashi and mikoshi (portable shrines carried by bearers) being paraded around by costumed volunteers, there will of course be music and eating and a festive mood, and souvenirs to buy as well. It’s definitely worth putting on your fall to-do list. 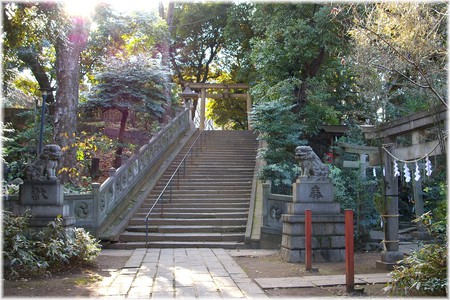 The Hikawa Jinja in Akasaka | © Betacommandbot/WikiCommons

Nezu-jinja (shrine) is renown for its Azalea Festival in Spring. Its Autumn counterpart is equally entertaining and is the shrine’s second major annual event. It is also one of Tokyo‘s longest-running festivals, having been around since the Edo Period. During this festival, expect the usual music and festive atmosphere along with traditional snacks and vendors. And of course the procession of the mikoshi (small portable shrines) to round out the festivities, which will begin around 1 P.M. 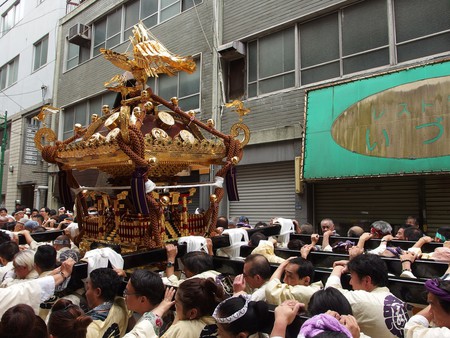 A typical mikoshi procession, this one at Hanazono | © Guilhem Vellut/Flickr

Also known as the Okunitama Shrine Chestnut Festival, this Autumn festival is a celebration of this year’s chestnut harvest. Chestnuts are known as marron in Japanese and they are a traditional flavor in fall. Like the Nezu Shrine Autumn Festival, the Okunitama Shrine Chestnut Festival began in the Edo Period. Centuries ago, the annual autumn kagura dances, which are dances performed for the entertainment of the gods, happened to coincide with the chestnut harvest. Over time, the two came to be celebrated together as one big seasonal, Japanese event. Enjoy games, music, mikoshi processions and seasonal chestnuts as well as chestnut-flavoured snacks. The Chestnut Festival is also known for the hundreds of paper lanterns lighting the area around the shrine. It usually runs from 9 A.M. to 9 P.M. on each day of the festival but of course if you want to enjoy the romantic lighting of the paper lanterns and atmospheric kagura dance music, it’s best to go a bit later.

The Oeshiki Festival is a Buddhist Festival which commemorates the anniversary of Nichiren’s death. Nichiren was a Buddhist priest who lived nearly one thousand years ago and is known for his strong devotion to the Lotus Sutra. While the Oeshiki Festival is celebrated all around Japan, the one at Ikegami Honmoji is particularly prestigious since Nichiren died at this very temple. A standout feature is the mando rite, or the procession of 10,000 lights, in which thousands of volunteers carry decorative lanterns from the station to the temple. 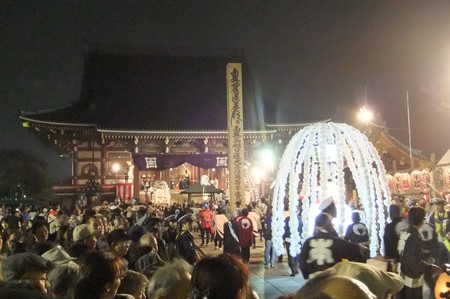 This festival is known in Japanese as the Nada no Kenka Matsuri. Although similar ‘fighting festivals’ are held throughout Japan, this one in Himeji City has become particularly famous. It takes its name from the fact that the participants carrying the mikoshi bash into each other at random, creating a spectacle that simulates a fight. Participants must hoist their mikoshi on top of another in order to ‘win’. 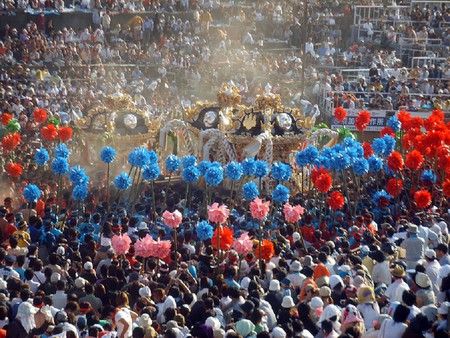