3 Michelin-Starred Restaurants In Japan That You Have To Try 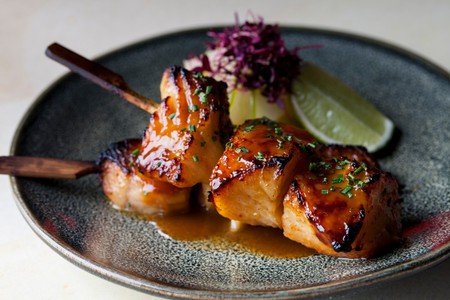 There is no higher honor for a restaurant than to receive a Michelin star. If you are a foodie looking for your next travel destination, we suggest paying a visit to Japan, the country with the most Michelin-starred restaurants in the world. Due to a culture that emphasizes quality, simplicity, and precision, it’s no wonder that the cuisine would follow suit. Here are the 3 Michelin starred restaurants you have to try.

Restaurant, Japanese, Sushi, $$$
Facebook
Email
Twitter
Pinterest
Copy link
Share
Sukiyabashi Jiro is headed by chef Jiro Ono. You may have seen this legendary restaurant in the famous documentary called Jiro Dreams of Sushi. Naturally, perusing the many great cultural and culinary wonders of Japan requires at least one sushi-oriented excursion. Sukiyabashi Jiro offers you the best of the best, as each piece of sushi is handmade by the 89-year-old Jiro himself. This is also a place to get a crash course on the art of appreciating and consuming sushi, including how to properly hold the sushi and add sauce to it. The interior is quite simple and small, which only adds to the authenticity of this unforgettable dining experience.

When most us think of the chefs at Michelin star restaurants, it is natural to assume that these men and women achieved such acclaim following a lifelong ambition to do so. In this way, Hajime has an interesting story. Although he is the head chef and founder, Hajime Yoneda’s first love was mathematics and engineering. After earning a degree in this field, he worked in electronic design for a few years before breaking from this path to study French and Japanese culinary arts. Today, it is clear that his technical background heavily influences the dishes served at Hajime. Most of his creations have their foundations in French cuisine guided by Japanese pragmatism.

Located in the hip Kagurazaka neighborhood in Tokyo, Kohaku has received its third Michelin star. The head chef is Koji Koizumi, and he offers a dining experience that features many of the elements of Japanese culinary and ceremonial precision that the culture is celebrated for. From traditional Japanese dishes tinged with simple tweaks in spices to the carefully thought-out table settings, Kohaku is a dining experience to savor. Most of the menu focuses on kaiseki meals, which are elevated, multi-course dinners that are traditional in this area of the city. You can enjoy a meal here for a relatively reasonable price.