18 Spots That Encapsulate the Diverse Cultures of Japan 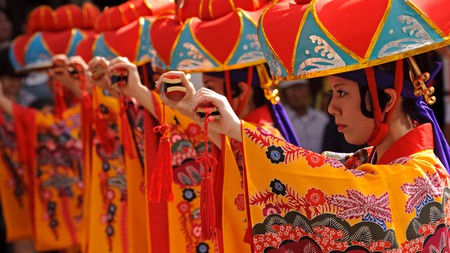 We don’t usually think of airports as cultural attractions, but CULTURE GATE to JAPAN is turning eight transport hubs into just that. The project displays innovative artworks inspired by indigenous and regional cultural resources, so you start your trip with a glimpse of the diversity of modern Japanese culture. Most visitors pass through Tokyo, where the works on display examine the interplay between Japan’s past and future. But here, we’ll explore four regional airports, and look at where else you can explore each area’s local crafts and history.

Naha Airport, in the far south of Japan, is the gateway to the subtropical islands of Okinawa. This archipelago, an independent state, called the Ryukyu Kingdom, for centuries, has always had a distinct artistic tradition. The region has a fascinating cultural heritage, fusing and distilling cultural elements from Japan, Korea, China and Southeast Asia over hundreds of years to create its own distinct culture. Local crafts here are bright, intricate and lively, and the Culture Gate pieces in Naha Airport focus on the theme of MEMORY. 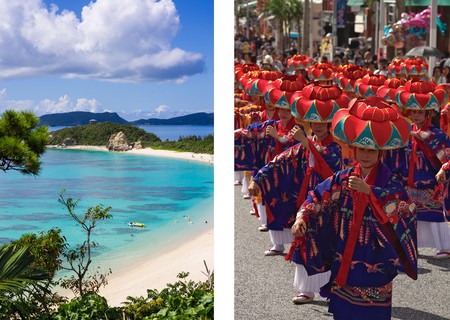 Okinawan artist Satoru Higa has created a 3D digital model of Shurijo Castle. This grand complex of buildings in Naha, Okinawa’s capital, was the palace of the Ryukyu Kingdom until 1879. Its ornate seiden (main hall), gleaming with red lacquer and decorated with fearsome dragons, serves as a symbol of Okinawa. 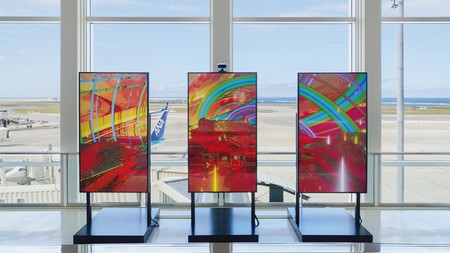 Having already been destroyed in 1945 and rebuilt in the 1990s, much of Shurijo Castle was lost again in a fire in 2019. While it’s being reconstructed visitors can see other examples of Okinawa’s Unesco-registered gusuku (stone-walled fortresses), including atmospheric ruins in Urasoe, north of Naha. Nearby is the royal mausoleum of Urasoe yodore, carved into the base of cliffs and entombing several Ryukyuan rulers. 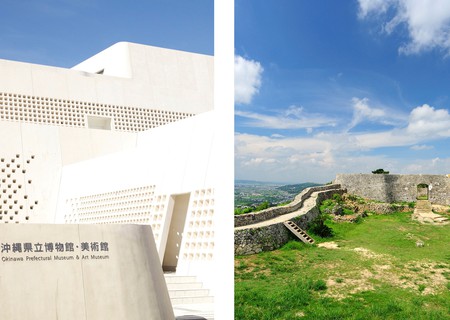 The design of the Okinawa Prefectural Museum and Art Museum in Naha (left) was informed by the gusuku architecture of fortresses such as Nakagusuku Castle (right) | Left: © OCVB | Right: © yannick luthy / Alamy Stock Photo

The Okinawa Prefectural Museum and Art Museum in Naha also calls to mind gusuku architecture, with its sloping walls built in creamy local limestone. Animator and illustrator nuQ has created a mural drawing on the museum’s vast artistic and historical collections.

In her pop-art style, nuQ brings together elements of Okinawa’s history and its modern incarnation as a beach resort. This creative mixing, typical of Okinawan culture, is called chanpuru – a word you’ll usually come across on menus, as the name of a local stir-fried dish. 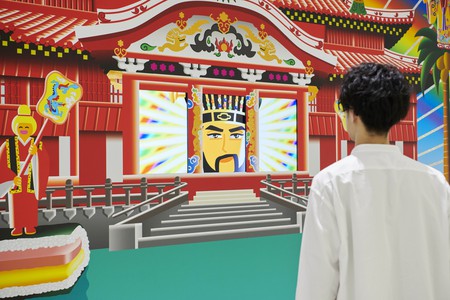 The artworks in Fukuoka Airport explore the theme of PATTERN. Fukuoka is a modern, multicultural city, where Kyushu’s diverse regional foods and crafts mix with international influences, and the two artists Mirai Mizue and Macoto Murayama reflect this in their works. 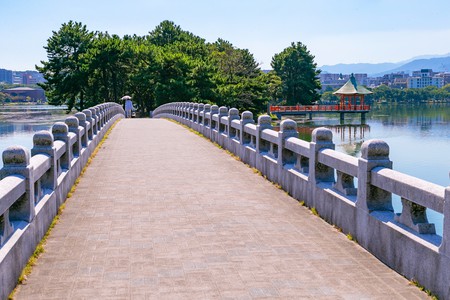 The artworks in Fukuoka Airport explore the theme of Pattern, and how it is reflected in this modern, multicultural city | | Courtesy of Fukuoka Prefecture Tourist Association 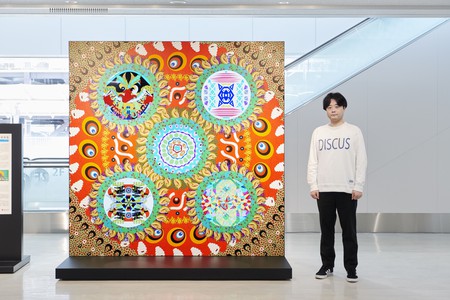 Artist Mirai Mizue with his artwork inspired by the patterns of Kyushu regional crafts, on display at Fukuoka Airport | | Courtesy of Culture Gate to Japan

Colourful Baramon kites, depicting warriors and demons, are traditionally made in the Gotō Islands, off the coast of Nagasaki. Aside from its slow pace of life, beautiful beaches and crafts, this archipelago is known for its Unesco-listed hidden Christian sites, established in this remote region when Christianity was outlawed in Japan. 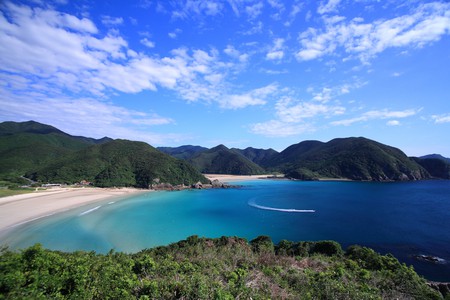 The Goto Islands, off the coast of Nagasaki, are where colourful baramon kites, depicting warriors and demons, are traditionally made | © Nagasaki Prefecture Convention and Tourism Association

Vibrant Satsuma-kiriko cut glass is made in Kyushu’s southern Kagoshima Prefecture. There are several workshops where visitors can see the delicate glassware being made. You should also make time to enjoy volcanic Kagoshima’s many relaxing onsen (hot spring baths). 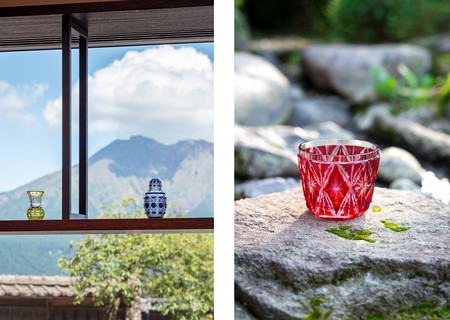 In central Kyushu’s Kumamoto Prefecture, Yamaga City is known for its intricate lanterns, made from washi (Japanese paper) and glue – nothing else. In mid-August, at the Yamaga Toro festival, 1,000 kimono-clad women perform a traditional dance while wearing the lanterns as ornate headdresses, lighting up the summer’s evening. 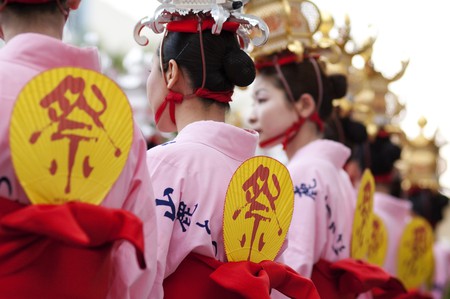 The final craft Mirai Mizue references is Hakata-ori, a patterned woven fabric from his hometown of Fukuoka. It’s one of many things in the city with a Chinese influence – like the local cuisine, which features pork-heavy Hakata ramen and crispy, bite-sized gyoza. 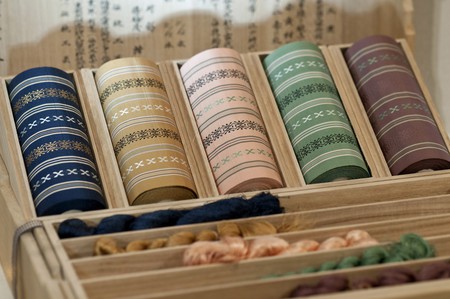 The decorative ceramics that Macoto Murayama focuses on have been made in Arita, Saga Prefecture, since the 17th century. Early May is the perfect time to source your own Arita-ware pieces, when the town holds a huge ceramics fair. 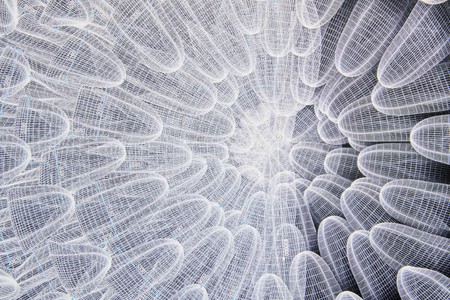 Chrysanthemum, the kaleidoscopic installation by Macoto Murayama, draws its influence from the decorative ceramics that have been made in Arita, Saga Prefecture, since the 17th century | | Courtesy of Culture Gate to Japan

Japan’s northern island, Hokkaidō, is home to the Ainu people. To reflect the Ainu culture’s oral tradition, and with the key word INVISIBLE, the creative company Naked Inc has set up a multimedia installation in New Chitose Airport focusing on sound.

The Ainu people are still very present in modern Hokkaido, and in April 2019 were officially recognised by Japan as an indigenous group. Throughout the island, there are several places where visitors can learn more about their history, culture and traditions. 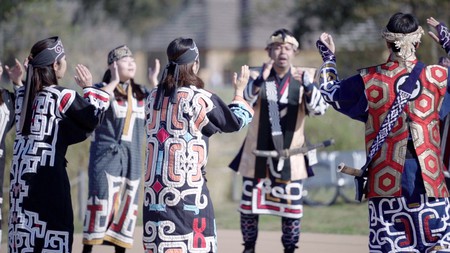 An Ainu dance performance at Upopoy, National Ainu Museum and Park in Hokkaido | | Courtesy of Culture Gate to Japan

The newest addition is the Upopoy National Ainu Museum and Park, opened in Shiraoi in 2020 on the shores of Poroto Lake, in Southern Hokkaidō. It is made up of sleek modern buildings with exhibits on historical and contemporary Ainu life, plus an open-air museum of traditional houses. 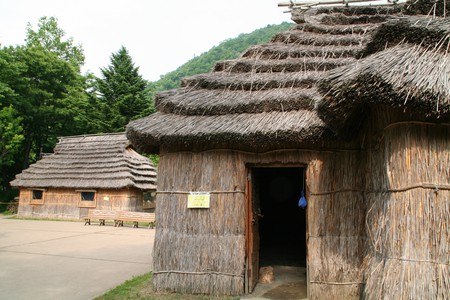 Nibutani Ainu Culture Museum, east of Shiraoi, has a particularly strong selection of Ainu crafts. Like Upopoy, it also holds traditional music and dance performances, and offers hands on experiences like embroidery and wood carving.

Even if you only have time to visit Hakodate or Sapporo, you can still get a glimpse of Ainu culture. The southern port city has the Hakodate City Museum of Northern Peoples, which displays some of the oldest examples of Ainu clothing and crafts. Just outside the prefectural capital, Sapporo, the Ainu Culture Promotion Centre (Sapporo Pirka Kotan) comprises an open-air museum and a modern facility with displays, activities and performances. 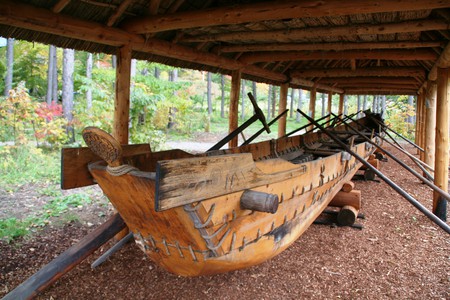 The Ainu Culture Promotion Centre, just outside Sapporo, offers an excellent glimpse of Ainu culture and some of the oldest examples of Ainu clothing and crafts | | Courtesy of Sapporo Tourism Association

At Chubu Centrair International Airport, in central Japan, two artists have explored the region’s links to samurai and ninja through the theme of MOTION. While samurai were Japan’s powerful warrior elite, ninja were mercenaries hired to do covert work, rumoured to have powers such as invisibility and shapeshifting. 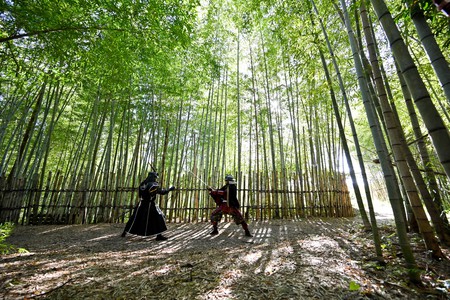 Yusuke Shigeta’s video installation tells the story of the Battle of Sekigahara, in which more than 150,000 warriors battled for several hours. There are several preserved sites on the battlefield in Gifu Prefecture, plus the Sekigahara Battlefield Memorial Museum, opened in 2020. 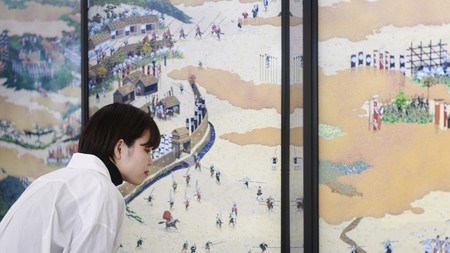 Yusuke Shigeta’s piece, telling the story of the Battle of Sekigahara, is on display at Chubu Centrair International Airport | | Courtesy of Culture Gate to Japan

The Tokugawa Art Museum in Nagoya provides more context for this pivotal battle of 1600, and the 250-year Tokugawa Period that followed it. In that more peaceful era, samurai developed arts including the tea ceremony and calligraphy. While the capital of the country was Edo – today we know it as Tokyo – this region, as the birthplace of Shōgun Tokugawa Ieyasu, remained culturally important.

In their multimedia work A Box of Signs, the creative group EUPHRATES have captured the mysterious, concealed nature of the ninja. The two main training schools in this region laid the foundations for the ninja archetype we know today, and traces of their lives still exist. 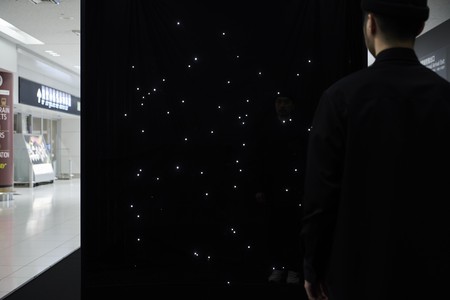 A Box of Signs, by EUPHRATES, captures the mysterious nature of the ninja | | Courtesy of Culture Gate to Japan

Iga City, in Mie Prefecture, is home to the Ninja Museum of Igaryu and Iga Ueno Castle. The museum has exhibits on ninja training techniques, holds demonstrations of their arts and allows you to explore a ninja house – complete with trapdoors, hidden rooms and escape routes. The imposing castle has more displays, and hosts a ninja festival in April and May. 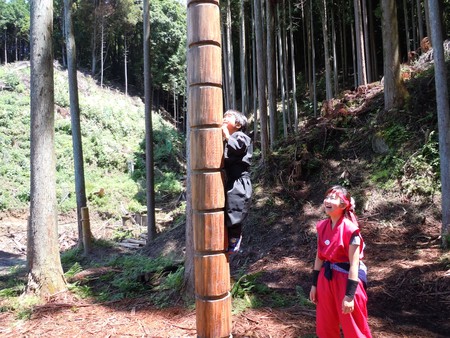 Nearby Koka City, in Shiga Prefecture, was the base of the second ninja school. Visitors can explore the Koka Ninja Village, an open-air museum great for families, and Koka Ninja House, perhaps the most authentic and insightful example of this kind of building you can find today. 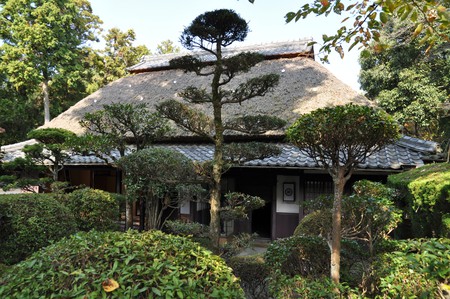 Ninja House and Museum, in Iga Ueno, is perhaps the most authentic modern example of this kind of building | © Mie Prefecture Tourism Federation

Visit the official website to see more of the artworks and to take a deeper dive into the destinations and Japanese traditions that inspired them.