Street food culture is less prevalent in Japan compared to other Asian countries like Thailand or Taiwan. While regular night markets are relatively uncommon, Japanese food vendors take to the streets in packs during the hundreds of festivals which take place across the country each year, with some vendors moving from city to city every night. Here are the best dishes to look out for.

Takoyaki literally translates to ‘octopus fried,’ an appropriate name for this popular dish consisting of fried balls of batter filled with octopus, green onions, ginger, and tempura pieces. The crispy takoyaki balls are usually topped with more green onions, along with fish shavings, mayonnaise, and a special takoyaki sauce, similar to Worcester sauce. Although the octopus makes the dish sound bizarre, it is actually surprisingly mild and pleasantly gooey. Takoyaki vendors are particularly prevalent on the streets of Osaka, where the dish originated, but can be found in pretty much any Japanese city.

Kare pan is a type of okazu pan, a term used to describe breads filled with different kinds of savory ingredients. Made of slightly sweet dough that has been breaded and deep fried, a kare pan has rich Japanese curry at its center. Japanese curry is quite different than other Asian curries, with a dark color and a comparatively mild flavor. With its wonderfully crispy outside and soft interior, a kare pan makes for an unusual but tasty Japanese snack. 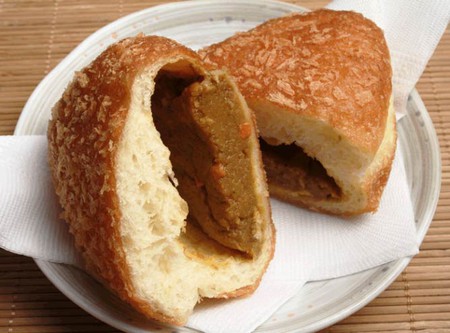 Although crêpes certainly didn’t originate in Japan, they’re a hugely popular street food, usually served wrapped into a cone so they’re easy to eat on the go. Japanese crêpes often contain fresh ingredients like sweet fruits or savory eggs, and they’re typically a little crisper than the French equivalent. Many are filled with distinctly Japanese ingredients, such as azuki beans and whipped cream, or chicken with teriyaki sauce. Marion Crêpes on Takeshita-dori in Harajuku is one of the most well-known places in Tokyo to try one. 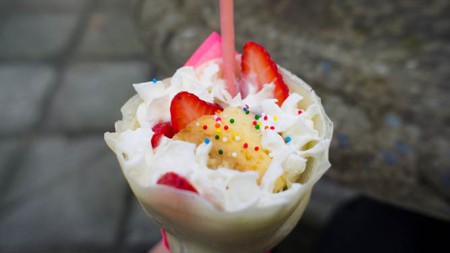 Gyoza originated in China, where they’re known as jiaozi, but they’re also very popular in Japan. These deep-fried dumplings are typically filled with a mixture of ground pork, green onion, nira chives, cabbage, garlic ginger, soy sauce and sesame oil. The dumplings are usually served in groups of six and eaten alongside a special dipping sauce made from soy sauce and vinegar. You’ll find them served in izakaya and ramen shops, but they also make frequent appearances at festivals and street markets.

Similar to crêpes, korokke is a Japanese spin on a classic French dish. Consisting of mashed potatoes or cream sauce surrounded by a breaded and deep-fried patty, korokke are inspired by French croquettes. Casual and satisfyingly greasy, korokke can come with a variety of other fillings, with certain areas of the country specializing in regional variations. When sold by street vendors a korokke is served wrapped in paper, making it easy to hold and eat. 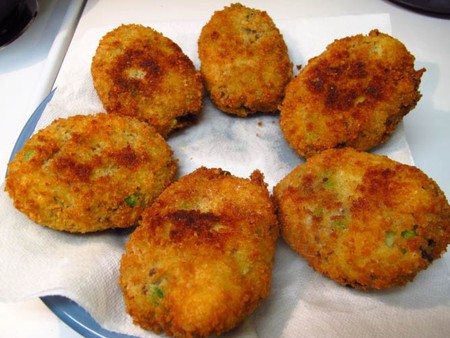 Korokke | © I Believe I Can Fry/Flickr

Much to the surprise of most foreign visitors, corn (tomorokoshi in Japanese) often shows up on pizzas, breads, and pastas in Japan. When in season, cobs on a stick can often be seen being grilled up by street vendors at festivals. The corn is boiled and then grilled with miso to give it a pleasant smoky char. The grilled cob is buttered and finally seasoned with soya sauce. Yaki Tomorokoshi is typically associated with Hokkaido, the prefecture where most of the Japan’s corn is grown, but you’ll see it served all over the country. 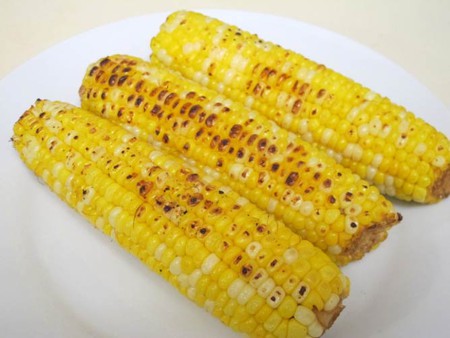 Shioyaki is an extremely simple yet surprisingly flavorful snack, consisting of baked fish served on a stick. Mackerel (saba) is a common catch off the coast of Japan and therefore it is often used to create this dish. The fish is seasoned only with salt to enhance the flavor of its flaky meat. While saba shioyaki can often be found being grilled up at festival street stalls, a similar dish called tai no shioyaki (salt-grilled sea bream) is actually part of traditional New Year feasts.

Dango are round dumplings formed from glutinous rice flour and water, boiled until they are firm. Three or four dango are typically served on a skewer and seasoned with a variety of sweet or savory sauces, or flavored pastes. Mitarashi dango is one of the most prevalent versions of the dish, with the rice dumplings grilled and covered in a soy-based sauce. You’ll often see vendors grilling up these tasty snacks outside Shinto shrines.

Japanese sweet potatoes typically have a somewhat sweeter taste than the Western version. They’re most often seen served on the streets in autumn and winter, and can be prepared a variety of different ways. Daigaku imo (university potato) consists of deep-fried sweet potatoes piece topped with sweet syrup and toasted sesame seeds. Other vendors roast the whole potato over hot stones, or cut it into thick chips which are then covered with salt and sugar. 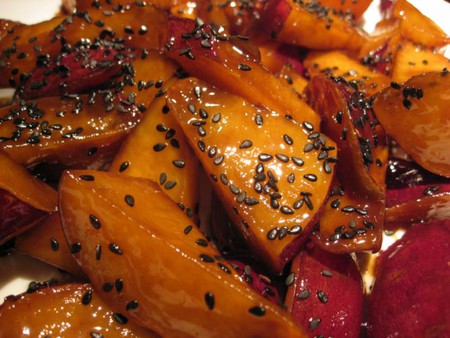 Okonomiyaki is sometimes nicknamed a ‘Japanese pancake’ because, like a pancake, it is prepared on a griddle. The savory dish consists of flour, eggs, cabbage, as well as a variety of possible veggies and meats. Okonomiyaki is most often prepared ‘Kansai Style,’ with the ingredients mixed together and then poured on the grill. The dish can also be cooked ‘Hiroshima Style’ in which the batter and other ingredients are cooked separately, and then served on top of yakisoba noodles. In both styles, the finished dish is usually topped with dried seaweed, pickled red ginger, mayonnaise, and savory okonomiyaki sauce.

Yakitori describes small pieces of chicken, served skewered and grilled on a bamboo stick. While chicken thighs and wings are often used, the skewers can also be made with the chicken liver, skin, small intestine, or cartilage. The meat is typically seasoned with salt or a savory sauce. Some skewers incorporate other ingredients besides chicken, such as tsukune which consists of balls made with minced chicken, egg, vegetables and spices; or negima in which the chicken pieces alternate with pieces of leek. 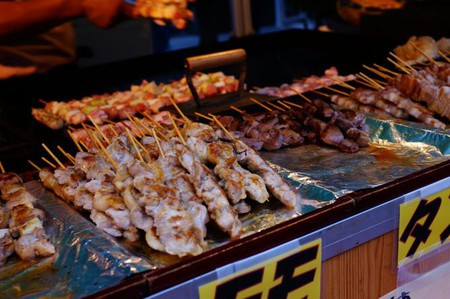 Despite their fish-shape, taiyaki are sweet pancake-like treats filled with red bean paste. With a delicately crispy exterior, the taiyaki’s soft interior can also be filled with custard, chocolate, or Nutella. You might also see savory versions of the snack, filled with sweet potatoes, cheese, sausages or vegetables. Taiyaki batter consists of flour, baking soda, salt and sugar, which is cooked in detailed fish-shaped molds to give the finished taiyaki its distinct appearance.

Senbei are rice crackers which come in hundreds of different flavors, shapes and sizes. Although you’ll see plenty of packaged senbei sold in stores, the crackers are best bought on the street, where they’re cooked over a charcoal grill. In Tokyo, senbei are quite dense and crunchy as a result of the type of rice used; while in Kyoto, senbei are made from mochigome rice which makes them lighter in texture. Most senbei are savory, seasoned with soy sauce or salt, but sweet varieties can also be found. 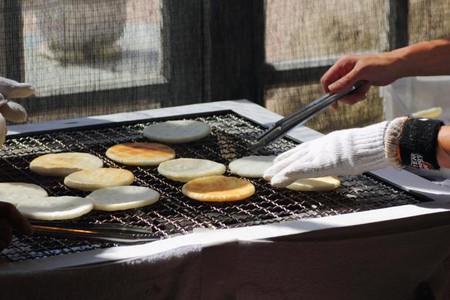 Yakisoba is made with ramen-like noodles, which are stir-fried with small pieces of pork and various veggies like cabbage, carrots, and onions. Based on Chinese chow mein, this comfort-food dish is seasoned with a special sauce which gives the noodles their distinct tangy and spicy flavor. Perfect as a light meal or snack, the noodles are typically topped with seaweed flakes, fish flakes, and red pickled ginger. You’ll also sometimes see the noodles served hot-dog-style in a bun, topped with mayonnaise and pickled ginger.