12 of the Best Japanese Horror Films of All Time 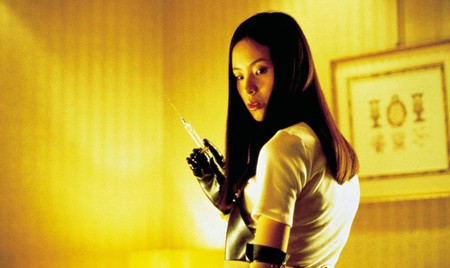 Now that the witching season is nearly upon us, it’s as good a time as any to revisit some of the best scary movies that Japan has to offer. J-Horror has been immensely popular in the West since the late 90s, when a number of titles achieved breakout status and became hits outside their native country, but Japan has far more to offer the discerning viewer. Read on, if you dare.

The country’s horror film tradition goes back a lot longer than some might realise, as proved by this historical tale set in feudal Japan. A pair of women (the word Onibaba means ‘Devil Woman’) kill samurai and plunder their corpses, and you won’t be terribly surprised to discover that things don’t exactly work out. The film’s stark black-and-white photography is the ideal fit for an eerie tale complete with demonic masks, sudden shocks and a constant sense of dread.

It seems strange to think now that once upon a time, creepy twitching beings with long black hair weren’t an established trope of horror cinema. While the Ring franchise has been rinsed by sequels, remakes and tacky crossovers, the original is still unmatched in its sheer, inescapable creepyness. And “that” scene, nearly 20 years later, is a wide-eyed nightmare brought horribly to life.

The legenadary Takashi Miike has given so much over the years to cinema of every genre that singling out a single work verges on the impossible. In terms of his horror fare, Audition makes the cut as the true horror of the story, in which a grieving widower unknowingly courts a psychopath, lies in its depiction of loneliness. To be alone is to suffer, this film tell us, not just physically but also emotionally. And by the film’s stomach-churning climax, there’s plenty of suffering to be had.

More of an extreme action thriller than a horror movie per se, but Battle Royale remains one of the finest and most important Japanese movies ever made. High school students are forced to slaughter one another at the behest of a fascist government (a state of affairs which seems even more depressingly plausible in the present day) until only one is left standing. Director Kinji Fukusaku delivers a high-octane gut-punch of a movie, much imitated but never bettered. It will still be essential viewing 100 years from now.

Industrialised fetish body-horror may not necessarily be a genre that the world was on the lookout for in the late 80s, but that didn’t stop writer-director Shinya Tsukamoto’s unforgettable debut from becoming an instant cult classic on release. Best described as David Cronenberg on bad drugs (but in the best way), this is a film unlike anything you’ve ever seen, with eye-poppingly horrendous scenes that will have audience members wincing for days afterwards.

If you thought that horror anthology films like XX and The ABCs Of Death were relatively new inventions, think again. Kwaidan is the grandaddy of them all, a collection of short features based on the ghost stories of Greek writer Lafcadio Hearn. Exquisitely filmed and symphonic in its execution (it received an Academy Award nomination for Best Foreign Language film), it’s one of the most beautiful experiences that Japanese cinema has to offer.

Exte may not be high art but makes this list solely for its lunatic premise – a film all about killer hair extensions. Played entirely straight, it’s the sort of movie that only the Japanese could get away with thanks to their ongoing cultural obsession with long black hair. Chiaki Yuriyama (you may remember her from such films as Kill Bill: Volume 1 and Battle Royale) heads up a pulpy, gruesome tale which is perfect viewing for Halloween night. Quite literally hair-raising.

An accurate title for a film if ever there was one, Grotesque is 100% unrepentant gore-sploitation from schlock auteur Koji Shirashi. The plot is virtually non-existent; a sadistic maniac abducts and tortures an innocent young couple. That’s it. It’s hard to recommend a film like Grotesque as its artistic merits are few and far between and its depiction of torture is forensic in its detail. If, however, Japanese horror is your thing but you’re bored of scary women with long black hair or schoolgirls in peril, then this is the last game in town. Approach with extreme caution, and keep a very strong drink on hand at all times.

Acting very nicely as a palette cleanser to the likes of Grotesque is the pure blast of escapist adrenaline that is Versus. Like John Woo getting pissed with Sam Raimi and making a movie before they have time to sober up, the fun machine is turned all way up to 11 as yakuza battle the undead in a forest. Very healthy quantities of samurai swords, big guns and martial arts are wielded by cool-looking people dressed entirely in black. The film may be low on budget but it doesn’t get in the way of an enormously thrilling ride.

Splice the DNA of Robocop, Kill Bill and Yoshiaki Kawajiri’s Wicked City together and you end up with Tokyo Gore Police, an unhinged cartoon of a film that bridges the gap between the ridiculous and the sublime. A vengeful policewoman, played by Audition‘s antagonist Eihi Shiina, is tasked with battling an army of cyborg creatures with horrific mutations. Blood erupts in geysers and the cast of mutated freaks get ever-more inventive as the film hurtles merrily along. The best sort of bonkers that money can buy.

Another classic from yesteryear based on a Japanese folk tale, this time telling a Shakespearean tragedy in which a man betrays his wife in the name of power, with disastrous consequences. The use of scares is light but deliberate in a powerful moral parable which has an ethereal atmosphere all the way through.

One of the more recent scary movies from Asia to make a splash overseas, Snow Woman is a haunting, melancholy affair from acclaimed filmmaker Kiki Sugino. The film, once again based on the popular Japanese folk tale, revolves around a doomed love story and a mysterious woman in white. Alluring, poetic and spectral, with a chilling central performance from Sugino (who also co-wrote and directed), it’s reassuring proof that Japan can still make horror that aspires to be great art.