11 Reasons Why You Should Visit Japan's Forgotten North 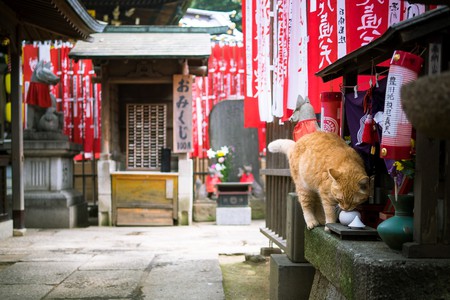 As well as being home to vibrant cities and historic destinations, Japan also boasts many a hidden gem. Fox villages, cat islands, incredible autumn leaves and snow monsters are just some of the quirky experiences that exist here, and guess what? They can all be found in the country’s more northern pockets.

Rich with unique history, the city of Haokdate in Hokkaido prefecture is a stunning place to visit. Home to some of the best seafood in the country, it’s also home to Fort Goryokaku, a massive, star-shaped, Western style fortified town, which was built during the end of the Edo Period. In 1910 the fort was transformed into a public park and filled with cherry blossoms. Today the combination of its unorthodox shape and beautiful blossoms make it one of the most scenic pockets of Japan.

Enjoying the view from Goryokaku Tower overlooking the star shaped citadel. In winter it lights up and is absolutely breathtaking, new Hakodate Travel Guide post on the blog now!

Miyagi – the home of the fox village

Situated near the mountainous area of Shiroishi, Miyagi is a particularly unique spot that’s home to the Zao fox village. Populated by over 100 animals and six different types of foxes alone, it’s arguably the cutest village you’ll ever visit. The furry residents of the fox village are incredibly friendly and used to humans, and have no qualms in letting you pet their fiery red fur. What’s even more special is that in spring, the village hosts a ‘hug a baby fox’ opportunity – a world exclusive experience.

The Tohoku area boasts some of the most stunning nature and koyo (autumn foliage) in all of Japan, and there’s no better place to see it than in Kakunodate. Here you can witness the mountains transform from lush greens to fiery red, orange and gold during late October and mid-November. Akita prefecture in Tohoku is also home to some incredible samurai villages that are worth exploring while you’re in town too. Second only to the pastel pinks of cherry blossom season, koyo in Japan is a simply magical natural phenomenon.

Home to some of the best snowfields in the world, the small town of Zao Onsen is one hidden gem worth uncovering during your Japan visit. In winter the mountain ranges of this hot spring town are dusted with powdery white snow that’s truly a sight to behold. It’s also one of the few places in Japan where juhyo (ice trees) aka ‘snow monsters’ exist. Thanks to the heavy snowfall and freezing winds, the trees in Zao take on curious shapes that actually look like snow monsters towering over the mountain.

Shimokita Peninsula – the most northern tip of Honshu

The axe-shaped peninsula jutting out the side of Honshu (the main island of Japan) is called the Shimokita Peninsula, and it’s like nowhere else in the world. With rugged shorelines and a sulfur-rich landscape, its main attraction is Osorezan, aka ‘Fear Mountain’, which has been likened to Buddhist hell. As you’d expect, the weather can be hellish, and the area is often closed in winter – however when the weather is more hospitable, it’s worth visiting just to say you’ve been to ‘Buddhist hell’.

With five entrances, eight bridges, and standing three towers high, Hirosaki Castle is the ultimate when it comes to Japanese castles. Perfect for history and architecture buffs and fascinating for those with even a vague passing interest in Japanese history, a day spent here is one you’ll remember for the rest of your life. Though the building itself is remarkable, what’s even more amazing are the area’s natural surroundings. In springtime the castle is carpeted with pale pink cherry blossoms, while in winter white peaks of snow pile up on and around the structure, giving the castle an air of mysticism unlike anywhere else.

For one week every February, Sapporo is overtaken by the city’s world famous snow festival, creating a white winter wonderland. Originally started in 1950, when a few high school students built some snow statues in Odori Park, the tradition has now become a world class event that attracts two million visitors from all over Japan and the rest of the world every year. Here you can witness meticulously crafted sculptures that tower up to 25 meters (82 feet) wide and 15 meters (49 feet) high all lit up daily until 10pm. To celebrate the event the city also hosts a number of other side-events including concerts and fireworks shows.

(📸 @abijavellana) February is the coolest month in Hokkaido, yet millions of people here step out of their homes and hotels to brave the cold temperatures outside with one destination in mind–the Sapporo Snow Festival, a winter dreamland made from crystal-like ice and white snow. Held in early February, the festival is one of Japan's largest winter events, attracting visitors from all over Japan and around the world. About two million people come to Sapporo to see the numerous snow and ice sculptures lining the grounds of Odori Park, Community Dome Tsudome, and Susukino Street. Blogpost: http://www.ourawesomeplanet.com/awesome/2017/02/sapporo-snow-festival.html #sapporo #sapporosnowandsmile #sapporosnowfestival #hokkaido

If you’ve spent any time in Japan you’ll know people here take their food pretty seriously. So when they say that Hokkaido has the best dairy in Japan, you’d better believe it’s potentially some of the best in the world. The area produces 60% of the nation’s dairy and they even try to fit dairy into products that may usually not even use it. For example, many ramen shops often serve the iconic dish with a slice of butter on top. If you like your milk, chocolate and cheese, chances are you’re going to love Hokkaido.

Aomori – best apples in the world

Aomori is to apples what Hokkaido is to dairy. The producers of over 50% of the apple market of Japan, the name Aomori apples is synonymous with luxury and quality. Home to the most beautiful apple orchids, Aomori offers visitors the chance to experience the age-old local tradition of apple farming and culture, including apple harvesting, apple pie eating, apple cidre (cider) drinking and apple candies. You can also try an ‘apple bath’, an experience unique to the area which is said to have a number of health benefits, including improving blood circulation and increasing your natural beauty.

Known as Japan’s horse breeding district, Iwate prefecture is home to one very special festival, the Chagu Chagu Umakko Horse Festival. Started around 200 years ago as a celebration of the horses that had toiled so hard in the rice planting season, this event happens each year in June. Some 100 stunning horses decked out in brightly colored harnesses, decorative costumes and jangling bells, make their eye-catching way along the 15 km (9.3 miles) from Takizawa City to Morioka City, making this event truly a sight to behold.

An island occupied by cute kitties – is there really much else that needs to be said? Tashiro island – aka ‘Tashirojima’ in Japanese – is a humble, rural island located off the coast of central Ishinomaki City in Miyagi prefecture (the same prefecture that’s home to Zao fox village). The hundred of felines occupying the city are cared for and worshipped by the island’s human residents. Originally they were brought to the island to battle the area’s silkworm problem, but over time the kitty population has boomed, meaning that the furry residents outnumber humans almost four to one.