11 Magical Forests Across The World You Have To Explore

Among the Big Ones | © John Fowler
Walking through a spectacular forest is an ethereal experience. Not only are you surrounded by nature’s raw beauty, but the fresh air is extremely beneficial. The ancient Chinese tradition of forest bathing has several neuro-psychological benefits, including boosting the immune system, reducing stress levels and blood pressure, and improving concentration. Not to mention, you’ll be inspired by the incredible landscapes. Here are the world’s top 11 magical forests that you have to explore.
Sagano Bamboo forest, Arashiyama, Kyoto © Casey Yee, Flickr

Forest
In Arashiyama, to the west of Kyoto, an area famed for its striking cherry blossoms, is the equally mesmerizing Sagano Bamboo Forest. A symbol of prosperity and purity in Japan, bamboo is a significant part of the country’s culture, and Sagano remains one of Japan’s top tourist destinations. Admire its orderly and stunning beauty, while walking through the paths that cut through the sky-skimming bamboo. Relax your mind in the inspiring light, which turns a different shade of green depending on the time of day. You can also take bikes along this route.
Looks like it's closed Hours or services may be impacted due to Covid-19
More Info
Open In Google Maps

Situated nearby and named after the town of Halle in Belgium, Hallerbos forest is known for its magical carpet of bluebells that bloom every spring, attracting visitors worldwide. Also known as ‘The Blue Forest,’ Hallerbos is the most extensive forest area between the regions of Zenne and Zoniën. Normally blooming around mid-April, Hallerbos is a public forest with three marked hiking trails. This magical forest is well-maintained throughout the year, and is home to various educational events, making it perfect for family visits. 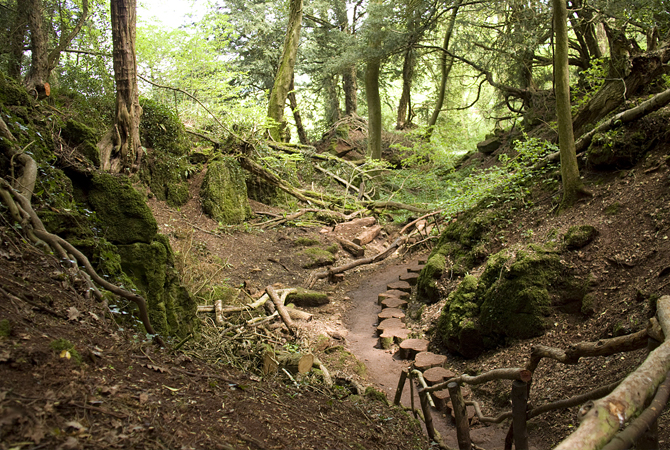 Nestled inside the Forest of Dean, Puzzlewood‘s mysterious moss-shrouded trees and wiggly paths have captivated visitors for decades. Over a mile of stone and log pathways were laid here in the early 19th century, offering a series of charming walks. Perhaps unsurprisingly given its mystical look, Puzzlewood is thought to be the source of inspiration for fantasy writers: J.R.R. Tolkien’s Middle-earth in The Lord of the Rings; as well as J.K. Rowling’s Forbidden Forest in the Harry Potter series. 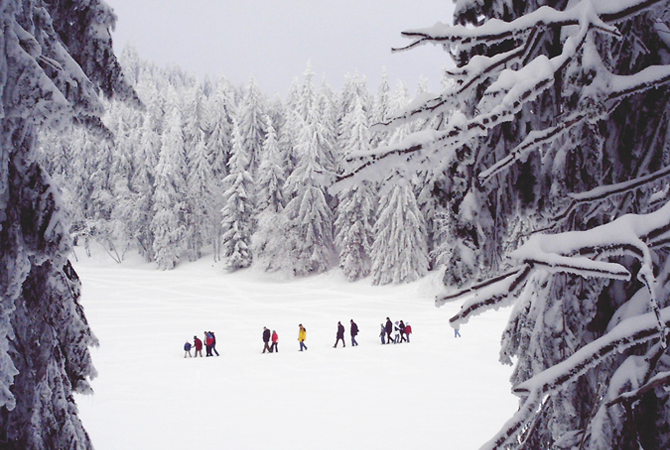 A tribe on a frozen lake | © Francois Schnell/Flickr

Natural Feature, Forest
Autumn in the Black Forest | © Manuela Seiler / Alamy Stock Photo
Located in Baden-Württemberg in southwest Germany, The Black Forest is the heart of the region’s beauty, with its dense evergreen forests and picturesque surrounding villages. Spanning 6,009 square kilometers, you can explore the forest on foot, bike or ski. The region is home to impressive outdoor activities such as swimming and sailing at Lake Titisee, or traversing Feldberg Mountain on your skis. The forest’s magical landscape has been the setting to some of the Brothers Grimm’s fairy tales.
More Info
Open In Google Maps
Baden-Württemberg, Germany

Opened in September 25, 1890, Sequoia National Park is a sprawling site of 1,635.19 square kilometers, and is home to world famous sequoia trees. Mostly contained in the Sierra Nevada region of California, the sequoia trees are an immense species, measuring an average height of 50–85 meters in height and six to eight meters in width. The forest is also home to General Sherman, one of the largest trees on Earth, with a trail surrounding the site. Make an adventure out of your stay by staying in a mountain lodge or lamp-lit camping park, and enjoy the best of America‘s outdoor activities including hiking, camping, and fishing. Surrounded by mountains, waist-deep rivers and the forest’s winding pathways, there’s plenty of reasons why you’ll fall in love with Sequoia Park’s natural beauty. 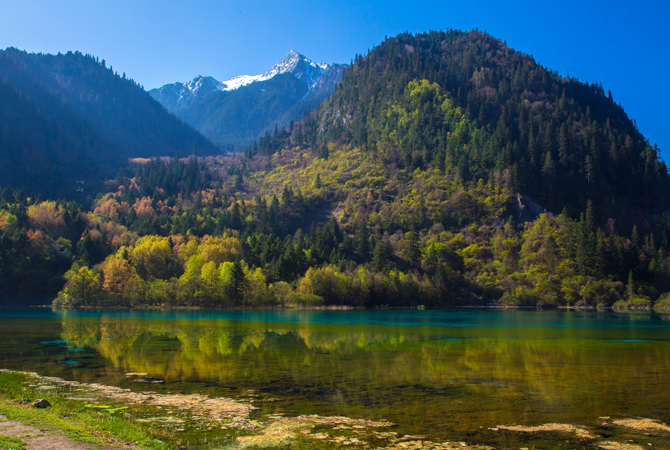 With its snow capped peaks, translucent lakes and multi-colored foliage, Jiuzhaigou Valley nature reserve and national park is picture perfect. Located in the north of Sichuan province in China, this UNESCO World Heritage Site is home to nine Tibetan villages, over 300 species of wildlife, and incredible landscapes, including vast lakes, waterfalls and mountains. One of the park’s highlights is Five Flower Lake, where you can see the criss-crossed trunks of fallen trees through the neon blue water.

Redwood, home to Earth’s tallest trees, is a multi-faceted space of prairies, oak woodlands, riverways, as well as diverse wildlife and cultural traditions. This magical forest is ideal for simply walking amongst the trees, and being inspired by the light that falls through the awesome and dwarfing canopy. 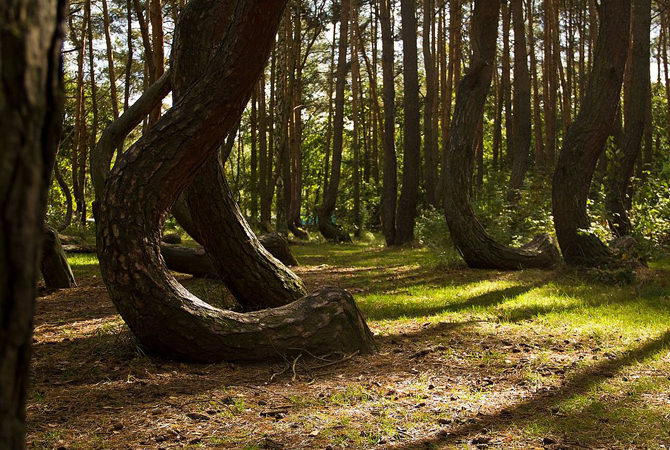 Known as Krzywy Las in Polish, the Crooked Forest is a grove of hook-shaped pine trees found outside of Nowe Czarnowo in north-western Poland. This whimsical collection of around 400 trees was planted in the 1930s, and remains a much-visited attraction today. The trees, which are all north-facing with a 90-degree bend at the base, are thought to have been fashioned by mechanical tools, but the true origins of their odd position remain unclear. Embrace the mystery with a walk through one of the world’s more bizarre forests. 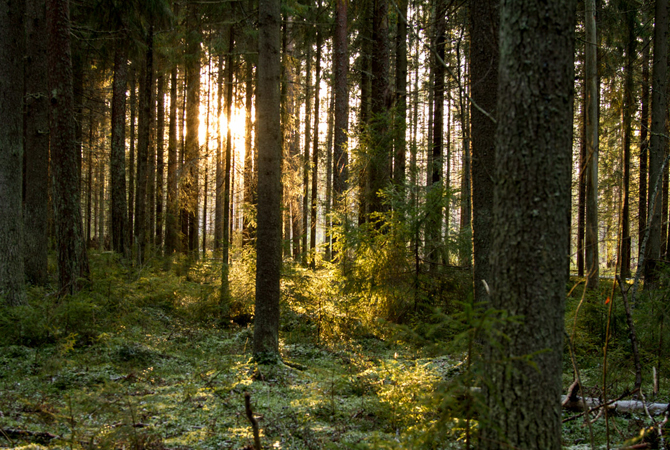 Pori National Urban Park is a man-made park which is incorporated into the city of Pori in Finland. The park is split into three areas: the islets, the town, and the forest. Walking through this green corridor, following the Kokemaenjoki River, it’s easy to forget you’re actually in the middle of a city. The urban park has helped unite the natural and urban landscapes, as well as preserving the series of heritage of buildings which follow the riverbank. 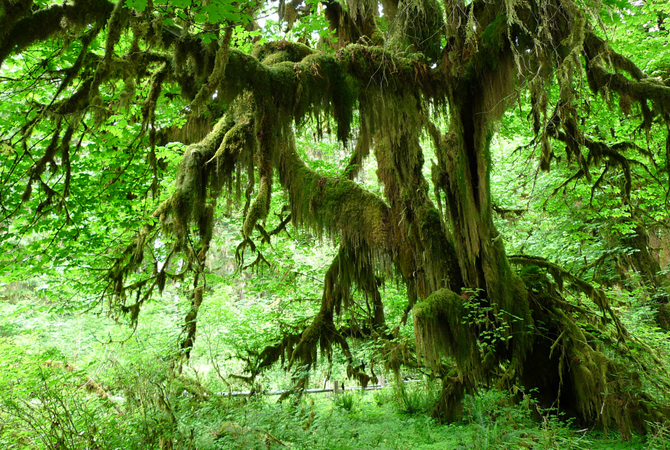 Park
© Bill Gozansky / Alamy Stock Photo
Olympic National Park is the place to completely disconnect. Marvel at the region’s glacier-capped peaks, plunging valleys, hot springs and Pacific coastline. You’ll be spoilt for choice as the area hosts several varieties of forests, numerous waterfalls and natural lakes. The Quinault Rainforest, one of the three temperate rainforests found in the Western hemisphere, is one of the park’s most serene spots. Nature fans will be delighted at the species of trees found here, from Hemlock, Douglas Fir and Western Red Cedar trees, to the world’s largest Sitka Spruce tree. The park offers a range of tours to experience the forest in all its glory.
More Info
Open In Google Maps
3002 Mt Angeles Rd, Port Angeles, Washington, 98362, USA
+13605653130
Visit website

A mere 20 minutes from Quebec City, Canada, Jacques-Cartier National Park is ideal for outdoor enthusiasts. This boreal forest is magnificent all year round: from an exceptional range of snow sport activities in winter, to kayaking and hiking against spring’s stunning backdrop. The park also protects the area’s incredible wildlife, including: moose, caribou, white-tailed deer, gray wolves, red foxes, the Canada lynx, as well as the black bear.