11 Japanese Drinking Games to Try at Your Peril 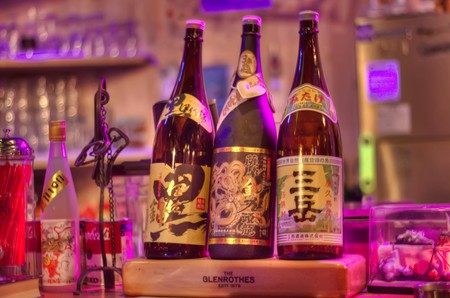 Sake, whisky, shochu, and beer it’s no question that drinking in Japan is a nationally loved pastime. Did you know that the country is actually home to some of the most innovative, fun, and ridiculous drinking games in the world? Next time you’re at a house party, throw out the playing cards, skip the beer pong and try one of these.

An excuse to eat lots of Pocky and drink, this game is essentially a win-win (until the next morning of course). For those uninitiated, Pocky is the famous, now internationally loved, Japanese biscuit stick snack. Covered in various types of chocolate, they’re as fun to eat as they are delicious.

How this game works is two people take each end of the stick and munch, getting closer to their opponent with each bite, the first person who chickens out before meeting lips or who drops the pocky first is the loser and has to finish their drink.

Once the ‘pin, pon, pan’ has been said, the person who said ‘pan’ must immediately point to a random member of the group who starts the cycle again. If you’re caught unaware and lose the cycle, you lose and must drink.

A little easier to figure out, ‘jyan, ken, pon’ is Japanese for ‘rock, paper, scissors’. It’s just like the Western version, except instead of saying ‘rock-paper-scissors’ you say ‘jyan-ken-pon’. Most people know the rules to Rock-Paper-Scissors, so, if you lose, you drink. But be wary, Japanese people take Jyan-Ken-Pon very seriously.

The rules for this game are similar to Jyan Ken Pon, but the setup is a little different. This game was traditionally played by maiko (like geishas) with their clients. How it works is two players each take a side that’s separated by a sliding door (traditionally a rice paper door). Once they’ve assumed positions, the players sing the “Tora Tora Tora” song then pose in one of three characters: a Samurai (Watonai) with a spear, an old woman with a cane or a tiger. The old woman wins over the Samurai, the Samurai wins over the tiger and the tiger over the old woman, so the loser of the duel has to drink.

This game is like that weird magic trick everyone remembers but doesn’t quite understand the purpose of. You know, the one where the trickster hides a ball under one of three cups and switches them around quickly then gets someone to select which cup the ball is under.

The game, Kiku No Hana, which means ‘chrysanthemum flower‘, is essentially the same but with sake cups. Originally the game required a chrysanthemum flower to be placed under one of the cups, but these days anything will do, like a coin. The cups are mixed around and each person takes a turn to pick up a cup, the person with the object under the cup must drink the amount of cups that have been turned up. It’s like the Russian Roulette of drinking.

This game is all about embarrassing yourself, so it’s not good for those who are faint of heart or can’t make fun of themselves. In Japanese, ‘Osama’ actually means ‘King’, so one person is designated the ‘Osama’, and it’s their duty to come up with hilarious dares for the others to perform.

How it works is you collect a chopstick for each player, write ‘Osama’ on one and number the rest for one to however many chopsticks there are. Once collected each person takes a chopstick (the numbers are concealed), just like drawing straws. Players keep their numbers hidden and the Osama selects a number and a dare allocated to that number, for example ‘number three and number six must do the tango’ or ‘number one must drink’; the players with those numbers have to get up and do as the king commands. After the command is fulfilled, the chopsticks get collected and redistributed, and the game goes on, as do the dares.

This is a Tokyo-specific one, but a great way to test your knowledge of the Tokyo train system. The Yamanote line is the major train line that runs though the city circle.

Sitting in a circle, like the train line, everyone claps in rhythm, and each player has to name a station in line on the beat. If you repeat a station, hesitate or cannot think of a station to name, you lose and you drink.

Almost a little similar to Jyan Ken Pon in set-up, this game requires two opponents to face each other, each with three chopsticks at their disposal. Players hide anywhere between one and three of the chopsticks in their fists and, on the count of three, each player guesses the amount their opponent has in their hand. If you get it wrong, you drink.

One rather rowdy game is Takenoko Takenoko Nyoki Ki. In Japanese ‘takenoko’ means bamboo, and ‘nyoki’ is the sound bamboo shoots make when they sprout; ‘ki’ means tree. This game is best played with a group of bigger than five.

How it works is each person has to say a number in ascending order between one and one less than the amount of people in the group followed by ‘nyoki’, for example if there are eight people in the group you start with ‘ichi nyoki’ (one nyoki) and go up to ‘nana nyoki’ (seven nyoki). You can jump in with the next number anytime, but if you say the same number at the same time as someone else you’re both eliminated and have to drink. If you don’t manage to say a number at all you’re out too.

A game that needs a little more preparation, ‘bekuhai’ are actually special drinking cups from Kochi Prefecture that cannot be put down until they’re been drained of all their booze. Shaped to look like famous Japanese icons like tengu, hyottoko, and okame these uneven bottomed cups typically hold around three to four shots of sake.

J is such a regular, the staff are showing us all the props. Like this set of #Bekuhai #Sake drinking cups and a die for drinking games. #cool

OK, so this is by no means a traditional Japanese drinking game but it’s fun and hilarious nonetheless. Japan World Cup is a legendary internet game series that has seen three releases over the years, the latest being in 2011. A bizarre horse race type of simulation, this game no longer lives online, however there is an abundance of videos from the series floating around on the internet; also you can buy the DVDs from Amazon.

The strange content means it can be flexible to fit around any type of drinking game rules, but the most straightforward would be to place bets on each horse and let the loser drink. The greatest thing about this game is that, even if you’re not drinking, these videos will keep you entertained for hours on end.