11 Japanese Dishes That Taste a Lot Better Than They Look 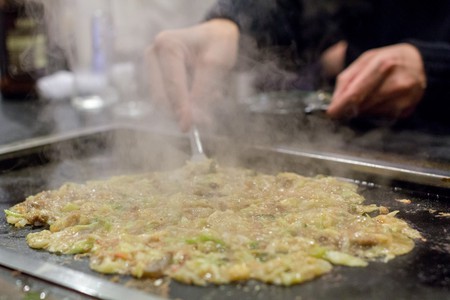 Japan is a culinary wonderland. From high-end dining to grabbing a bite at convenience stores, the country is overflowing with some of the most delicious dishes in the world. If you want to try the full gamut of everything Japan has to offer in the food department, you can’t be squeamish, especially when it comes to how your dishes look. Sure, sushi is pretty, but in reality the country is filled with delicious yet ugly offerings – here are just a few.

Most people know okonomiyaki, often referred to as “Japanese pizza” or a “Japanese pancake” depending on where you’re from, which is basically a pancake-looking mix of batter, meat, seafood, and vegetables all fried on a hotplate. Well, now it’s time to meet monjayaki, okonomiyaki’s ugly cousin. Most popular in the Kanto region, in the plainest terms, this dish essentially looks like vomit. A runny, almost paste-like consistency, this fried delicacy may not win any beauty contests, but next time you see it on the menu at an okonomiyaki place, give it a try and you’ll be very pleasantly surprised.

A slightly more controversial addition, natto is a love-it-or-hate-it kind of food, and the love-to-hate ratio is split down the middle. Known as a Japanese superfood, these slimy soybeans have been fermented with a bacteria that’s meant to do wonders for your digestive health. Covered in a stretchy film of bacteria, the beans look like the frothy little eggs of an alien insect. Beyond the texture, many people can’t quite handle the smell, which has been described as somewhere between dirty feet and hot garbage. Typically over a fresh bowl of hot rice, it’s been a Japanese breakfast staple for eons.

In English, umibudo translates to “sea grapes,” but in reality it’s actually a type of seaweed typically found in the tropical area of Okinawa. Also sometimes called “green caviar,” it’s a very unique delicacy that bursts in your mouth, unleashing tiny little flavor explosions that are probably most adequately described as tasting like the salty sea. The best way to enjoy them is like the locals do, as a salty little beer snack.

Incredibly unappealing both in the looks department and in description, shirako is the seminal fluid of a fish, or, in a more basic term, fish sperm sacks. A creamy, almost custard-like taste, you can order it from many Japanese izakayas (bars) and sushi restaurants. For a more palatable experience, perhaps just consider it the male version of caviar.

Have you ever eaten a snake? How about an eel? Well, if you’re in Japan don’t miss the chance to try unagi, grilled freshwater eel that’s actually a relatively expensive local delicacy. Not the pretties of dishes, it’s most popular during summer. Unagi is typically eaten simply, covered in sauce and served over white rice. Famous for its stamina-giving properties and unique taste, unagi is so popular in Japan it has its two widely celebrated eel-eating days, July 25 and August 6.

Have you ever had the craving to eat the coagulated skin off a hot bowl of milk? Probably not, but once you try yuba, that may change. Looking like pale wrinkly strips of soft skin, yuba is a type of tofu most typically found in more traditional-style restaurants. Basically just the skin that forms on the top of a boiling pan of soy milk, its taste is delicate, so it’s best enjoyed with a savory sauce-type topping.

In Japanese, tako mean octopus, and senbei means rice cracker, but tako senbei is a little different than your typical cracker. In fact, tako senbei is a crispy sheet created from the dried out, super flattened carcass of an octopus. Popular in beachside towns like Kamakura, not too far from Tokyo, eager visitors line up to watch the senbei masters squish and squeeze an octopus into this almost impossible paper thin sheet on which you can still see the octopus’ tentacle outlines. Mellow and almost sweet, it’s unlike any other rice cracker you’ve ever tried.

finally got to taste fresh made octopus cracker from enoshima island – a whole octopus mixed with some dough and pressed in an old mechanical press on a hot stove until flat and crispy – you can still see the tentacles 🐙🐙🐙. tastes a bit dry and it would be great with some hot chili sauce 😋

Looking like chicken nuggets gone wrong, nankotsu are fried balls of chicken cartilage, typically enjoyed with a beer at a local hole-in-the-wall izakaya. If you’re a meat-eater in Japan, be ready to enjoy every inch of the animal. On the menu of many yakiniku (cooked meat) places you’ll find a special section dedicated to mysterious delicacies, and trust us, nankotsu is one of the more conservative options.

These traditional Japanese sweets look like little poops, or little chubby brown worms, but in reality they’re almost a crispy chip version of a donut. Consisting of flour, yeast, and covered in brown sugar, they’re simple, and deceptively easy to eat. More of an omiyage (souvenir gift) snack than a supermarket staple, you’ll typically find these at a number of classic tourist destinations around the country.

These tiny little baby sardines are almost so ugly they’re cute, and sprinkling them on your hot bowl of rice feels like it could be a crime, but once you taste them you won’t regret it. Salty and crispy, these semi-dried fish are claimed to be full of calcium and a myriad of other health benefits.

Looking like weird red, raw, gooey sausages, tarako is salted roe often served in ongiri, with pasta, or eaten by itself. Salty and fishy, cod roe are the ripe fish eggs that are incredibly popular in a broad selection of Japanese dishes. Though salty fish eggs mixed into creamy pasta might sound like a culinary nightmare, it’s actually one of Japan’s weirdly wonderful culinary combinations.