11 Bizarre Music-Themed Bars From Around the World 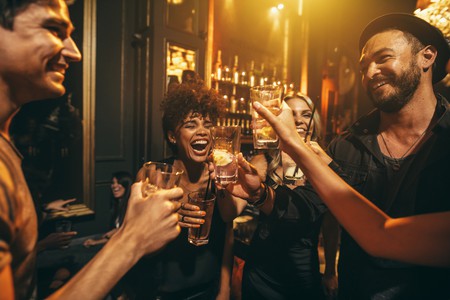 There are zillions of kitschy music-themed drinking dens around the world, whether it’s cringeworthy Yellow Submarine bars or Abba’s new Mamma Mia! restaurant, where punters weep into their hummus while somebody bellows ‘Chiquitta’ into their ears. But the planet also teems with more unusual fan pubs such as these shrine-like saloons here…

In the ex-Soviet states, Depeche Mode are bigger than the map on Mikhail Gorbachev’s head. Which explains this Estonian boozer. Set up by a hardcore fan in 1999, the bar is festooned with Violator red flowers and serves cocktails with names like ‘just can’t get enough’ and ‘master and servant’.

As the autographed walls attest, the kinky synth dark-lords have visited twice before, along with Depeche copyists, Hurts. But with non-stop Mode playing on the videos and stereo, there isn’t much chance to enjoy the silence (sorry!).

David Bowie and Blackpool don’t make obvious bedfellows. After all, you can’t imagine the Thin White Duke appearing with cheesy comics and dancing dogs in an end-of-pier revue. Yet, this family-run café (which also doubles as a tapas joint) has enough Bowie pics on the wall to rival V&A’s 2013 exhibition, along with a Ziggy Stardust-era-themed menu, taking in the ‘life on mars’ chocolate milkshake (key ingredient: Mars chocolate), a ‘bean genie’ chilli plus a cheesecake whose strawberry coulis squiggle owes something to Aladdin Sane’s lightning-bolt.

Their latest innovation is Bowie afternoon teas. But forget dainty cakes neatly arranged on chintzy china – at Ziggy’s, the comestibles are served on a tier of vinyl and compact discs. 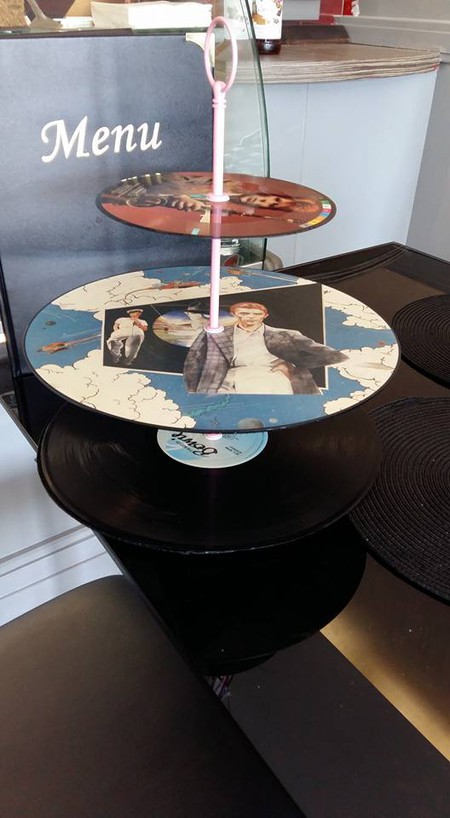 Sadly this isn’t a canteen canonising the career of scruffy 1990s indie-rockers Carter USM. Instead, it’s a fancy hip hop-themed restaurant that worships Shawn Carter and his wife (aka Jay Z and Beyoncé). You’re never too far away from pop’s biggest power couple in The Carter.

They crop up in the restaurant’s street art, while the décor is inspired by Jay Z’s 40/40 Manhattan bar. Meanwhile, dishes include ‘Carter chicken wings with Bey’s hot sauce’, the ‘Biggie 1kg T-bone steak’, and a ‘crooked Hillary’ cocktail. 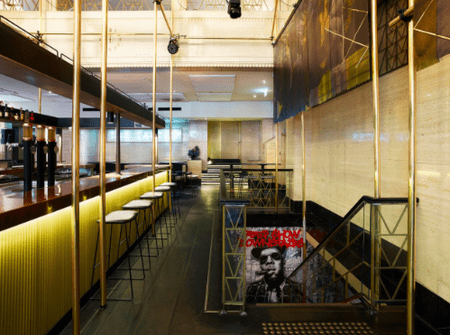 Freddie Mercury was born on this African island, but he’d probably be having a heavenly hissy fit if he knew his most cherished dishes such as ‘Freddie’s favourite salad’ were served by this beachfront restaurant. The prima donna also wouldn’t be happy that a Freddie Mercury theme has somehow been translated into screening international football matches either. 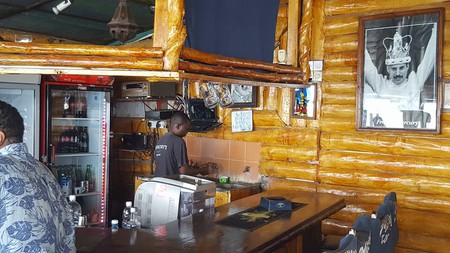 One of two Yorkshire bars set up in homage to the Mancunian rabble-rousers (the other one’s in York), this student-friendly bar amps up the Madchester vibe with its ‘swap jumper’ neon signs and ‘melons twisted!’ hand-stamps. For some reason, Lily Allen’s face is plastered on the door to the women’s loos. 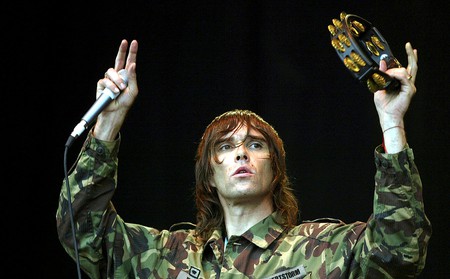 The King only graced UK soil once, stopping at Scotland’s Prestwick Airport for a mere 90 minutes on his way home from military service in Germany in 1960. To commemorate the event, some bright scamp set up this Elvis-themed bar at Glasgow’s second airport. There’s no menu online, so you’d have to visit Glasgow to see whether this airport bar combines Elvis’s and Scotland’s love of batter-heavy foodstuffs by serving up deep-fried peanut butter Mars bars. 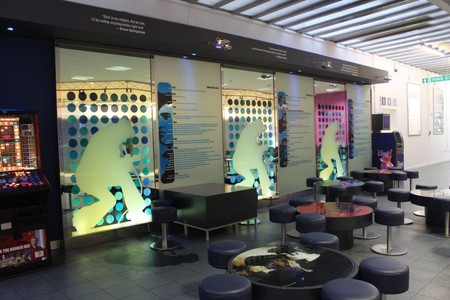 Meet Tokyo Bob. He’s a Japanese Dylan impersonator who performs regularly at Polka Dots, his basement dive-bar shrine to The Bard. The grizzly poète maudit is so big in Japan, for the past five years, scores of fans have apparently gathered at Polka Dots on the day the Nobel prize winners were announced, in the vain hope their hero would be one of the recipients.When he was finally crowned winner last year, the patrons were ecstatic. 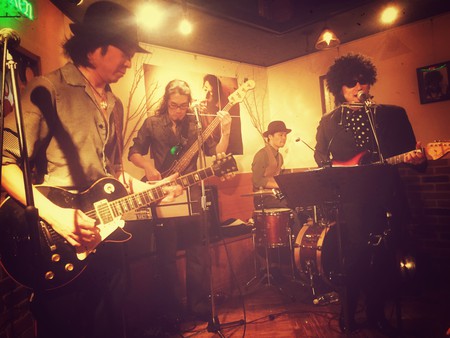 The late hell-raiser used to rock up at Sunset Strip’s Rainbow Bar & Grill every night when he wasn’t touring, playing the one-arm bandits machine while guzzling Jack Daniel’s-and-Coke (later switching to clear vodka for ‘health reasons’) and speaking to nobody.

In the last days of his life, the Rainbow owner even brought a video game machine to Lemmy’s apartment so he could play from his bedside. The metaller has been rewarded for his decades of custom with a life-size statue, memorabilia, mural and patio-drinking area in his name. 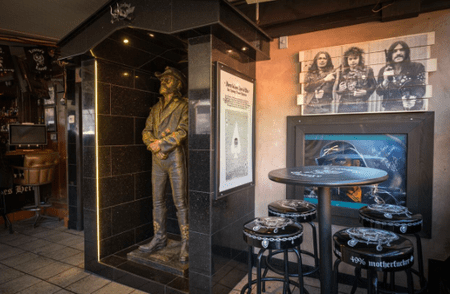 Apparently given the thumbs-up by the Britpop Modfather himself, this Japanese fan-bar boasts British beer, The Jam memorabilia and events which span the eclecticism of the man himself, ranging from soul nights to punk nights. Its curiously pluralised name means The Wellers could also be a tribute bar to Paul’s family. Which would be weird. 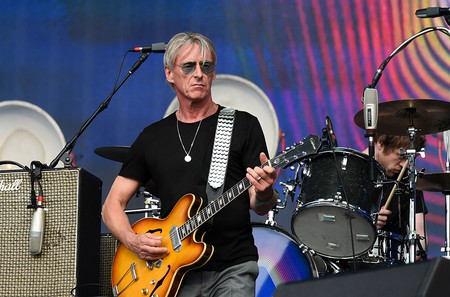 Tiny Texas faux-dive paying homage to the Man in Black. Order the fluorescent-pink ‘a drink named Sue’ (something you can never imagine Johnny Cash drinking) and contemplate the country star’s magnificence while chowing down on beef brisket BBQ. There’s another Johnny Cash-themed restaurant in Arizona too. 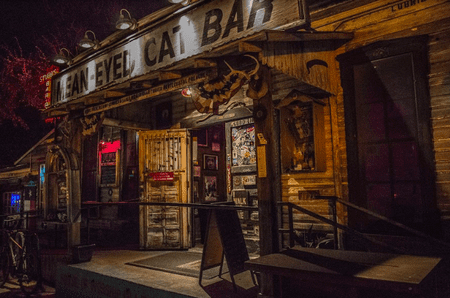 Okay, it’s not technically a theme-pub, but the yoga classes at Namasdrake (see what they did there?) do take place in a bar, in Los Angeles’ Arts District. The instructor describes Drake’s as the ‘perfect music to flow to’, with chakra-devotees striking bridge poses to ‘Hotline Bling’. Apparently NamasYe (Kanye-themed yoga) is in the offing too… 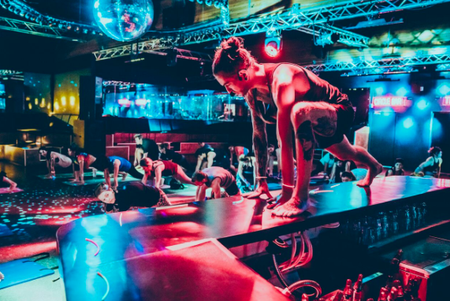