Things Every Traveller Should Know Before Going to Japan 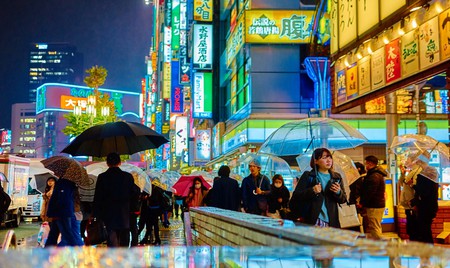 Tokyo, glistening in a mix of Blade Runner and post-impressionism. Taken outside Shinjuku Station (2014) | ©Moyan Brenn/Flickr

Encompassing timeless traditions and technological triumphs, Japan is a fascinating place to experience. If you’re planning a trip to this mountainous country, here are some need-to-know cultural cues to help you navigate your way around that all-important Japanese etiquette.

Experience Japanese culture to the fullest on our epic 12-day small-group adventure around the country. With a local insider leading the way, you’ll never have to worry about getting lost or cultural faux pas.

Japan is largely a cash-based society. It’s not unusual to carry tens of thousands of yen in your wallet here – the country’s low crime rate means very little risk of losing it. Although the larger shops and most hotels accept credit cards, you’ll find it difficult to get by without money in your pocket, with many restaurants and services only accepting cash. If you get in a tight spot, stop by the nearest 7-Eleven to use a 24/7 cash machine. Tap-to-pay travel cards, such as Suica and ICOCA, are also very useful – just remember you need to pre-load them with cash before travelling. 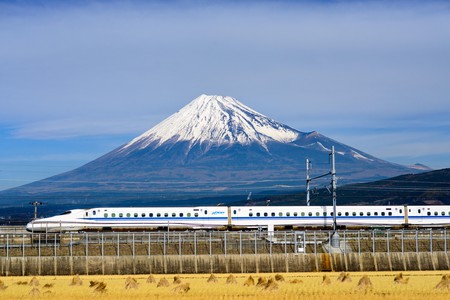 With 158 lines and 4,715km (2,930mi) of tracks in Tokyo alone, Japan’s rail network can feel overwhelming for first-time visitors. But as railways are the most efficient method of passenger transportation in Japan – with frequent services, rare delays and excellent value regional passes – taking a train is your best option when on the go. Don’t miss out on experiencing a Shinkansen (bullet train) ride, which will cut the journey time between Osaka and Kyoto to just 15 minutes. For inner-city travel, keep in mind the metro doesn’t run 24/7.

Before the introduction of GPS, finding a Japanese address was a bit like looking for the Holy Grail. Rather than having street names, city blocks are given numbers – leaving the roads in between nameless. And if that wasn’t confusing enough, you’ll find that house numbers aren’t sequential within a block. As a result, it’s common for postal workers to memorise their routes by family name rather than by house number. All is not lost, however: in Tokyo, you can find the subdivision name, district number (chōme) and block number (ban) on most light poles. 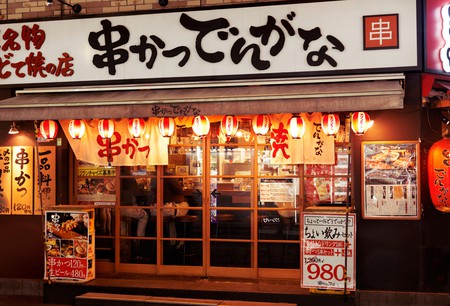 Food culture is huge in Japan, so make sure to spend time perusing the local restaurants | © imageBROKER / Alamy Stock Photo

The Japanese word kuidaore (食い倒れ) means to bankrupt oneself by indulging in food. And with more three-Michelin-starred restaurants than anywhere else in the world, food culture is a big deal here in Japan. For cheaper eats, you’ll find that long street queues at mealtimes are down to a good reputation – so join locals in the know. But be aware: foreigners may get turned away from some restaurants – proprietors may wish to avoid awkward encounters with tourists uninitiated in local customs, and others will only welcome those introduced by a trusted patron. 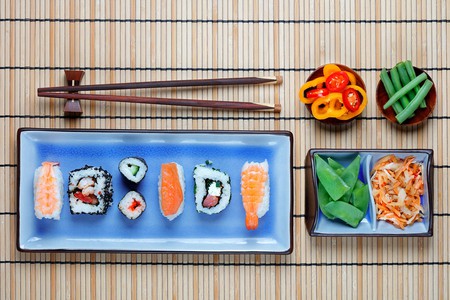 Chopsticks should never be used to point, stab food or be left to rest vertically in sticky rice (as this resembles a funeral rite). Instead, place chopsticks across your bowl when finished, or put them to the right of your dish if not – but be sure the tips don’t rest on the table. When drinking together, it’s polite to refill each other’s glasses rather than just pouring your own. Wait for someone else to top up your glass and do the same for them – if you don’t want more, simply leave your glass full.

You don’t need to tip in Japan. In fact, if you do, there’s a chance you’ll be chased down the street and have the money returned as if you left it behind by mistake. Japanese culture values hard work and dignity; as such, good service is expected and leaving a tip can be considered disrespectful. And remember, service staff are paid a living wage here, so don’t feel guilty. A notable exception is if you have a nakai-san (private concierge) during your stay at a ryokan (traditional Japanese inn). Here, you’ll pay the tip (enclosed in a special envelope) at check-in – the standard is 1,000 yen per person.

Take off your shoes 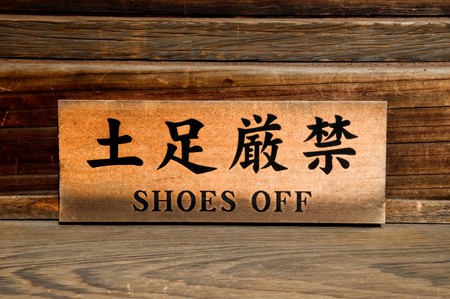 A major taboo in Japan is to enter someone’s home with your shoes on. Removing your shoes at the door of houses, some restaurants and most dressing rooms is an absolute must – look out for a differing floor height at the entrance for the cue to do so. Some restaurant restrooms will provide bathroom slippers for you to wear while using them – just make sure you leave them inside and not walk them back to your table by mistake.

It’s rude to eat while walking

Although it may be familiar to walk down the street while eating a snack or sipping a coffee, to do so in Japan can be considered rude. You’ll find that when most people order from a vending machine or convenience store they’ll consume the treat immediately to avoid walking with it. The same goes for smoking – you should only smoke in designated spaces.

Wash before getting in an ‘onsen‘ 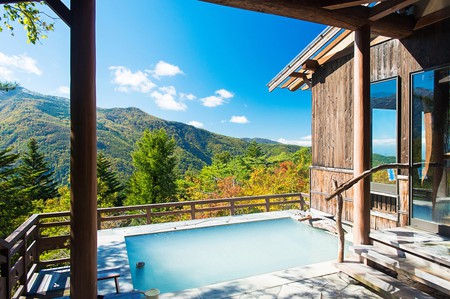 An onsen is a natural hot spring bath, and thanks to Japan’s ample volcanic activity, the country has lots of them. If you visit, there are rules to follow. No swimming costumes are allowed – you must be naked like everyone else will be. Make sure to wash in the showers provided before getting in and tie up long hair. Don’t be tempted to dunk your head under the water, either – this is all to avoid contaminating the healing waters with outside germs.

Tattoos tend to be associated with the Yakuza gang in Japan, and displaying them openly – particularly in an onsen – is considered taboo. But, if your tattoos are small and discreet, some public pools and baths will provide waterproof stickers for you to wear to cover them up while visiting. Attitudes, in general, are changing, particularly towards foreign visitors – but you can still expect a few stares.

Hold on to your rubbish

For a country so clean, it’s remarkable how few public bins you’ll find on the streets. They can be found by convenience stores, vending machines and some train stations, but for the most part, you’ll find yourself holding onto your rubbish until you return home or back to your hotel. If you are lucky enough to come across a bin, make sure you drop your waste in the right slot – combustible, non-combustible and recyclable receptacles are usually side-by-side.

It’s always worth making an effort with the local language, even if English is spoken by some in Japan. Here are some useful words and phrases worth knowing:

*Doubly useful as it can be used to get a person’s attention, and also to apologise.

*You’ll find this is rarely used.

*Mainly used when answering the phone.

If you say itadakimasu before you begin eating, you’ll impress people with your manners. This phrase expresses humility and gratitude for the meal you are about to enjoy.