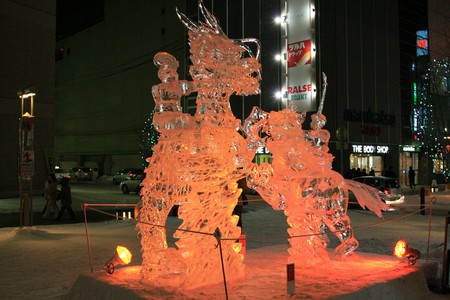 With long, cold winters and heavy snowfall, Hokkaido natives have organized several winter events and celebrations to make the toughest season of the year a little more bearable. Local festivals such as the Sapporo Snow Festival and the Asahikawa Winter Festival had humble beginnings, but have since grown in ceremony and popularity to the point where they now draw millions of tourists from all over the world.

The Asahikawa Winter Festival takes place for five days in the beginning of February and is the second largest winter festival in Hokkaido after Sapporo Snow Festival. Starting out in 1947 as a small, local event, the festival was expanded in 1960 to include more attractions . It has two main sites, Asahibashi, which features snow sculptures, snow slides, snowmobile rides, and an ice bar, and Heiwa Dori, an illuminated pedestrian street lined with ice sculptures that are judged in the annual ice sculpture competition. In essence, the town becomes a winter wonderland of snow, ice, illumination, and drinks for five straight days.

Zoo in a dream

Each year there is one main snow sculpture located at the Asahibashi site. The sculpture has a different theme every year.

50 ice sculptures line the Heiwa Dori pedestrian street, which is the second and smaller site of the festival.

These snowmen are modelled on the Japanese daruma, a small red doll seen as a symbol of good luck. Daruma are typically given as gifts of encouragement at the start of the new year.

The tunnel of light

Hikari no Tonneru (Literally, tunnel of light) runs along Nanajo-Ryokudo Street and is one of the best romantic spots for couples.

The theme and style of each ice sculpture are up to the artist’s discretion. Some are cute while others are more striking or symbolic of a cultural or religious aspect of Japan.

In the evening, the ice sculptures along Heiwa Dori are illuminated in various colors, creating a wondrous and fantastical atmosphere.

Asahibashi is also illuminated in the evening by multi-colored candles arranged in unique shapes and designs.

Festival goers are treated to hanabi (literally, “fire flower”, the Japanese expression for a fireworks show) at the end of the festival.