Japan has always been one of the countries at the forefront of technological advances. It is not a surprise that artists from the country are therefore also drawn to the potentials of using technology and scientific knowledge to create mesmerizing works that alter our perception of reality. We bring you 10 artists who are changing the meaning of art by juxtaposing art, design, science, and technology and playing with illusions to alter our perception of the everyday.

Sachiko Kodama (b. 1970) bridges art and science to create works that express the infinite possibilities of nature and the potentials of scientific research. She is best known for her works made using ferrofluid, a dark colloidal suspension of magnetic nano-particles dispersed in solution that remains strongly magnetic in its fluid. Kodama builds special ‘environments’ or installations that manipulate magnetic waves to construct complex three-dimensional ferrofluid forms. Kodama draws from humanity’s desire to modify physical materials and render them more flexible—a manipulation of nature in its purest form. Through her artworks, as opposed to other artists who create the illusion in pictures or moving image, Kodama creates ‘objects’ that transform as she designs. Protrude/Flow (2001) is an interactive installation that expresses the dynamics of fluid motion of a physical material, the dynamics of organic, wild shapes and the movements of liquid by means of digital computer control. 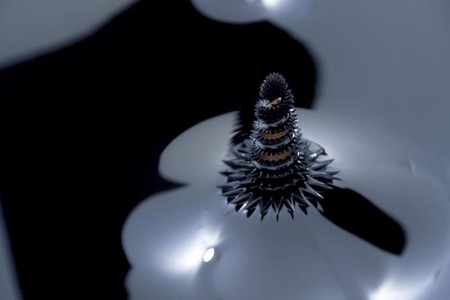 Tetsutoshi Tabata is a visual installation artist, who is deeply involved with dance performance and projected scenography. In 1994, he co-founded 66b/cell, a collective using real time and pre-recorded computer graphics and animation to create different textures, lighting and kinetic effects. Currently, he is developing an original multiple projection imaging system. A work he developed with his collective, Living Lens (Kobe Biennale, ‘Art in Container’, 2009) — motivated by the concept of ‘poetic felt space’ — was conceived as a garden/habitat with an organic cycle of time and comprised projected images, sounds, and bodies of viewers. The created environment integrated an advanced visual technology called ‘Saccade-based Display’, which uses the scanning feature of human eye movements—saccades—to perceive image arrays via a LED display system. The visuals in the projects derived from images of Australian plant, animal and landscape textures, while the interior installation within the shipping container was inspired by elements of traditional Japanese garden design. 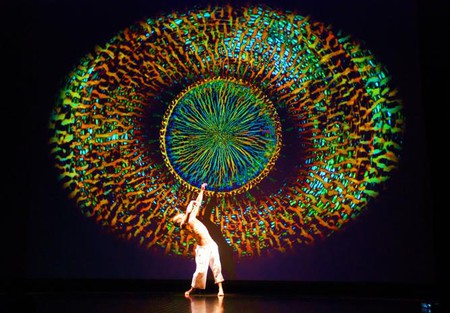 Daito Manabe is a composer, computer programmer, designer, DJ and VJ who creates innovative projects in the field of art and technology. His ‘performances’ explore the ways in which our body interacts with advances in technology and proposes possible hybrids—both existing and yet to come — between man and machine. In his works, he has experimented with myoelectric sensors to transform people’s faces into drum machines, using trainers as sound mixers and fitting LEDs to teeth. In a project, he visualised FaltyDL’s music using jerky, electrified movements of the human body. At Sónar 2014, Manabe presented a new interactive show that combined video mapping and contemporary dance. He uses his skills in music and programming to create scenarios that change the perception of how our own bodies interact with technologies. For instance, during his shows, he controls music—as a DJ—using electrical impulses from his facial muscles, and he even has fitted his Nikes with sensors that trigger and manipulate sound. 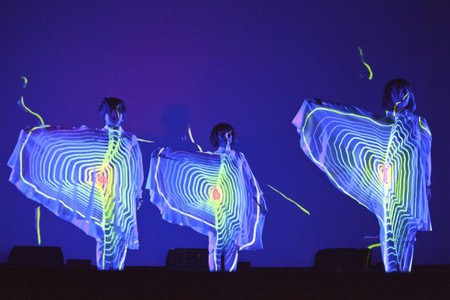 Multimedia artist Ryota Kuwakubo (b. 1971) designs and builds his own electronic devices, which appear as low-tech gadgets, such as Bitman (1998), a movie display device using pixels made in collaboration with collective Maywa Denki. Kuwakubo works with various media, usually involving digital or electronic elements, and explores themes centering around the relationship between contrasting matters — analog and digital, human and machine, sender and receiver of information, among others. His work engages with the viewers, making them necessary participants in the final result. In 2011, Kuwakubo created The Tenth Sentiment, an installation that utilized everyday, domestic objects, arranged on the floor of an empty room. An electrical model train fitted with a LED light maneuvered along a set of tracks arranged in a way that the light would shine on the objects and cast large shadows on the wall. These shadows took the form of moving people, cityscapes, tunnels and a variety of others, creating an immersive installation for the people moving around the room. 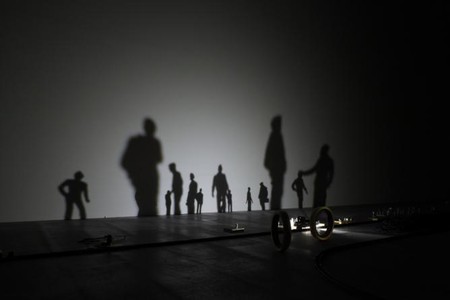 Koki Tanaka observes the everyday — life and its small, indifferent details — and transforms it into magical and fantastic events, arranged with a unique sense of humor and a pungent analysis that reveals the strange and uncanny in our existence. At the core of his practice lies a collaborative approach that involves a sense of community, and stresses the importance of participation in the processes of creativity and imagination. His videos capture simple gestures, giving them renewed intensity and meaning, such as in Process of Blowing Flour (2010). His eight-channel video installation Everything Is Everything (2006) sees the artist and his assistants interacting with a variety of everyday objects, to the point of testing and extending their physical properties, making them acquire a new significance or function. In other works, the performative action is extended to a larger group of people — other than himself — like in his first collaborative work A Haircut by 9 Hairdressers at Once (second attempt) (2010) in a hair salon in San Francisco or in his Precarious Tasks series such as Swinging a flashlight while we walk at night; Talking about your name while eating emergency food; Sharing dreams with others and then make a collective story. 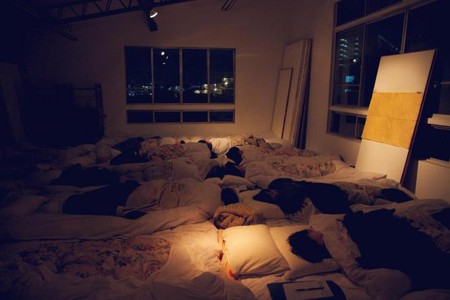 Koki Tanaka, Precarious tasks #4 sharing dreams with others, and then making a collective story, 2013 | © Courtesy of the artist, Vitamin Creative Space, Guangzhou and Aoyama Meguro, Tokyo

Award-winning artist and designer Tokujin Yoshioka creates immersive installations that seem to expand space into infinity and embrace sensations of peace and tranquility. His nature-inspired futuristic environments bridge art, design, science and technology, to provide extreme sensory experiences. In 2010, he created a work entitled Snow — a 15-meter wide installation mimicking snow, not only visually but also in its movement and tactility, at the Mori Art Museum’s Sensing Nature exhibition. The snow, represented by hundreds of kilograms of feathers, was blown around in a giant aquarium-like glass case. Yoshioka’s solo show Crystallize at MOT (Museum of Contemporary Art Tokyo) in 2014, featured a series of work inspired by the self-generating, self-organizingprocesses found in natural phenomena. Swan Lake was painting drawn by the vibration of music, while Rose was the sculpture of a crystallized flower. The installation Rainbow Church was built of crystal prisms and created a magical surrounding of colorful refracting lights and illusions.

With an education in landscape gardening and horticulture, interdisciplinary artist Taro Shinoda (b. 1964) creates work that stems from his passion for nature and his interest in understanding the universe — including cosmic space — as a nature in process of evolution, in which nature coexists with human activities. Shinoda explores themes of desire, meditation, and adaptation, and he draws from his extensive and varied knowledge of natural sciences, engineering, architecture, and landscaping. His sculptures and installations feature highly technological hand-built components, juxtaposed to elements of the traditional Japanese garden — a recurring theme in his oeuvre. For his film work Lunar Reflection Transmission Technique (2007), Shinoda was inspired by his childhood memories of trying to communicate with his mother over great distances. He built an astronomical telescope out of corrugated cardboard with an attached video camera and filmed the moon from various worldwide locations, including Istanbul, Boston and Tokyo. 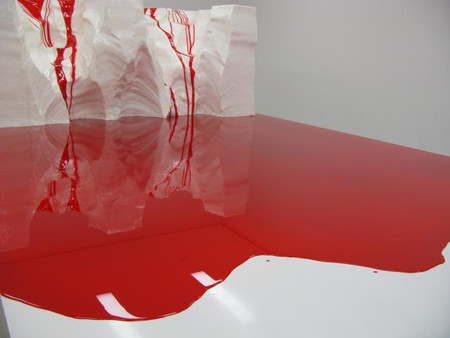 Sculptor and installation artist Tatsuo Miyajima creates highly technological work that employs materials such as electric circuits, video and computers, centering around the use of digital light-emitting diode (LED) counters — or ‘gadgets’ —since the late 1980s. Miyajima’s core artistic concepts – ‘Keep Changing’, ‘Connect with All’, and ‘Goes on Forever’ – exist alongside and draw inspiration from humanist ideas and the teachings of Buddhism. His work is informed by an interest in ideas of continuity, connection, eternity, and the flow of time and space. In addition to creating hypnotizing works with flickering lights and number displays counting from 1 to 9 ad infinitum, Miyajima also builds immersive installations, such as his life palace (tea room), 2013. A chamber, covered in red leather on the outside, hosts one visitor at a time into a cavernous constellation of flickering digital numerals and blue lights. The environment created within the work encourages contemplation and isolation—philosophical aspects that in today’s frenetic metropolitan life are seldom attained.

The minimalistic and futuristic vision of Mariko Mori takes expression in works in a diverse range of media, including video, photography, new media and installation. Her oeuvre encourages a reflection on our relationship with technology and the potentials of our interaction with it. An underlying, recurrent theme in her work is also the juxtaposition of Eastern mythology and Western culture. Mori explores the borderline between reality and utopia, and provides a synthesis of opposites such as reality and fantasy, seriousness and humor, man and machine, technology and nature, science and religion. In her acclaimed Wave UFO (1999-2002), which was also part of the Venice Biennale in 2005, is a futuristic ship-like interactive installation that takes the form of a teardrop. Three visitors at a time enter the space to experience a three-minute computer-generated light show based on projections of their own brain waves, followed by a three-minute graphic animation sequence by Mori.

New media and sound artist Ryoji Ikeda creates immersive installations that engage with sound in a variety of ‘raw’ states—sine tones and noise—often using frequencies at the edge of human hearing range. The computer-generated sounds visually transform into video projections and digital patterns. Ikeda’s installations, through the use of scale, light, shade, volume, shadow, electronic sounds and rhythm, provide a synthetic experience. For his renowned Test pattern [no.5], he uses five projectors to illuminate a 28-meter long 8-meter wide floor with bar-code and binary patterns of zeros and ones converted from data including text, sounds, photos and movies. Ikeda also creates one time performances, like his datamatics [ver.2.0] audiovisual concert. He examines and applies mathematical and scientific methods to shape music, time and space. Through his work, Ikeda is able to reveal the complexities of human perception, by manipulating and transforming the physical properties of sound and vision through digital technology. 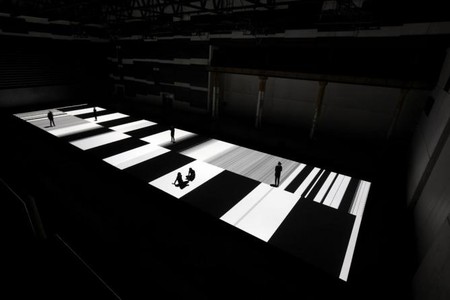 Ryoji Ikeda, test pattern [no.5], 2013, audiovisual installation at Carriageworks. Commissioned and presented by Carriageworks and ISEA2013 in collaboration with Vivid Sydney. Image Zan Wimberley | © Carriageworks/WikiCommons
Give us feedback