The life of Pramoedya Ananta Toer, one of Indonesia’s leading intellectuals and celebrated author of over thirty works of politically-charged fiction, often seems more incredible than the stories he created. Pramoedya’s books and outspoken politics led him to be imprisoned for 15 years – first by Dutch colonisers then by the Suharto government. 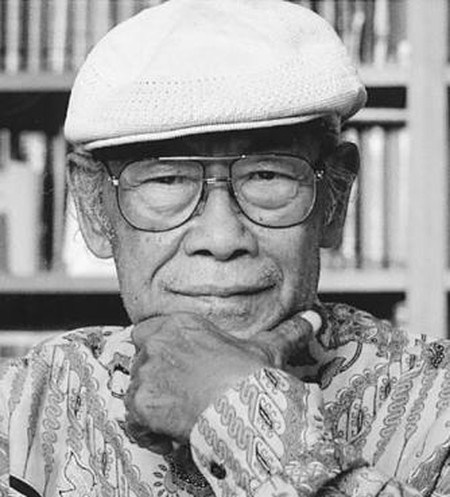 To read the work of Pramoedya Ananta Toer is to follow Indonesia’s political struggles through colonisation and postcolonial authoritarian regimes. His most celebrated works are four novels which collectively are known as The Buru Quartet. The novels,This Earth of Mankind, Child of All Nations, Footsteps and House of Glass, follow the life of a Javanese minor royal called Minke and the humiliation he experiences as his country undergoes colonization. Infused with history and personal experience, Pramoedya’s work addresses the discrimination experienced under colonial rule through the intimate portrayals of individual stories.

The origins of these stories are an incredible feat in themselves as they were completed during Pramoedya’s 15-year incarceration. Pramoedya was already an established writer prior to his imprisonment and it was his increasingly critical political works that led him to become a government target. His captors thus specifically denied him writing implements as part of his punishment. Undeterred, and fearing he would never again be able to write, Pramoedya composed his tetralogy orally, telling the story in installments to an audience of fellow prisoners, over the course of his decade and a half in prison. In light of the circumstances under which Pramoedya created these stories, there is a distinct criticism of the Suharto regime implicit in these writings. While the novels explore the darker aspects of humanity, Pramoedya’s message is ultimately a positive one, a belief in mankind’s compassion, dignity and potential for greatness in the face of immense hardship.

Although Pramoedya was released in 1979, it was only in 1999 that his writing and travel ban was lifted. From then until his death in 2006, Pramoedya ceaselessly wrote and lectured around the world, gaining international recognition as a literary figure and political activist. The book Exile (2006) is an extended interview Pramoedya held with journalists André Vitchek and Rossie Indira during the last years of his life when he was no longer able to write himself. The interview acts as an autobiography of the Indonesian author and provides profound insight into the life of this remarkable figure and the works he created in the face of censorship, imprisonment and exile.
By Harriet Hu