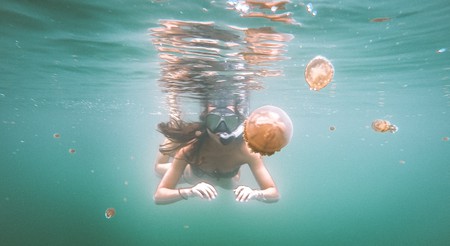 Our boat glides silently as we weave around towering boulders of ancient limestone. Beneath us, a delicate garden of coral shows off luminescent pinks, peaches and greens. We are sailing towards a tiny, uninhabited island, hidden within the Indonesian archipelago of Raja Ampat. Here, a dense curtain of rainforest-covered cliffs shelters a lagoon home to a rare and beautiful ecosystem.

We arrive at a small outcrop, mooring our boat against a lonely dock. At first glance, the island seems impenetrable, covered in dense rainforest and sharp limestone karst. With help from our Indonesian guide, Kiikii, we scramble up the slippery boulders and conquer the steep 300-metre hike, coming face-to-face with the treasure within. 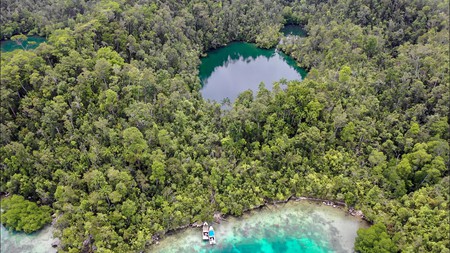 A jade-coloured lagoon glitters beneath our vantage point, isolated in the centre of the island. Despite looking incredibly inviting in the tropical heat, we have to resist carelessly jumping in. Kiikii reminds us to swim calmly, for this place is home to several delicate and rare species of stingless jellyfish.

Jellyfish Lake is one of only three places on the planet where people are able to swim with these creatures (at least, on purpose). The three species here developed their stingless bodies over centuries of living without predators. Specifically, they are known as: giant golden medusa, moon and cassiopea (upside down) jellyfish.

The lagoon is almost completely secluded from the outside world. Very few fish live here and those that do accidentally slipped through tiny crevices from the surrounding Ceram Sea as tiny spawn. Without predators or competition for space and food, the jellyfish bloom has been able to flourish.

As we slip into the refreshingly cool waters, we are immediately surrounded by peach globes, bobbing around with a nonchalant air. The further we swim, the more it feels like we’ve just jumped into a living, pulsating underwater ball pit. 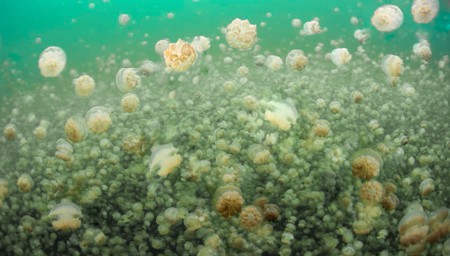 A bloom of half moon jellyfish | © Geri Moore

Hundreds of golden medusa jellyfish, some the size of volleyballs, others as tiny as golf balls, float in the abyss. They ricochet from our bodies, tumbling into an uncontrollable spin before stabilising and bounding away. Bulbous bodies pulse in rhythm, while tentacles dance in psychedelic motion.

Moon jellyfish, mesmerising with translucent, elliptical bodies, pirouette around us like a company of ballerinas. On the lagoon bed, the more subdued ‘upside down’ jellyfish lay head down and merge with the sea grass, shooing us away with their multicoloured tentacles.

This remote location plays a huge role in the survival of these jellyfish species. The only other places on Earth where you can swim with stingless jellyfish are in Palau and Borneo. The rarity of this encounter is a privilege, as human visitors are the biggest threat to these creatures.

In March 2017, local authorities closed the lake in the island nation of Palau, due to the negative impact that tourism and ocean warming had on the jellyfish population. In less than a decade, eight million of these creatures reduced to just 600,000. Their fragile bodies are easily damaged by brash swimmers, while chemicals from sunscreen, insect repellent and deodorant upsets their environment. 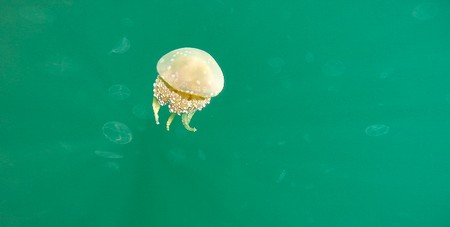 Indonesian local government and charities are working endlessly to protect Raja Ampat and its seas. Tours to Jellyfish Lake are only run by liveaboards, hotels or homestays in the area, so the number of visitors can be monitored and limited.

People from the local fishing villages are also playing an active role as guides and educators. They ensure visitors do not wear fins and opt for long-sleeved clothing for sun and insect protection over unfriendly lotions – simple but effective measures that go a long way.

Many Indonesians, like Kiikii, are passionate about protecting their home. Alongside working as a professional diver for the Misool Foundation, a conservation charity, he studies for his Masters degree in Fisheries.

Diving tourism is the most lucrative industry in the area and is incredibly important – both the local population and marine research charities benefit from the money that it brings in. The issue is doing it in the least disruptive way possible to the ecosystem. With his degree he hopes to not only continue their work, but develop conservation tourism and educate both the local population and visitors. Local initiatives like these ensure the jellyfish continue to flourish.

As we swim back to shore, Kiikii dives down into the lagoon for the last time. The jellyfish flock to him, as if bidding farewell to an old friend. He emerges from the dense crowd of celestial bodies, happily bobbing in the sun-dappled water, before they retreat into the depths of Jellyfish Lake.