The Ondel-Ondel Tradition Of Indonesia

Imagine walking down a street in Jakarta – camera hanging heavy around your neck, flip-flops slapping a rhythmic base-line with each step, sun cream sitting on the bridge of your nose – only to round a corner and come face to face with a two-and-a-half-meter-tall puppet person, smiling maniacally and heading right your way. While this might sound like a nightmarish scenario to the uninitiated tourist, musical performances using large wooden puppets are a traditional Indonesian ritual, and a happy occasion for the community. In Jakarta, the vibrant, non-stop capital of Indonesia, ondel-ondel can be seen lumbering around different neighborhoods every Sunday, asking for nothing more than a handful of change in return for a blessing.

Due to the size of ondel-ondel puppets, they must be constructed in such a way that they can be easily carried by one person. Woven bamboo is used to build the ondel-ondel‘s hollow shell, the faces are lovingly carved from wood, the hair is gently prepared from dried palm tree leaves, and the bamboo structure that makes up their bulk is carefully clothed in bright garments, often those specific to the Betawi tradition. Usually, ondel-ondel represent a man and his wife. The man is often red-faced and sports an impressive mustache, while the woman is rendered in white with pouting red lips reminiscent of a geisha. Both halves of the happy couple wear a spiky kembang kelapa headband.

Traditional ceremonies and rituals are a huge part of daily life in Indonesia, and even the most thoroughly modern families in Jakarta will think nothing of spending a few hours or even a whole day preparing offerings for a ceremony. This communal but contemplative time is as important as the ceremony itself, and gives people an opportunity to rest, regroup and make something with their hands, activities most of us seldom indulge in.

Influenced by the Chinese and Arab customs that filtered into the former Dutch East Indies through migration, the tradition of ondel-ondel is thought to ward off evil. For many, ondel-ondel represent benign spirits, deceased ancestors who watch over the neighborhood’s residents and their families. In addition, to invite ondel-ondel to perform at a ceremony or celebration is a way of protecting the guests from evil forces.

While superstitions about the necessity of protecting oneself from evil spirits cannot be said to have died out in Indonesia, some similar folk performances have waned in recent years, and although the ondel-ondel tradition is still regularly practiced within some communities, it has also become a tourist attraction. 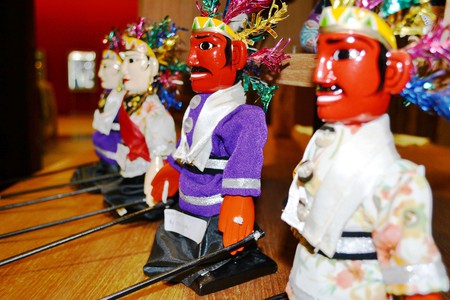 The Future of Ondel-Ondel

It’s hard to miss the sight of a two-and-a-half-meter-tall puppet bobbing up and down on the city streets, but it’s even more difficult to ignore the Tanjidor or Gambang Kromong music that often accompanies it. Modern ondel-ondel puppet-makers and performers, whose services are nowadays more often requested by fancy hotels than by village elders, have adapted ondel-ondel musical accompaniment to resemble modern Kromong music, and are going some way in getting more young people interested in the unusual tradition.

How long will Indonesia’s youngest generations continue the ondel-ondel tradition is anyone’s guess. It is impossible to say what the people of any one place or culture will believe in the future; but currently, whoever is around when the ondel-ondel come lumbering your way, one thing is for sure: each person will stop and smile and hand over their pocket change – just in case.