The Most Stunning Dutch Colonial Buildings in Indonesia

Lawang Sewu, Semarang | © Badroe Zaman/ Flickr
Indonesia’s long history makes it the fascinating country it is now. The Dutch colonised Indonesia from the 1800s until 1945, and left a lot of cultural heritage behind, in the form of language, customs, and buildings. Read our guide to the most stunning Dutch colonial buildings in Indonesia.

Building, Architectural Landmark, Historical Landmark
Add to Plan
Lawang Sewu, Semarang | © Ruth Onduko/ Flickr
Lawang Sewu means one thousand doors, and the building was built as the headquarters of the Dutch railway company. Like the name suggests, this building in Semarang, Central Java has many doors and windows. Built in 1907, Lawang Sewu incorporates classic architecture with technology that was innovative at the time. For example, one of the buildings has a cooling system that works by flooding the basement so the evaporation will cool the building. Nowadays, the building is believed by many to be a haunted place, with reports of ghost sightings.
More Info
Open In Google Maps
Jalan Pemuda, Jawa Tengah, 50132, Indonesia
Visit Facebook page

Building, Museum
Add to Plan
The Fatahillah Museum in Kota Tua, Jakarta | © siska maria eviline/Flickr
This exquisite building was Batavia’s (Jakarta’s) city center, built between 1707-1712. The design was inspired by the Dam Palace in Amsterdam. Museum Fatahillah was first called Stadhuis by the Dutch, and is an example of neo-classical architecture, with a beautiful yard, pool, and leafy trees. In 1974, the building was re-purposed by the Indonesian Government as a museum, showcasing historic relics found of Jakarta.
More Info
Open In Google Maps
1 Jalan Taman Fatahillah, Daerah Khusus Ibukota Jakarta, 11110, Indonesia
+62216929101

Building
Add to Plan
Bank Indonesia branch in Yogyakarta | © Orangescale Studio/ Flickr
This building has always been a bank, as it was first built as the eighth branch to the Dutch-established bank operating in Java. The majestic European-style building was designed by Marius Hulswit, one of the first professional architects in Indonesia sent by the Dutch to oversee the construction of several colonial buildings. It is strategically located near the presidential palace and Yogyakarta’s kilometre zero. Today, the building is the headquarters of Bank Indonesia, the country’s central bank.
More Info
Open In Google Maps
4-6 Jalan Panembahan Senopati, Daerah Istimewa Yogyakarta, 55121, Indonesia
+62274377755
Visit website

Building, Historical Landmark, Architectural Landmark, Archaeological site
Add to Plan
Bogor Palace, Bogor City | © Segmed87/Shutterstock
Bogor (or Buitenzorg) is a charming small town near Jakarta. During the colonial period, Dutch governors used to visit this place to relax in the beautiful nature. They loved it so much that they built a stunning palace, which was inspired by Blenheim Palace in England. They kept a well-maintained and expansive yard with big trees and hundreds of deer, imported from Nepal. After independence, the Indonesian Government has maintained the building. The country’s current president, Joko Widodo, personally selected this palace as his office, instead of the presidential palace in Jakarta.
More Info
Open In Google Maps
Istana Bogor Jawa Kulon, Indonesia

Building
Add to Plan
Bosscha, West Java | © Azmie Kasmy/Wikicommons
One of the oldest observatories in Indonesia, Observatorium Bosscha was built in the highlands in Bandung, West Java, 1310 meters above sea level. It was built in 1923, and was one of the first observatories in the southern hemisphere. It houses five big telescopes, which were cutting-edge technology at the time. The building is still a functioning observatory and an educational tourist attraction. Many more tourists are attracted here by the cool breeze, magnificent views, and iconic European-style buildings.
More Info
Open In Google Maps
No.45 Jalan Peneropongan Bintang, Jawa Barat, 40391, Indonesia
+62222786001
Visit website

Building, Museum
Add to Plan
Jakarta's National Museum | © Seika / Flickr
The building that now houses the Museum Nasional Indonesia was first built by the Dutch as a place of scientific study in 1778. The European classical style is evident in the towering pillars, tall windows, and interior. The building also has a Greek-style inner courtyard, which lets in natural light and air. After Independence, the Indonesian Government took the complex over and added new buildings, and used the building to store historic archaeological relics from all over the country.
More Info
Open In Google Maps
12 Jalan Medan Merdeka Barat, Jakarta, Indonesia
+62213868172
Visit website

Building, Cathedral, Museum
Add to Plan
The neo-gothic cathedral of Jakarta | © Seika / Flickr
Despite being the capital of the country with the largest Muslim population in the world, Jakarta has a glorious neo-gothic Roman Catholic Cathedral at its centre. The St. Mary of the Assumption Cathedral was designed and built by the Dutch in 1901, and many of the materials were sourced from the Netherlands, such as its massive pipe organ and the main altar. It resembles church buildings in Europe, with towering spires and tall pillars. Today, the church is still a place of worship for Catholics in Jakarta, and one of the buildings serves as a museum featuring Catholic relics.
More Info
Open In Google Maps
7B Jalan Katedral, Jakarta, Indonesia
+62213519186
Visit website

This iconic building is a landmark and tourism icon of the Bangka Belitung archipelago, off the coast of Sumatra. The lighthouse was built by the Dutch in 1882 to guard their ships as they entered the Indonesian archipelago from the north. It’s still operational today. Lengkuas Island is very popular for its pristine beaches, and tourists can also go up the 12-storey lighthouse for views of the whole island. 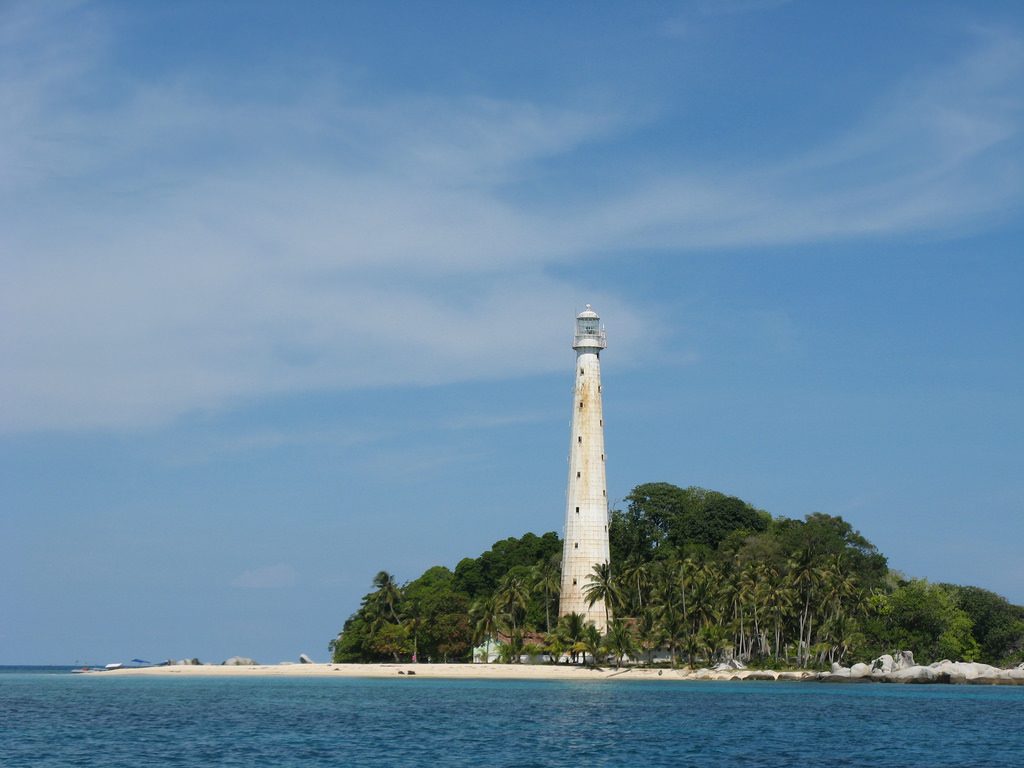