The Most Sacred Sites in Bali You Should Know About 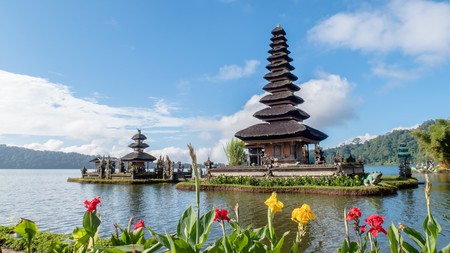 Perhaps the only things that match the intensity of Bali’s world-famous natural wonders are its cultural and spiritual charm. Many spots on the Indonesian island have all three of these factors, but unfortunately, the spiritual identities are often overlooked, outshone by the gorgeous views. From lakes and temples to forests and volcanoes, here are the most sacred sites in Bali that everyone should know about. 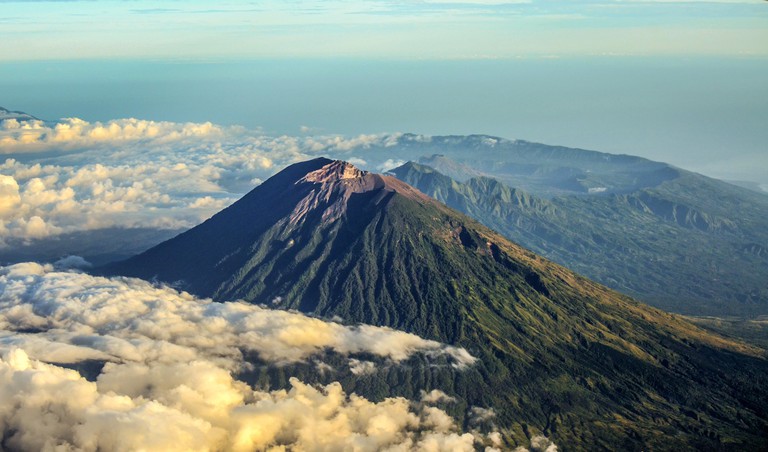 © Putu Artana / Alamy Stock Photo
Mount Agung is not only the tallest and one of the most majestic mountains in Bali; it’s also honored by the Balinese as the dwelling of the gods, specifically Mahadeva, the supreme manifestation of Lord Shiva. Among the constellation of four sacred mountains that divide the island into northern and southern parts, Gunung Agung is considered the most sacred by Balinese Hindus. Due to the mystical properties and challenging landscape, hiring a local guide is highly recommended. Before hiking, guides and locals will pray in one of the mountain temples, asking for safety and guidance. As cows are considered sacred beings, beef of any kind is prohibited in this area, and you should also be mindful of restriction signs – do not enter places you’re not supposed to. 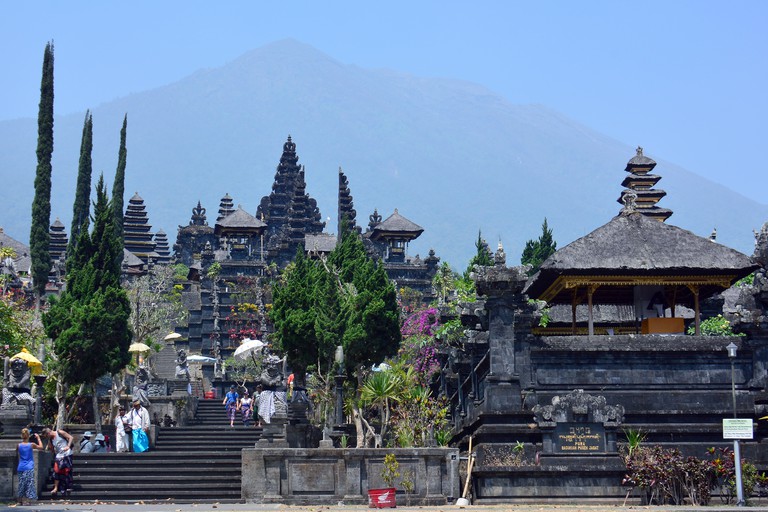 © Zoltan Bagosi / Alamy Stock Photo
Perched on the jungly slopes of the sacred Mount Agung is the great Besakih Temple, a supremely holy place. The compound comprises 18 temples scattered over a vast area, making Besakih the biggest temple in Bali. It is said that the temple was first built by a Hindu devotee from India named Rsi Markandeya, and it has since become the centre of religious activities for the whole island. This temple is open to the public, but some parts are strictly reserved for religious activities. To enter this temple, tourists are required to wear conservative clothing that covers their body, including their chest, arms and legs. 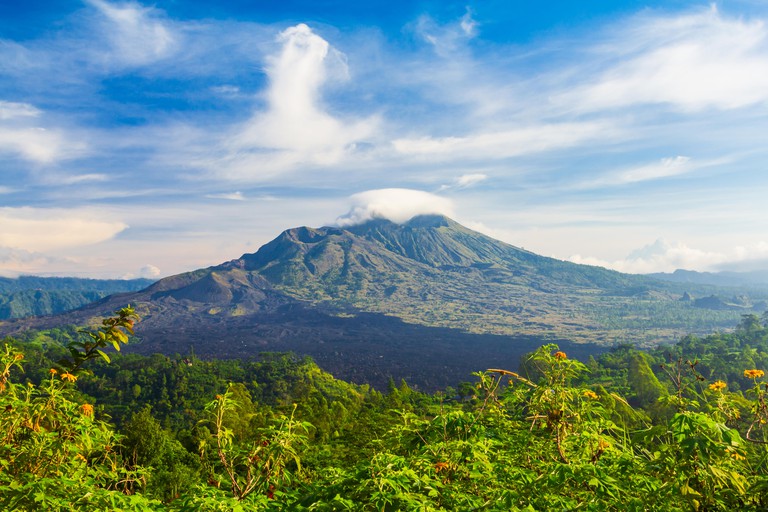 © Andrey Khrobostov / Alamy Stock Photo
Known as a spectacular sunrise spot in Bali, not many tourists realize that Mount Batur is actually one of the four primary sacred mountains on the island. Despite being the smallest among the four, Mount Batur is one of the most active volcanoes on the island, sitting on a huge crater formed from when it erupted thousands of years ago. Legend has it that when a massive eruption happened in 1926, a whole village was wiped out, but a holy shrine inside the mountain’s temple was perfectly preserved. Due to its lively volcanic activity, the mountain is believed to be the dwelling place of Lord Brahma, who is often symbolized with a fire ring. Locals bring forth sacrifices and offerings to this mountain during sacred ceremonies to purify the area from evil and keep a balance among the universe’s elements.

You can enjoy an unforgettable sunrise hike up Mount Batur on Culture Trip’s epic 12-day Bali adventure, led by our local insider. 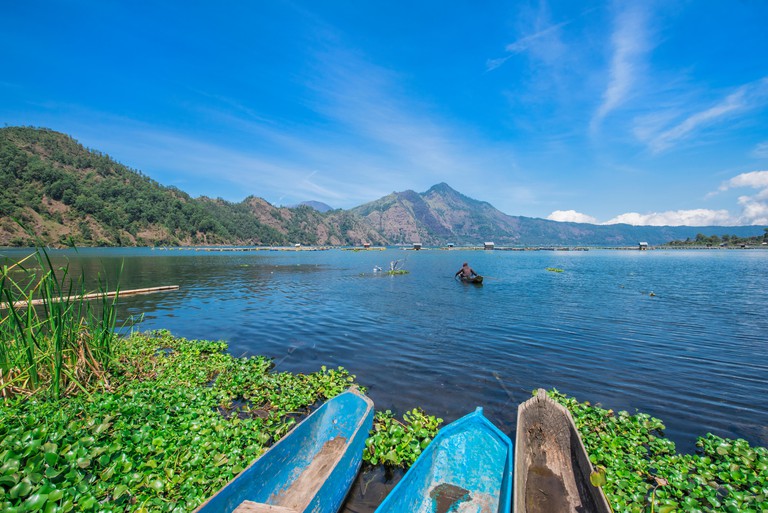 © Michel & Gabrielle Therin-Weise / Alamy Stock Photo
This crescent-shaped lake is located at the foot of Mount Batur, sharing the same beauty and sacredness. The volcanic lake is honored for being the main water source for the whole of central Bali. The fresh water is rich in minerals and feeds the flourishing rice fields in the area. The lake is associated with Dewi Danu, the goddess of water. Some of the water springs originated from this lake are considered sacred and believed to have healing powers. West of the lake lies the beautiful Pura Ulun Danu Batur, one of the holiest and most-visited temples in Bali.

Hindu Temple
Facebook
Email
Twitter
Pinterest
Copy link
Share
In 1926, the sacred Mount Batur erupted, wiping out a whole village, including a mighty temple at its foot. Miraculously, the temple’s most vital shrine remains intact, an 11-tiered meru roof dedicated to the ruler of water, Goddess Dewi Danu. The villagers took the shrine and rebuilt another majestic temple further up the mountain slopes. The exquisite compound with nine temples and 285 shrines now doubles as a popular tourist destination, partly due to the awe-inspiring tall temple architecture with the picturesque Mount Batur and Lake Batur in the backdrop. Even so, real culture enthusiasts realise how the picture-perfect temple holds a significant spiritual value for locals who depend on the water goddess to bless their fields. 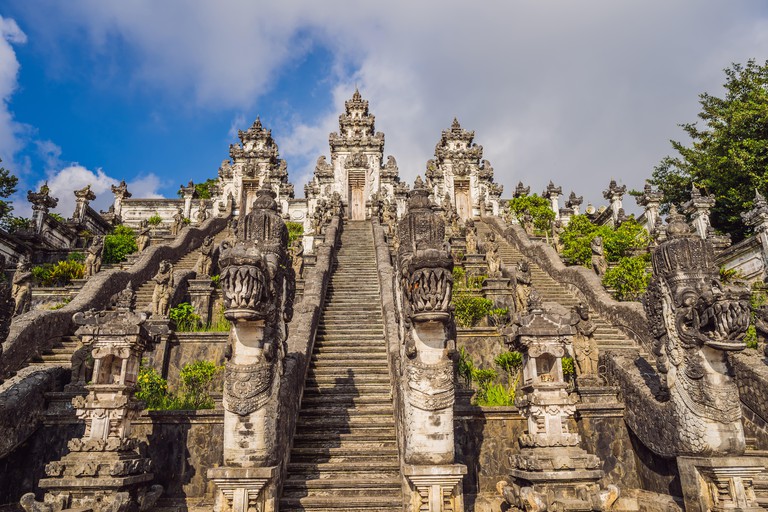 © Elizaveta Galitckaia / Alamy Stock Photo
Lempuyang Luhur Temple is one of the oldest temples in Bali, sitting on the peak of Mount Lempuyang in East Bali. It’s definitely not easy to climb up the 1,700 steps to the temple, but bite your tongue before you moan about it – locals believe that those who complain will never make it to the top. Legend has it that it was built when Mother Earth was only 70 years old, along with a couple of other temples – a project initiated by Lord Pashupati and his children to help stabilize the island’s nature. The temple is especially crowded during Hindu holy days and during the full moon, when devotees embark on a pilgrimage to seek blessings and holy water.

A visit to this striking landmark is included as part of Culture Trip’s immersive small-group Bali tour.
Give us feedback