The Most Beautiful Chinatowns to Visit in Indonesia 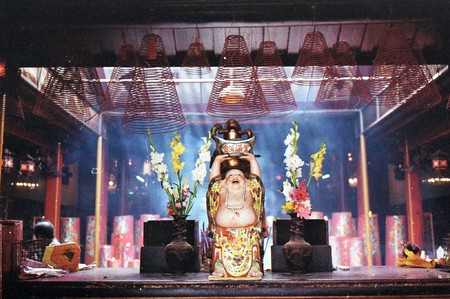 Indonesia’s diversity is not only limited to its own indigenous ethnicities, but extends to influences from other nations. Chinese-Indonesians make up a significant proportion of the archipelago’s inhabitants. In many major cities, Chinese people in Indonesia are crammed together in one neighborhood during the colonial era to facilitate control over the community. Concentrated that way, the culture thrives and often mixes with indigenous customs, creating a distinctive atmosphere with beguiling attractions to explore.

Semarang, Central Java, is a modern city with a charming historical side. As a main seaport town in ancient times, Semarang has a distinctive mixture of cultural influences from Europe, Middle East, also Chinese. After being relocated from different neighborhoods around the major port, the Chinese quickly started over and built new buildings, temples, and cultural artifacts such as statues and oriental ornaments. The area also includes the Semawis Night Market, widely known for its lively culinary scene. Don’t forget to try lumpia, a Chinese fried spring roll that has become Semarang’s popular local snack.

Singkawang in Kalimantan (Borneo) holds one of the biggest Chinese communities in Indonesia, making the Chinatown area the largest and among the liveliest in the country. Chinese customs, architecture, and decorations can be observed in every corner of this town, although some of the cultural aspects have been fused with the culture of Dayak, the main ethnic group of Borneo. Singkawang is also one of the most popular tourist destinations to celebrate Chinese New Year and Cap Go Meh, as that’s when the town is the most festive with big parades, events, shows, and decorations. 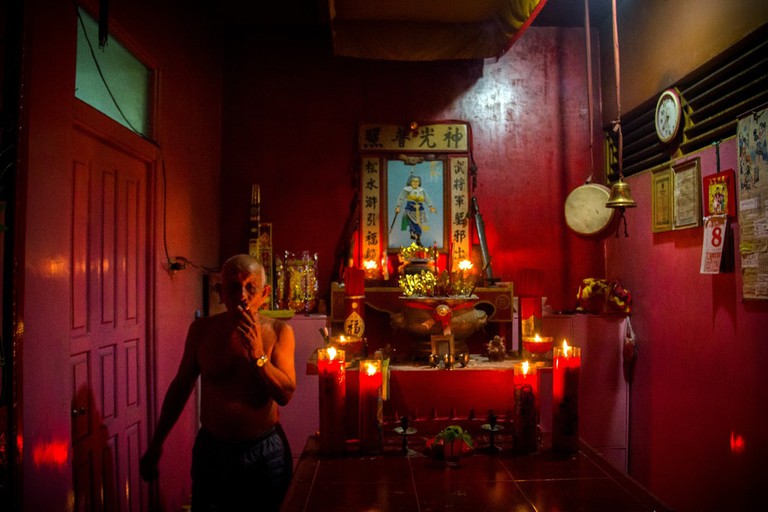 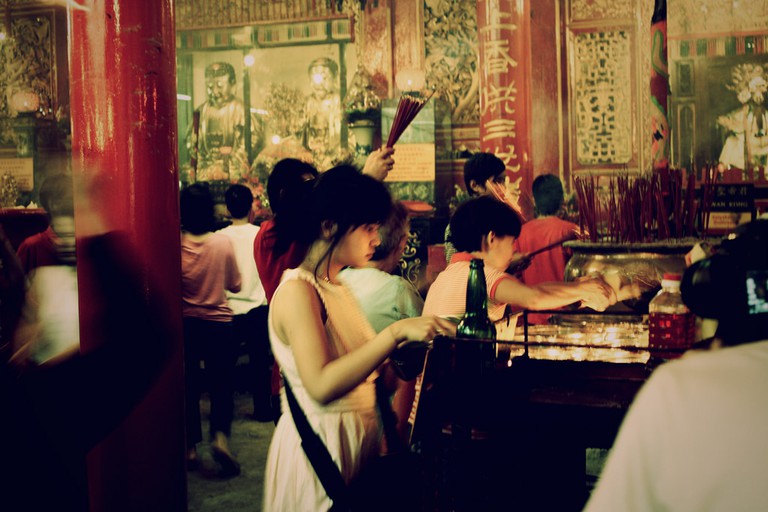 The atmosphere in Glodok | © Sept./Flickr
The Chinese culture and community thrive amid this formerly major seaport town, even after tall offices were erected, mega shopping malls built, and the city considered Indonesia’s metropolitan. The Chinatown is lined with stores selling all kinds of goods from clothes to cheap electronic devices. The Jakarta Chinatown is also an old town with heritage buildings, many of which still operate as legendary stores or food vendors standing since the early 1900s. The neighborhood is also dense with temples and shrines that double as tourists destinations, rich with oriental aesthetics and cultural aspects.
Open In Google Maps
Tamansari, Jakarta, Indonesia
Give us feedback

Bandung’s formerly dingy and sleepy Chinatown has recently undergone a major makeover; revitalized as an authentic but modern tourist attraction with a charming oriental appeal. The Chinatown is now alive all year long, the streets lined with shopping and culinary establishments with a modern feel. Tourists can also visit the Bandung Chinatown Museum that depicts the life of the early generations of Chinese descendants in this town through artifacts, documents, photos, and other vintage items. Bandung Chinatown is also an excellent place for Muslim travelers to eat as much Chinese food as they want without worrying about pork content.

In Sudiroprajan Village in Solo, Central Java, the captivating Chinese culture meets one of the Javanese in symbols, architecture, and customs. More than just a home for the Chinese community, this area is also a testament to Indonesia’s multiculturalism. One of the neighborhood’s highlights is Pasar Gede Solo, which is the biggest traditional market in Solo preserved as a cultural heritage. The old market and the areas around it reflect a unique combination of European architecture, Javanese adornments, and Chinese environment. 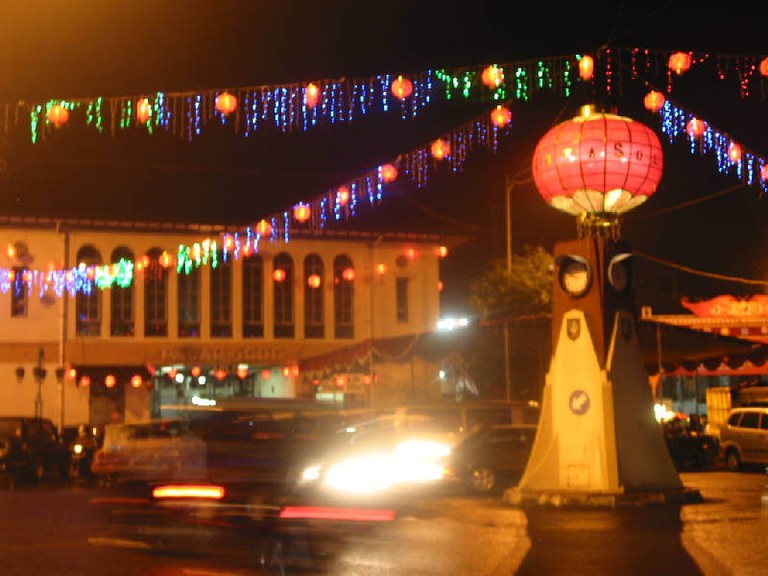 Batam is located in the heart of the ASEAN golden triangle, making it a strategic place for Chinese traders to live and make a living. The Chinese community is concentrated near Nagoya Hill, a vibrant neighborhood bustling with all kinds of trading activities, as well as thriving tourism and culinary experience. Other than heritage buildings and temples, the area has modern tourist destinations such as luxe hotels, mega shopping malls, and more. 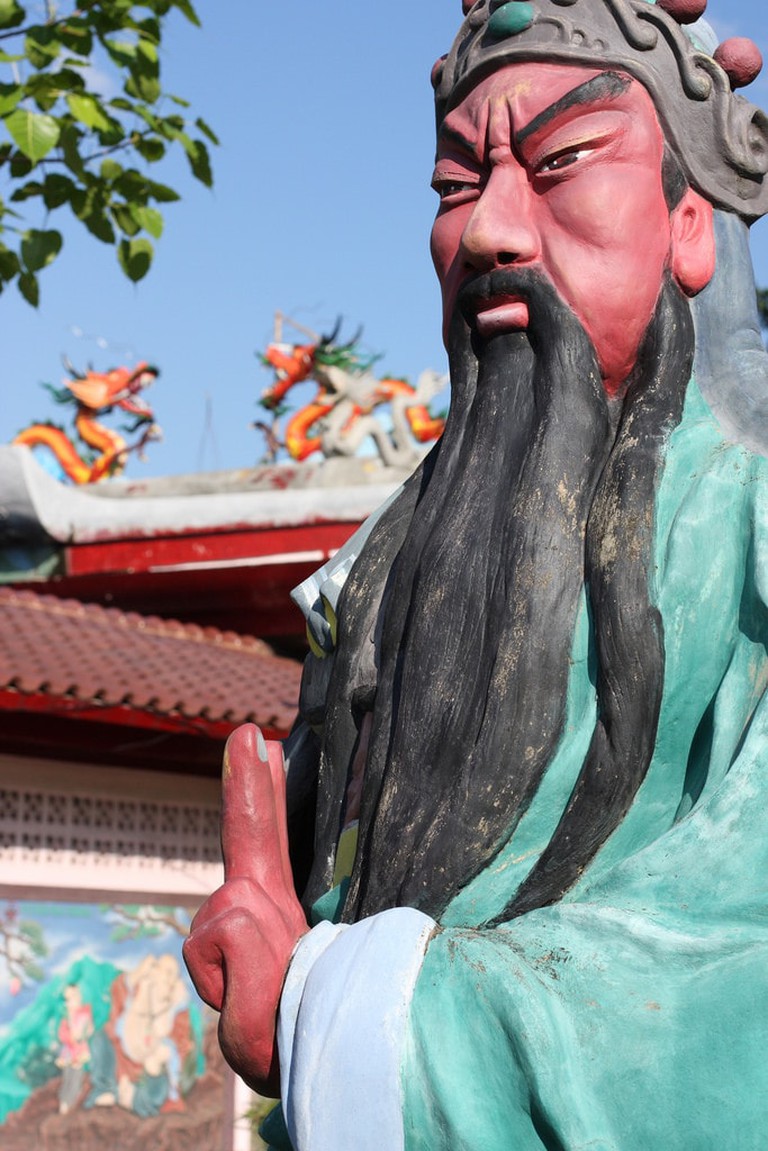 Emerging from a formerly ordinary residential area of Chinese-Indonesians in Medan, North Sumatra, Asia Mega Mas is now a bustling culinary destination. Coming alive during the afternoon until late at night, the restaurants in this area offer exotic Chinese meals that bring animals like snakes, frogs, and lizards to the table. It also has vendors selling Taiwanese or Korean street food with affordable prices. There are also vendors who sell cheap goods, from clothes to home utensils.