The Best Bali Waterfalls to Visit 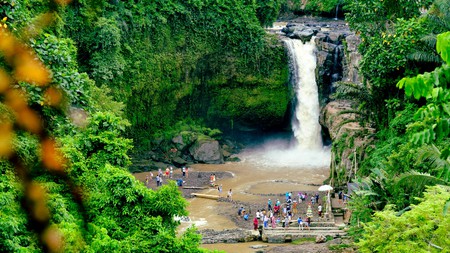 Lace up your hiking boots, the best waterfalls in Bali take a little extra effort to reach. You might take a day trip from Ubud or go full out and journey deep into misty mountains. Either way, the adventure will be worth it.

Explore off-road and you’ll find some of the most spectacular natural wonders in Bali. Its waterfalls, known as air terjun in Indonesian, aren’t always very accessible, but can be reached on foot – so long as you don’t mind trekking through palm-fringed paths and getting a little dirty, you’ll often be rewarded with a cool dip at the end. Pack your rucksack with water and snacks, then head off in search of these top waterfalls.

Want to experience the best of Bali? Book our expansive, specially curated 12-day tour, where you’ll take in the best Balinese natural wonders and even swim in the Banyumala Twin Waterfalls. 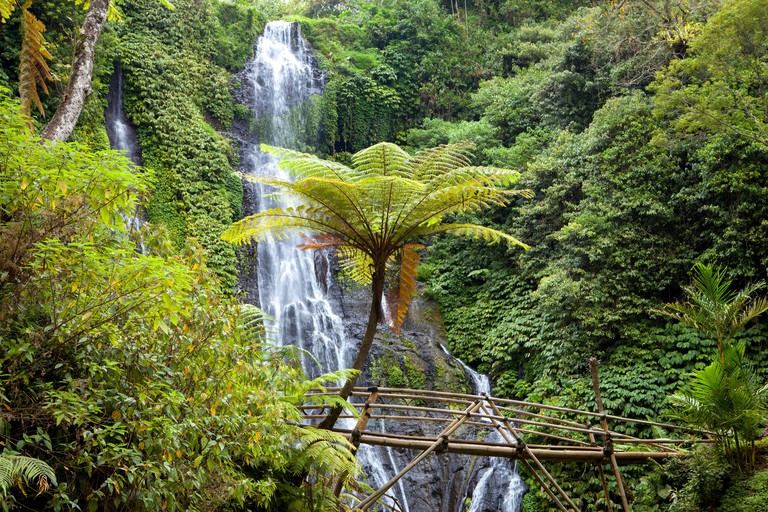 © sculpies / Alamy Stock Photo
Way up in the central mountains of Bali, you’ll find the Munduk Waterfall, hidden deep in the misty jungles of the Buleleng Regency. Here, the temperature is dramatically cooler than on the coast — meaning the water is a little bit chilly. Rest assured, you’ll feel invigorated after a quick swim. Afterwards, explore the clove and coffee plantations that cover the mountainous landscape. It’s well worth the three-hour drive from Denpasar. 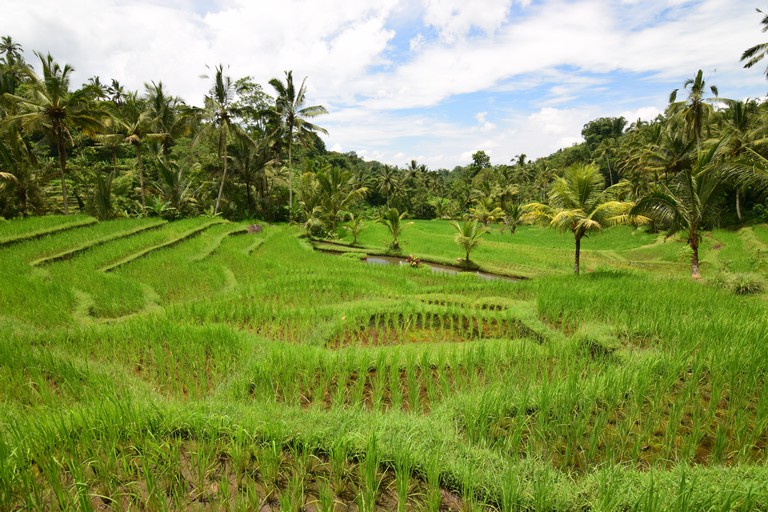 © Curiositas / Alamy Stock Photo
Besikalung Waterfall is more petite than the rest, but it just happens to be minutes from the Jatiluwih Rice Terraces, a multi-tiered stretch of photogenic bright green rice fields. After you’ve snapped enough pictures, head to Pura Luhur Besikalung, a traditional Balinese temple that’s tucked away from the main road. Note: swimming isn’t permitted at this waterfall. 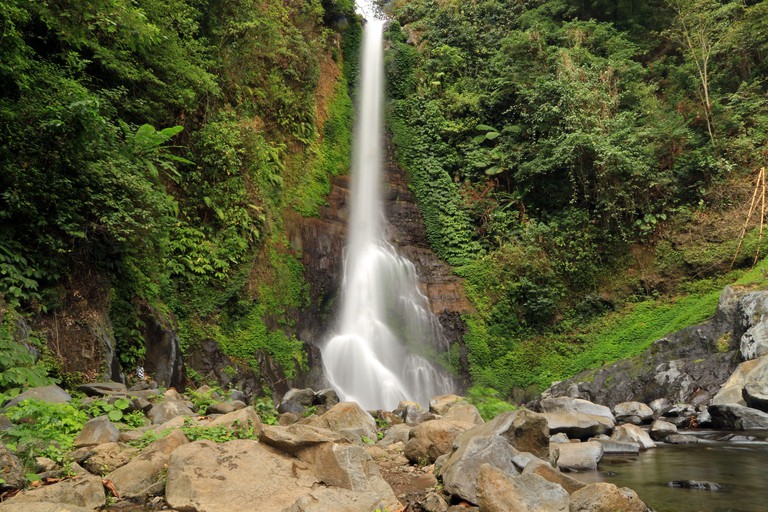 © bayazed / Alamy Stock Photo
Also known as Singaraja Waterfall, Gitgit Waterfall is one of the more heavily touristed waterfalls in Bali — and with good reason. This tall, narrow drop plummets into a deep blue pool below, showering mist on anyone who gets close enough. It’s a one-hour drive from the beach town of Lovina, known for its dolphins, so making an excursion from there is easier than coming from Denpasar. In the same area, you’ll find Gitgit Twin Waterfalls, two smaller falls that converge into one. 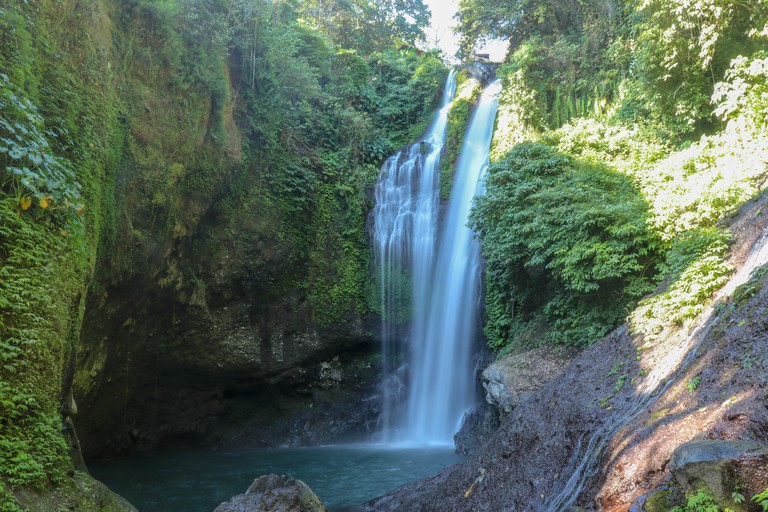 © Karel Bittner / Alamy Stock Photo
Aling-Aling Waterfall is a great spot for adrenaline seekers. Alongside tonnes of canyoning spots around the Aling Gorges, it’s also known for being a cliff jumping spot. Start with a 5m (16ft) leap and build up to a 15m (50ft) dive into the clear waters below if you dare. There’s also a naturally formed rock slide for those who like to stay closer to solid ground. Plan an entire day here as it takes between two and three hours to drive from the greater Denpasar area. 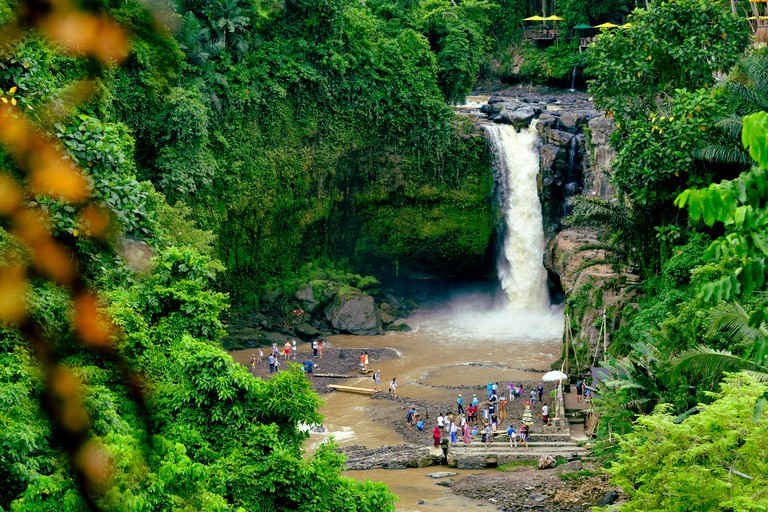 © corleve / Alamy Stock Photo
Just southeast of Ubud lies the Tegenungan Waterfall, catapulting over a rocky cliffside in multiple, powerful streams. Lounge on the black stone rocks, or take a dip in the pool at the base of the falls. It’s a magical sight in the late afternoon sun. Much closer to Denpasar than its far-flung counterparts, this means Tegenungan gets more foot traffic. By the same token, it’s possible to hop to other nearby attractions, including Sumampan Waterfall.

A slate-like wall of black rock makes Lembah Jian Waterfall look like an art installation in the middle of the jungle. The streams of this waterfall are narrow, flanked by rich vegetation covering most of the mountainside. It’s in the village of Tinggarsari in the Buleleng Regency, west of Bali’s twin lakes. It is by far the most isolated waterfall on the list. Alternatively, head to the nearby Blahmantung Waterfall – a slightly more visited, but still hidden, 95m (312ft) high waterfall. 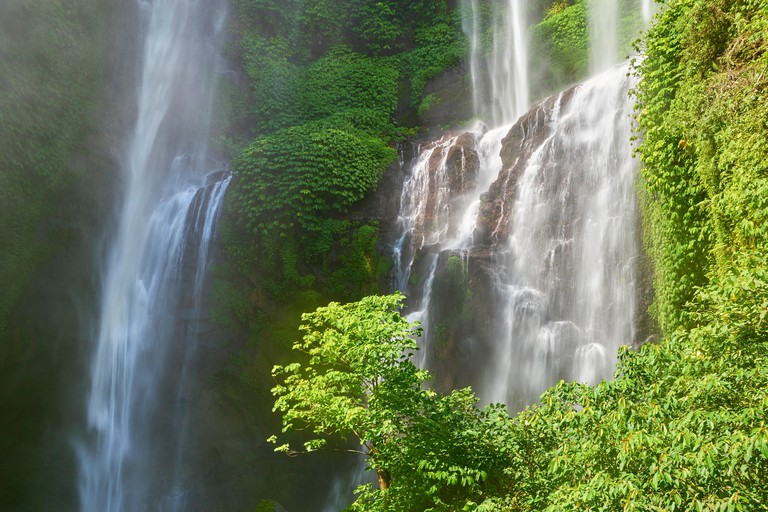 © Jan Wlodarczyk / Alamy Stock Photo
This giant twin waterfall has likely appeared on your Instagram feed at some point. As one of the most coveted spots in Bali, Sekumpul Waterfall is nothing short of spectacular. Here, 79m (260ft) tall streams pour through thick jungle foliage, surrounded by trees and low-hanging vines. Although it’s no secret nowadays, it is a three-hour drive from Denpasar — making it less crowded than closer options. With a steep 30- to 60-minute hike up and downhill, expect a leg workout.

A 15-minute walk through well-kept jungle leads you to Leke Leke Waterfall, a narrow yet long stream surrounded by leafy shade and wildflowers. It’s not much of a swim spot, rather a beautiful place to take in the view. Despite only being an hour’s drive from Denpasar, it feels just as far away as some of the more remote spots on this list. It can get crowded during peak season, but the surrounding gardens are large making it easy to find a peaceful space.