Searching for Waves in Bali With Volcom Surfers 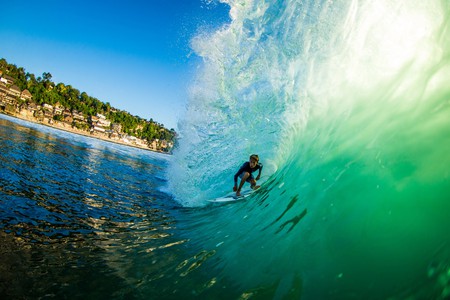 A group of predominantly blonde surfers surround the faint glow of a laptop screen as the sun sets in Bali, Indonesia. The forecasting charts and metrics utilized to find the best waves and swells evoke smiles and words like “gnarly” and “stoked” as the numbers display the possibility of 8-12 foot waves the following day.
Lights are eventually turned off. Bodies slump onto beds as the surfers go to sleep like kids on Christmas Eve, eagerly anticipating what the next morning will bring.

It’s now 6 a.m. Weary-eyed surfers wander around the Volcom House in search of board shorts, surfboards, a cup of coffee, a bowl of instant cereal. The vans are packed to the brim with boards and bodies. It’s quiet for most of the trip as the sun slowly peeks its head out from behind the horizon to signal morning.

Following an hour-long drive from Canggu to Padang Padang Beach, one of Bali’s famous surf spots, the engines are cut. Those on-board disembark and trek through an unruly dirt, gravel and sand path toward the water, while dodging lush foliage and the occasional mosquito or fly.

The excitement from the night before is suddenly quelled as eyes gaze down off the cliff toward the water. The big swell isn’t there. Did it come through overnight? Is it coming later? 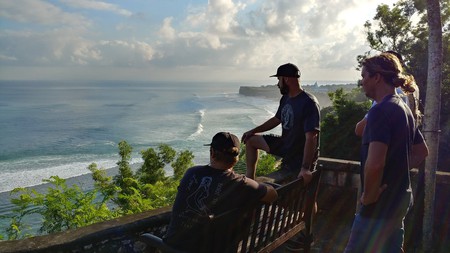 That’s the thing about surfing. No matter how much predicting, planning and research that goes into locating and timing a swell, there is one factor that cannot be controlled: the ocean.

While the waves are still quality, the slightly disappointed group returns to the transport in search of something better, something that had built up in their minds the night before. The caravan begins again, destined for Bingin Beach. The swell isn’t 8-12 feet, but the ocean is seemingly empty.

An executive decision is made to set up camp here and the pre-surf routine begins. Heads and arms slip through rash guards. Wax is methodically applied to boards. Sunscreen is globbed into open hands and lathered onto faces, necks and exposed arms. 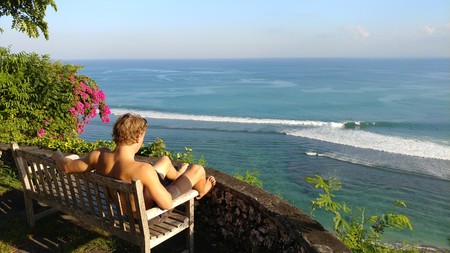 Volcom surfers—ranging in age from 12-year-old groms to seasoned veterans in their 30s—cautiously walk on slick rocks toward the water. They avoid slipping by putting wax on the tops of their feet and rubbing it off with their other foot for better grip.

Surfboards thump into the water as arms feverishly begin paddling to get out to the break before the next set rolls in. Once they get out far enough, the surfers form a line parallel to the beach, bobbing up and down as waves rise and fall on their way into shore. Surfers take turns dropping in on waves, based on certain codes and etiquette—locals get top priority on the best waves.

It’s still early enough that the cliffside warungs remain relatively empty. Those who are present enjoy breakfast and a seemingly private showcase of pro surfers as Volcom riders dominate the current lineup.

A surfer catches a wave—these are short, shallow lefts—completes his ride, then paddles back out for his next turn on the line as others repeat the process before and after him. This routine, that lasts multiple hours, is almost as fluid as the waves themselves. 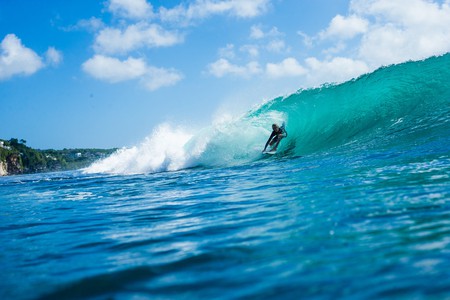 As the day wears on, more and more local and foreign surfers and body boarders tiptoe on the rocks to join in on the fun. How could you not? Volcom riders sporadically begin retreating from the water in favor of nasi goreng and clean bottled water.

It’s time to head back home. The return ride is almost as quiet as the morning’s. Riders are wiped from a hard day’s work in the sea and sun. They arrive at the house before dinnertime and reminisce about the day, share photos and videos on social media and enjoy the Balinese nightlife.

Sitting on Canggu Beach with fine black sand under their feet and a cold Bintang in hand, the surfers stare out toward the ocean as the sun sets wondering what tomorrow will bring.

Travel and accommodation in Bali provided by Volcom.