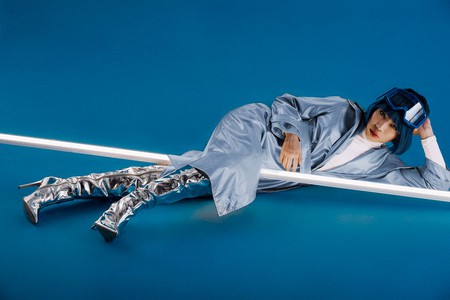 Brash, bold and unapologetic, Ramengvrl is bulldozing Indonesia’s hip-hop scene and challenging the country’s conservatism, writing bars that slap mainstream pop to the back of the charts. Her words send a clear message to all Indonesian women: speak up, loud and proud (and don’t censor yourself in the process). Culture Trip met with Ramengvrl at Jakarta’s WeTheFest.

It’s Saturday afternoon at WeTheFest, the largest contemporary music festival in Indonesia. This place is a kaleidoscope of colours, glitter and sunglasses. Hats, hair and hijabs. A creole of cultures and diversity in the second most populated city in all Southeast Asia.

I ask some participants who they came to see. Lorde, James Bay and Odesza were among the answers – a rare chance to see big Western names so close to home. Yet, as festival organisers are keen to point out, WeTheFest is first and foremost a platform to showcase and celebrate local talent – and the hype for them is no less palpable.

Making a way to the indoor stage called ‘This Stage is Bananas’, I find this indeed to be the case. Seringai, a metal band from Jakarta, is playing to a wild, headbanging crowd. Standing perfectly still among those bobbing heads is Ramengvrl. Rocking blue hair straight from the cover of a 60s issue of Vogue magazine, tinted sunglasses and a t-shirt stating ‘Satan’s School for Girls,’ the artist looks equal parts covergirl and protester. I think to myself: this is a woman who clearly does not care for the status quo. 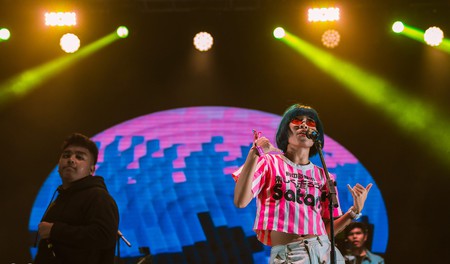 “I just don’t get Instagram shots at Starbucks, selfies with completely unrelated captions and quotes,” Ramengvrl says when asked about her latest single, CA$HMERE. “If I had the money, I’d like to make an impact”. Having recently scooped Best Rap/Hip Hop Performace at Indonesia’s AMI Awards this year, Ramengvrl and her crew are currently in the perfect position to do just that.

Putri Soeharto, born in 1992, became Ramengvrl just a few years ago. Once a keen writer and fashion blogger, she achieved a degree in Media and Communications at the University of Indonesia (one of the best in the country).

Before becoming a rap megastar she hated hip-hop, thinking it an annoying type of musical banter. “I think it was because I didn’t understand what hip-hop is all about”, she admits with zero shame. Then, after discovering the styles of Kanye West, Nicki Minaj, Drake and Tyler the Creator, something suddenly clicked.

“I realised that rap music is not all about AK-47s, drugs, bitches and money,” she continues. “It’s a medium that allows me to express myself”.

With more bars in its music than common pop songs, rap, explains Ramengvrl, is an opportunity to tell stories. In ‘I’m Da Man‘, her first single, she shoots words like bullets, fast and precise, directed to those who judged and underestimated her.

At the beginning of Ramengvrl’s career, she had to cope with being the only female trying to break into a male-dominated rap scene. Consider the additional pressure of that scene being in Indonesia: a country where the stereotypical woman is quiet, submissive and attached to a glamour-glazed lifestyle of expensive shopping trips and Instagram selfies – where image and status are everything.

“When I first started [rapping], I felt intimidated because everybody had a dick,” she states. We’re chatting next to one of the stages. It’s loud and I cannot hear the end of her last sentence. I ask her to repeat.

“…I FELT INTIMIDATED BECAUSE EVERYBODY HAD A DICK!” she shouts. Heard loud and clear.

Now and then during the festival, fans stop and point at her, perhaps wishing to get a picture with their hip-hop idol. Maybe they’re too shy to ask, or intimidated by her ‘Satan’s School for Girls’ t-shirt. 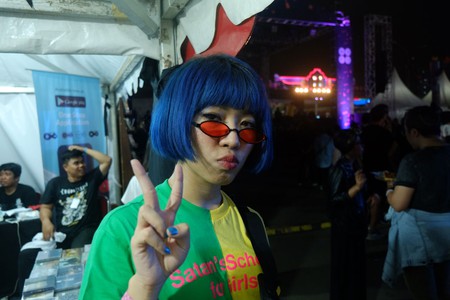 Ramengvrl answers my questions with confidence. She’s the master of her words and aware of her talent. She’s bold, yet humble, admitting she could not have done what she did without her close friends and supporting community. Friends like the collective Underground Bizniz Club for example, who helped her develop her brand and get viral on Instagram and Snapchat. In a country where more than 45 million people hang on the ‘gram, that played a crucial role in her increased profile.

Now that Ramengvrl is also part of Juni Records (a production label with producers including Raisa, and Dipha Barus – the ‘Dr. Dre’ of Indonesia), her visibility is getting higher than ever.

It should come as no surprise that Ramengvrl is using her platform to challenge Indonesia’s conservatism, quick to point out ‘fake people’ who don’t follow through with the lofty ideals they post online.

“Do what the fuck you want to do”, she passionately exclaims. “Say what you want to say. Be who you want to be”. This is her battle cry to all Indonesian women: and that is no small act.

Ramengvrl talks about smoking ‘green’ in a country with capital punishment for drug dealers. Her lyrics drip with sexual references, in a country pushing to make sex before marriage illegal. She spits fire against the image-based selfie culture that has recently taken Asia by storm. Small talk revolts her; social climbers make her sick. 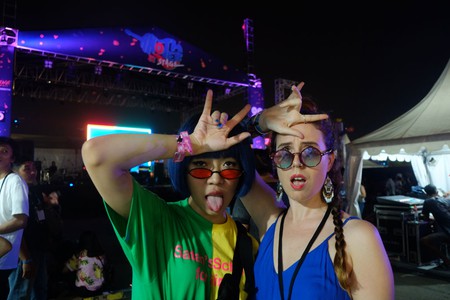 We've both got red sunglasses. It's a sign | © Kintan Ayunda

Her words are like hot bombs, yet bring a breath of fresh air to Indonesian music, especially for women. “[Ramengvrl’s lyrics] are like a breakthrough,” says Rifa, a local girl attending the festival. “Her lyrics encourage Indonesian women to talk bluntly, pushing them to be brave and say the words ‘This is f*****d up!’”

Despite Ramengvrl’s passionate words, I wouldn’t call her an angry rapper – she’s more of an activist. She wants to make women feel comfortable in their own skin, without denying their roots and culture. Everything about Ramengvrl is still distinctly Indonesian – including the use of Bahasa (the national language) and other local references in her music. She represents a wave of counterculture rising in the country. And if this involves ruffling a few feathers in the process, so be it.

“If they don’t understand, I pray to God they get their karma,” as she says in CA$HMERE. I wonder which God she refers to, in this deeply religious land of islands and ancient temples.