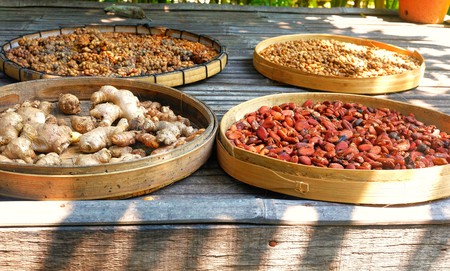 From the culinary treats of Ubud to the high-class resorts of Jimbaran Bay, Bali is a foodie haven which can surprise even veteran travelers. The island’s thriving restaurant scene embodies the best elements of Balinese culture – Indonesian traditions, Western and Australian influences and an endless party atmosphere, whilst using the fruits of this tropical paradise to create unique culinary creations. Here are 10 of the best restaurants you should visit when in town. 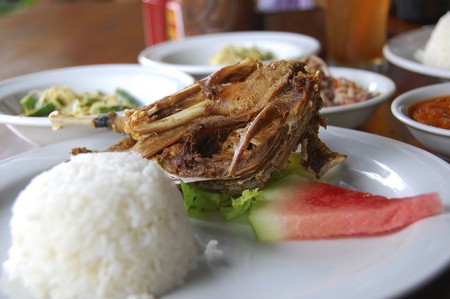 Diner, Restaurant, Indonesian, Asian, $$$
Facebook
Email
Twitter
Pinterest
Copy link
Share
Map View
Since opening its doors in 1990, Bebek Bengil has developed into a Bali institution, and is one of the many distinctive restaurants in the foodie paradise of Ubud. Bebek Bengil translates as the Dirty Duck Diner, a reference to the restaurant’s specialty bebek tutu (smoked duck), as well as to the many ducks which apparently frequented the site before it turned into a restaurant (and who presumably ended up on the table). The smoked duck has to be ordered 24 hours in advance, since it is slowly smoked over the course of a whole day, and the succulent meat and crispy skin is incomparable.
Open In Google Maps
Jalan Hanoman, Bali, 80571, Indonesia
+62361975489
Visit Website
Give us feedback 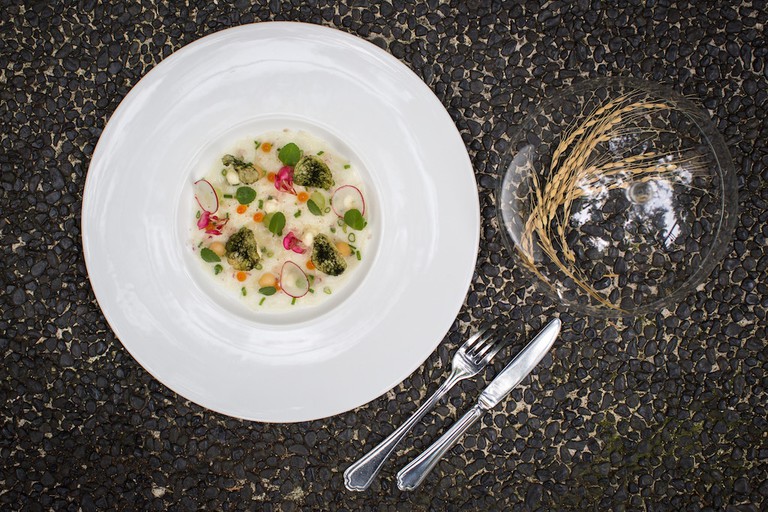 Describing itself as a ‘fresh oasis of ingenuity in the world of gastronomy’ Mozaic Restaurant is a culinary laboratory which explores the potential of Bali’s many lavish ingredients. Run by Chef Chris Salans, the ever changing menu is a testament to his continual search for culinary innovation and perfection, as well as to the restaurant’s dedication to the freshness of ingredients. Mozaic was named the 50th best restaurant in Asia by San Pellegrino, who called it ‘Bali’s finest restaurant… a genuine global gastronomic destination’, and recommended the ‘Javanese quail and foie gras pastille with Balinese rujak sauce, or grilled tiger prawns with pink grapefruit and ginger flower’.

A post shared by MozaicRestaurant Gastronomique (@mozaicrestaurantubud) on Mar 16, 2017 at 9:21pm PDT 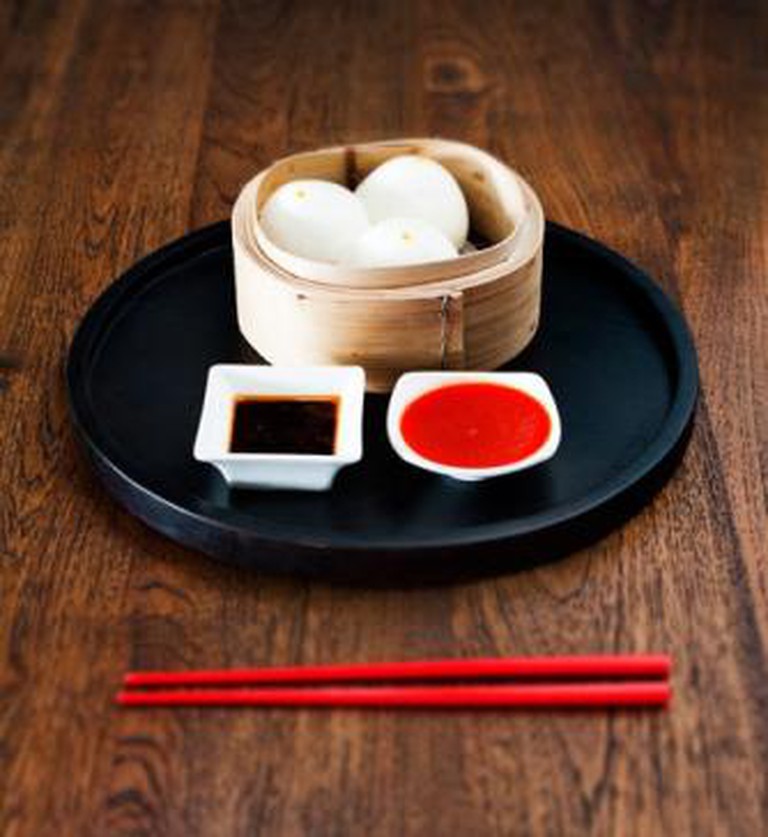 Lamak Restaurant & Bar, Bali | © Mamasan
Lamak is a Balinese term meaning ‘a carefully crafted element of sacred offerings’, which is what Lamak Bali seeks to achieve with its cuisine. The restaurant aims to combine Balinese tradition with culinary innovation, and prides itself on the local touches it adds to both the menu and the interior design of the restaurant such as local wood, stones, and carvings. The food is a mixture of modern Asian and European cuisine, and has merited the award of Indonesia’s Best Restaurant from Tatler twice, in 2005 and 2009. Dishes such as smoked snapper medallions coated with curried yogurt, alongside almond-raisin rice, lentil patties and tomato chutney, epitomize the best of Bali’s thriving food culture.
Open In Google Maps
Jalan Monkey Forest, Bali, 80571, Indonesia
+62361974668
Visit Website
Give us feedback 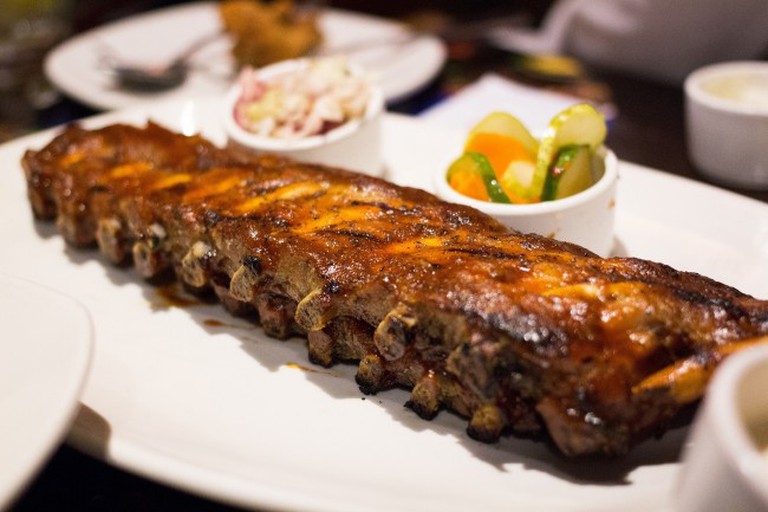 Ribs | © Pixabay
Chef Will Meyrick is a heavyweight on the Bali culinary scene, with the hugely successful Sarong restaurant to his name. With Mamasan he has ventured into new territory, an attempt to ‘open a place that is more than just a restaurant…an environment where people can feel comfortable to eat, try their hands at cooking or just lounge in a bar’. The result is a trendy, restaurant-bar in which patrons are encouraged to make themselves at home. The decor purposefully evokes ‘colonial Britain in Shanghai during the 1920s, with marble top mah-jong tables and over-sized tan leather chesterﬁelds’, whilst the food is a combination of Chinese, Indonesian, Indian, Malay, Singaporean, Thai, Cambodian and Vietnamese dishes. The crispy ‘confit’ pork hock on the bone with nahm jihm jauw & nam pla prik comes highly recommended.
Open In Google Maps
135 Jalan Raya Kerobokan, Bali, 80361, Indonesia
+6281806126700
Visit Website
Give us feedback

Restaurant, BBQ, American, Steakhouse, Indonesian, $$$
Facebook
Email
Twitter
Pinterest
Copy link
Share
Map View
Evoking the best in street food, Naughty Nuri’s is a self-proclaimed ‘funky street side food haven’, which prides itself on being ‘naughty but nice’. Naughty Nuri’s specializes in appealing to the more carnivorous diners, and their many takes on the humble pork rib have become legendary. Their specialties include ‘wicked ribs and brutal martinis’, whilst the pork chops, chorizo sausage, and satays all come highly recommended. As much a party venue as any restaurant in Bali, Naughty Nuri’s promises an unforgettable dining experience.
Open In Google Maps
Bali, 80361, Indonesia
+623618476783
Visit Website
Give us feedback 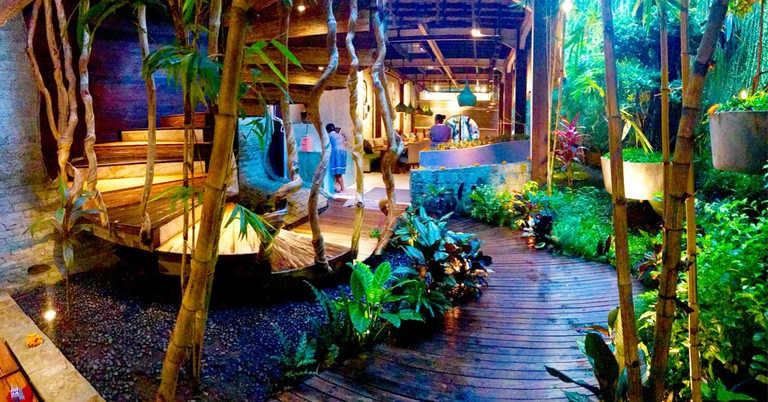 The cozy ambiance at Clear Café, Ubud, Bali | © Clear Café
A focus on local, ethical produce defines Clear Café, and this ethos is evident in everything they do. Their work to promote and foster the produce of local Balinese farmers is laudable, as is their dedication to healthy eating and positive energy – indeed they profess a belief that energy can be transferred through food, and therefore maintain a positive and upbeat atmosphere in the kitchen at all times. However, it is the quality of the food that comes out of that kitchen that really counts, and theirs is second to none. Dishes such as Bali Tataki, a cocoa, cayenne seared tuna with fresh daikon in delicious mangosteen sauce and Ikan Asli fresh coconut crusted snapper burst with freshness and flavor.
Open In Google Maps
8 Jl. Hanoman, Ubud, 80571, Indonesia
+6287862197585
Give us feedback 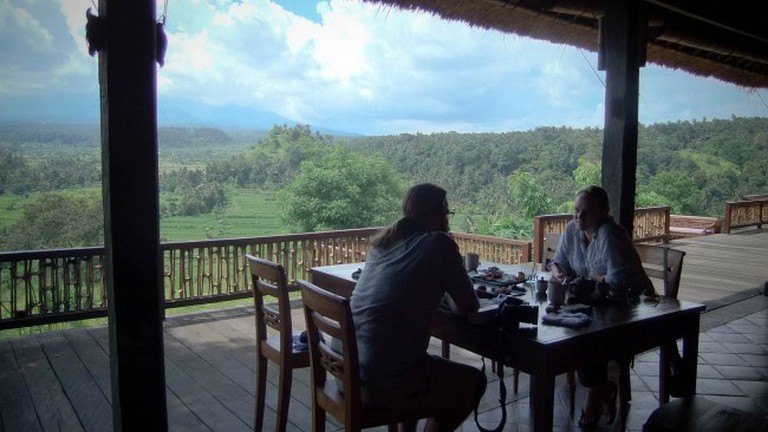 Bali Asli | © Scott Dexter/Flickr
A ‘restaurant, cocktail bar and coffee den’, which encapsulates the laid back lifestyle of Bali, Sea Circus is fast becoming one of the best places to eat, drink or just hang out on the island. The effervescent interiors are matched by a colorful façade which makes Sea Circus impossible to miss, and the meticulous attention to detail is evident in the food as much as in the cutting edge design. Dishes such as pan roasted barramundi with tomato & chili jam, cous cous, fennel & coriander or red quinoa and raisin salad with avocado, grated carrot, cherry tomato, celery & lettuce use the abundant natural produce of Bali to maximum culinary effect.
Open In Google Maps
No.22 Jalan Kayu Aya, Bali, 80361, Indonesia
+62361738667
Visit Website
Give us feedback 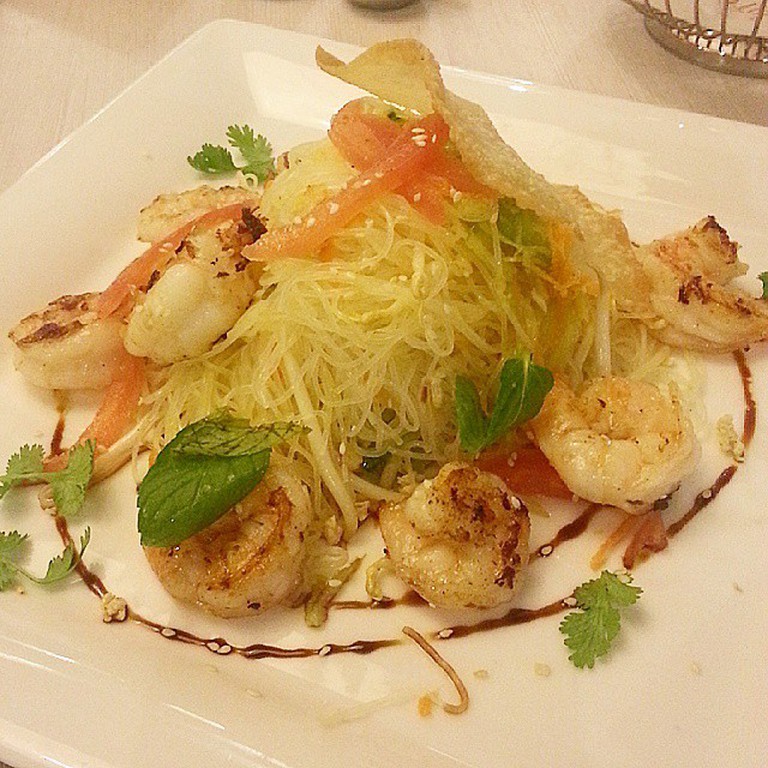 Shrimp and glass noodles | © Debbie Tingzon/Flickr
Claiming to ‘promote Balinese cuisine and culture without exploiting it or its people’, Bali Asli puts ethical considerations into everything they do. Their menu is designed around considerations of provenance, and ‘supporting those who fish, farm and forage in the nearby fields, ocean and jungle’ is central to their gastronomic ideology. This focus on local produce is matched by a commitment to tradition and authenticity, with food that purposefully evokes the traditions of Balinese culture. Alongside the conventional restaurant aspects of Bali Asli, they also offer ‘Experiences’ which allow guests to experience culinary Bali in a range of ways, from cooking schools, to guided food tours.
Open In Google Maps
Jalan Gelumpang, Bali, 80811, Indonesia
+6282236909215
Visit Website
Visit Facebook page
Give us feedback

Apartment, Villa
Facebook
Email
Twitter
Pinterest
Copy link
Share
Map View
Lilin aims to provide a comfortable and intimate dining experience, in which traditional Asian flavors are pared down to their purest and most potent aspects. The tapas style menu brings out the best of Asian culinary traditions and allows guests to sample delights from all over the Asian gastronomic map. The restaurant’s interiors purposefully evoke traditional Indonesian design, whilst giving it a slick, contemporary update. Some of the most intriguing tapas dishes are baby shrimp and glass noodle salad with fresh greens in garlic, chili, and lemon dressing, and roast duck red curry cooked with grapes, pineapple, tomato and fresh Thai basil. Their cocktails are as innovative and delectable as their food.
Open In Google Maps
#77 Jalan Camplung Tanduk, Bali, 80361, Indonesia
Give us feedback 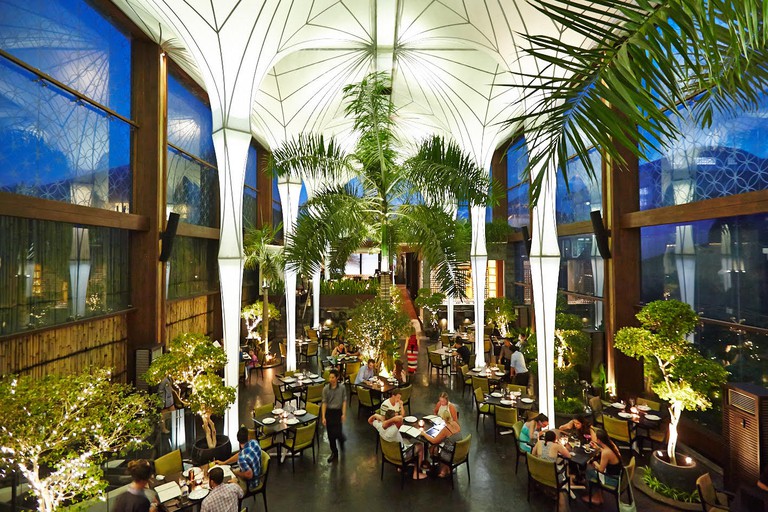 DINNER PLANS • Anyone want to taste some of the best food in Bali at one of the best restaurants in Bali? Well look no further than @merahputihbali You will not regret it! 👌🏼#ourfave #thebaliwhisperer

Michelin-Starred
Give us feedback