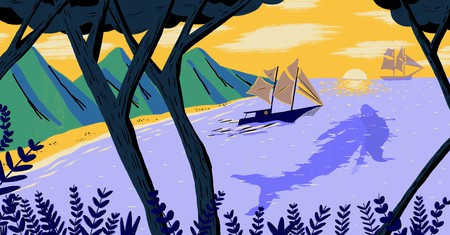 An ancient Javanese kingmaker, ruler of the sea and wife to generations of kings; the tale of Nyai Roro Kidul is full of spiritual romance, political drama and secret intrigue, set against the backdrop of the vast Indonesian sea.

‘The Queen of the Southern Sea’ is probably the single most popular mythical figure in all Java, if not Indonesia. For centuries she has reigned from a seemingly blurry line between myth and reality, inspiring both bedtime stories and academic research.

However, despite thorough studies, eye-witness accounts and numerous tales dedicated to Nyai Roro Kidul, a large portion of her persona remains enticingly mysterious. There’s something scary, venerating, and seductive about this goddess – many Indonesians credit her not only for supernatural powers, but also the rise of empires. Nyai Roro Kidul may (or may not) be mythical, but the fragments or her existence grace the lives of Indonesians in more ways than they realise.

Queen of the Southern Sea

‘Nyai’ is a Javanese honorific for an elderly woman. But do not rush to the image of a crippled old lady with wrinkles – Nyai Roro Kidul is not your typical neighbourhood granny. More often than not, Nyai Roro Kidul is depicted as a beautiful young princess, sometimes with a fish-like lower body similar to that of a mermaid, with dark long hair and beautiful traditional green attire embracing her figure.

Nyai Roro Kidul is said to rule an underwater empire located off the southern coast of Java, a certain portion of the Indian Ocean (hence the moniker, ‘Queen of the Southern Sea’). Legend has it that she likes to keep a company of handsome young fishermen, whom she lured into the sea with her supernatural powers and physical beauty.

Nyai Roro Kidul is known by different names throughout Java. Another mythical figure, Nyi Blorong, is often regarded as the goddess herself in mermaid form, acting as the commander of the Southern Sea. Gusti Kanjeng Ratu Kidul and Kanjeng Ratu Ayu Kencono Sari, all decorated with honorifics and adulation names, are also understood to refer to the same figure.

The tale of Nyai Roro Kidul is associated with a lot of earlier folklore, but the earliest definitive account of the deity comes in the 16th century Javanese chronicle Babad Tanah Jawi. The record tells of her encounter with a young man named Panembahan Senopati, who later became the founder and ruler of the great Mataram Kingdom – courtesy of the goddess’s blessings and providence.

For that great favour, Nyai Roro Kidul in turn asked to be held in marriage – not only by the prince himself, but by all of his successors. The Mataram Kingdom later broke into two, the Surakarta and Yogyakarta Sultanate, but Nyai Roro Kidul’s place as a spiritual consort for the kings of both sultanates has stayed very much the same centuries later.

As the spiritual first lady, Nyai is still expected to grace her presence on special occasions, facilitated by real artifacts and rituals of worship. The Sultanate keeps a royal chariot for Nyai Roro Kidul, an elegant carriage kept in museums when not in use.

It’s widely believed that the rulers of Java still actively seek counsel from Nyai Roro Kidul through asceticism and pilgrimage. However, her spousal role began to decrease in narratives of recent years. A representative for the Surakarta Sultanate reveals that starting from Sultan Pakubuwono X (1866-1939), the Sultans were no longer regarded as husbands by the Queen, but rather beloved sons. However, often in important court ceremonies, a special seat next to the Sultan is still purposely left empty – reserved for the Queen of the Southern Sea.

Of all the things that keep Nyai Roro Kidul alive, one of the most intriguing aspects is the vast number of places in Indonesia associated with her. These places represent a physical manifestation of the mythical energy that surrounds even the mere mention of her name.

All the southern coasts of Java are generally considered territory of the Queen. Bountiful harvests, violent waves or even tsunamis – all are in her power to impart. Different sections of the 800km-long coastline have different rituals that attempt to please Nyai Roro Kidul, most of which revolve around giving various offerings in symbol-rich ceremonies.

Pelabuhan Ratu (meaning ‘the Queen’s Port’), is a coastal town in West Java with special reverence for the mythical figure. The local fishermen observe an annual holiday for Nyai Roro Kidul every April 6, where they throw offerings to the sea to please the goddess and pray for protection and better yields. Now, the date is commemorated nationwide as National Fishermen’s Day.

Open In Google Maps
West Java, Indonesia
Give us feedback

Hotel rooms for the Mermaid Queen

Several hotels on the southern coast of Java and Bali reserve a special suite for the Queen, lavishly decorated in green (which is believed to be her favourite colour). Some hotels provide daily offerings. Perhaps the most noteworthy of these is Room 308 of Samudra Beach Hotel in West Java. It is said that Indonesia’s first president Soekarno initiated the development of this hotel and its dedication for Nyai Roro Kidul. Due to his Javanese heritage, Soekarno is no stranger to tales of the her powers, and his initiative has led many to believe that he, too, had a special spiritual relationship with the Nyai. 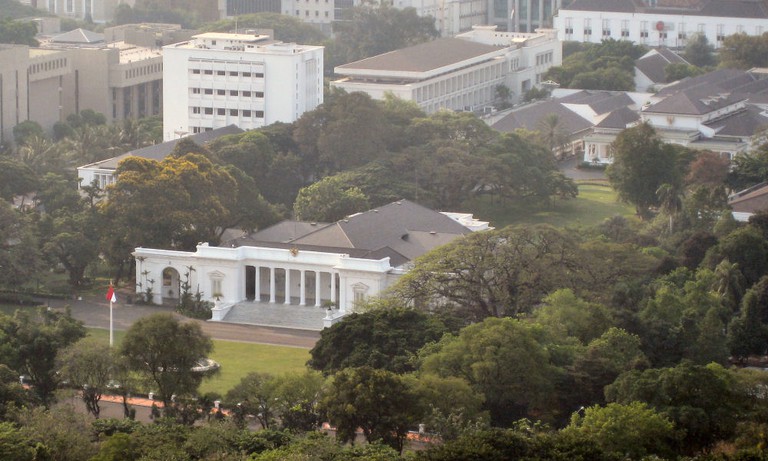 The beauty and mystique that surround Nyai Roro Kidul have inspired many of the nation’s most prominent artists. One painting of her, brushed by none other than the legendary Basoeki Abdullah, sits right inside the presidential palace in Jakarta. The painting shows a portrait of a young looking, beautiful woman with waves crashing in the background. More than just a beautiful work of art, beneath the impressive strokes are stories about the painter’s own encounters with his mythical model. Abdullah revealed that he met Nyai Roro Kidul several times, most notably when he was meditating on Parangtritis (a beach on the southern coast of Yogyakarta) and in a hotel in Pelabuhan Ratu where they conversed for a while. This painting was bought by president Soekarno and remains in the palace’s treasured collection. A replica is also displayed at Samudra Beach Hotel, inside the Queen’s suite in Room 308.

Considering the myths and legends, Nyai Roro Kidul is the proverbial great woman behind not one, but many powerful, successful men. There are people in Indonesia who wholeheartedly believe in her ability to bestow power and riches, and there are those who take advantage of it – claiming they own special possessions to make contact with Nyai.

Interested parties can easily acquire one of the sacred stones or artifacts that carry a promise of blessings from Nyai herself. Others may attempt contact with her, with or without the help of local shamans, praying for blessings from the Queen of the Southern Sea.