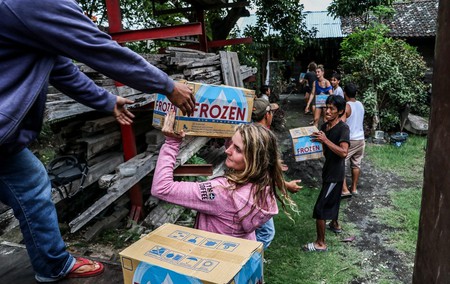 Throughout August 2018, Lombok, Indonesia was rattled by a series of high-magnitude earthquakes, dismantling the lives of hundreds of thousands of people. One of the affected communities, the small island of Gili Trawangan, has been working round-the-clock to aid disaster relief, rebuild and reopen tourism by September – a critical part of the economy for the entire region.

Gili Trawangan (affectionately known as Gili T), is a small, idyllic island sat between the tourism powerhouses of Bali and Lombok.

The beachy scuba diving hotspot, where tourism is a cornerstone of local livelihoods, was just one of the many communities almost completely destroyed by the series of earthquakes sweeping through Lombok throughout August. Despite catastrophic loss, the community has banded together to rebuild paradise. 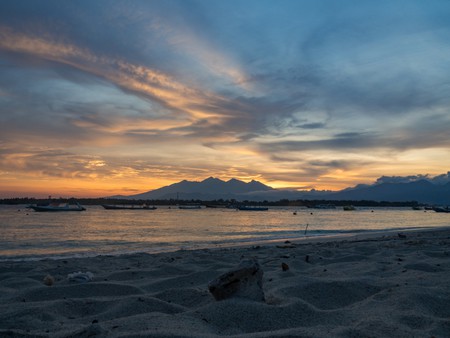 The earthquake that shook paradise

The people of Gili Trawangan maintain fierce pride in their island’s integrity, and staunchly preserves the pristine natural beauty travelers seek. Construction is prohibited across the island’s seven-kilometer white sand perimeter. No building stood taller than the iconic mosque, which sounds the Muslim call to prayer five times daily – engendering a dramatic juxtaposition between the island’s lighthearted medley of beach bum vibes and a deeply revered indigenous culture.

It was on 6 August, after the mosque’s evening toll ushered in Gili’s famous sunset, serenading sun-kissed beach-goers sauntering back to their villas and welcoming the afternoon dive boats cascading ashore, that a 6.9 magnitude aftershock rattled the archipelago. The mosque itself was one of many buildings almost entirely leveled. 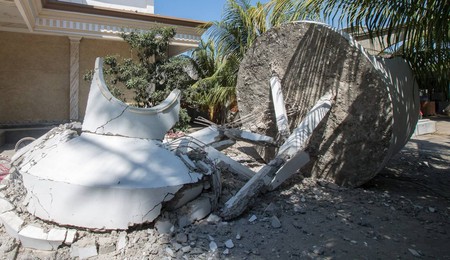 Fearful uncertainty immediately kicked in as community members wrestled between the possibilities additional aftershocks or worse – a tsunami. The general mood was reportedly tense and focused, the eerie quiet of mellow waves lapping the shore were interrupted only by the chants and prayers of locals which, according to one resident, “contributed to the sense that something truly awful had just happened.”

“Indonesia is one of the world’s most active seismic zones,” said Michael Hamburger, a professor of geological sciences at Indiana University. “What is somewhat unusual about this event is that it occurred at relatively shallow depth in close proximity to a populated area. This is the primary reason is was so destructive.”

The quake that roared through Gili T’s terrain was an aftershock of the 7.0 magnitude earthquake hitting Northern Lombok the day prior. In total, the quakes have claimed the lives of an estimated 460 people and displaced thousands of others. Aerial footage of Northern Lombok shows nearly 75% of communities were destroyed.

“I’d never experienced anything like it,” said Ash Embi, a dive instructor who is one of hundreds of the island’s residents evacuated to nearby Bali, where they are coordinating relief efforts. A small team of 40 to 50 people chose to stay behind on Gili Trawangan to ensure rebuilding began right away, in joint efforts to welcome back tourists that the region so desperately needs to sustain its economy. 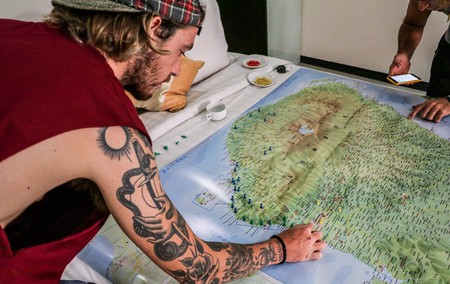 Locals of Gili Trawangan have been evacuated to Bali, where they are organizing relief efforts across Northern Lombok | © Ash Embi | @djash_e / @trawangandive

“[They’ve] lost everything,” said Embi. “These [Lombok] communities are vastly supported by the tourism industry from the Gili Islands and without that, they cannot support their families. Many of our local staff are desperate to get back to work and do what they can to help, so we really want to get the island ready for tourism as soon as possible.”

Embi explained that money has been pouring in from all over the world to help support these efforts, which has enabled more local people to return home to the island and contribute to its revival. Some restaurants and shops are already open, and the island plans to welcome tourists back on 1 September.

“We are very positive about getting things back up and running really quickly,” he added. 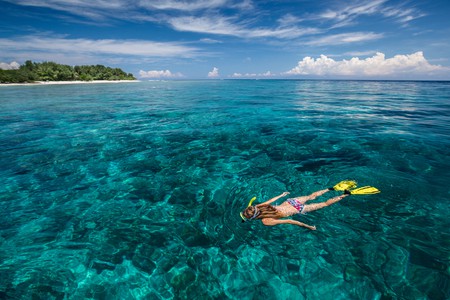 Optimism in the face of destruction

Amid the immediate confusion and fear, locals and travelers alike equipped with military or medical backgrounds (and some with training in emergency management), rapidly organized camps and clinics along the beach. Meanwhile, dive shop staff grabbed first aid kits and emergency oxygen, instructors tended to injuries, and others began to comb the island’s interior to search for more medicine, supplies, and survivors. 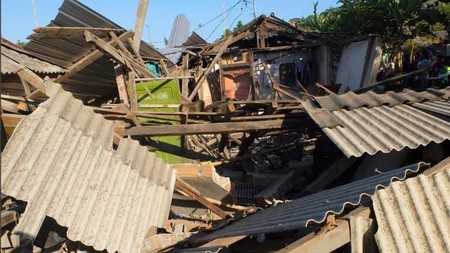 “It was then, trying to navigate the usually so familiar back alleys, that the scale of destruction really became clear to me,” said one resident. | © Ash Embi | @djash_e / @trawangandive

“It was then, trying to navigate the usually so familiar back alleys, that the scale of destruction really became clear to me,” said Lisa Miczaika, a tech diver and dive master candidate at Blue Marlin Dive Center. “What really struck me was the stark contrast of the misery on the shore and the natural beauty of the night. The moon was tinged red, the sky was perfectly clear and the Milky Way visible. The waves were slightly luminescent with glowing plankton and yet just a few meters away on the shore, a team was providing CPR to a man with internal injuries, who unfortunately could not be saved.”

The most prominent feature of their stories, however, isn’t the physical destruction or loss, but the optimism and pride entrenched in this diverse community of expats and locals. Muhamed Saleh, was one of thousands from Lombok who lost his home during the first quake, described how games have been organized to provide trauma relief, workshops assembled to deliver information and education, and musicians line the streets to buoy the positive atmosphere and collect spare change to buy rice and medicine. He said his mother has worked for days straight cooking rice from a makeshift tent, and that his local running buddies have grouped together to deliver food and supplies to more remote areas. 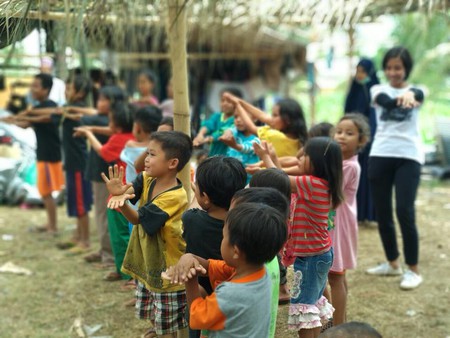 Optimism trumps despair across the spirited Lombok community, banding together to organize games and activities for trauma relief | © Sam Mcleod

The resounding concern among the whole community, however, is the potential spread of misinformation or a lasting stigma of unsafety in the area. Gili T, just like the majority of Lombok, relies heavily on the tourism industry to sustain the livelihoods of its populations.

Experts agree that the sensationalism of such events can be damaging. Peggy Hellweg, a professor from the University of California Berkeley Seismological Laboratory, said that elements like the 24-hour news cycle and an ever-increasing population contribute to our awareness and the impact of such events, which can perpetuate an unwarranted fear.

“Indonesia, California, Japan, Nepal, Italy, the West Coast of South America, Alaska, New Zealand… are all earthquake country,” she said. “It is a good thing, and a bad thing, that earthquakes are relatively rare. The likelihood of someone being hurt by an earthquake, even someone living in earthquake country, is small compared to other hazards like being hit by a car while crossing the road or having an accident while skiing.” 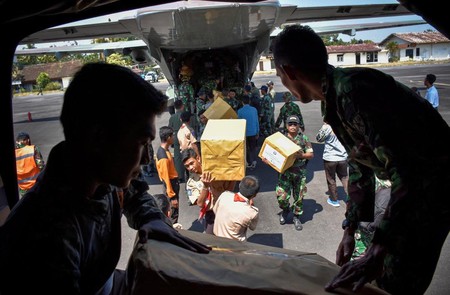 Response has been swift from government agencies and independent parties alike, aided by funds pouring in from all over the world. Donations are still critically needed, which are sourced largely by dozens of GoFundMe pages and local organizations like the Pituq Community Foundation (pituqcofoundation@gmail.com) | © Kevin Gacad

Hellweg said that compared to the 2004 earthquake in Sumatra, the recent events have been relatively small. But it’s this very level of infrequency that can actually lead to greater devastation. She recalled the great Sumatra quake, after which many people were killed by the subsequent tsunami. On one small island in the Andaman Sea, however, an entire population survived.

“They had an oral tradition that if the ground shook, everyone should run to the highest point on the island,” Hellweg said. “There had been no great quakes in the area for several hundreds of years, but when the ground shook the people followed their oral tradition and survived. In other cases, people had forgotten about the quakes that took place several hundred years before and [the lessons learned.]”

The lesson is not lost in Lombok. According to those coordinating the relief effort, a significant portion of funds raised are going directly toward developing sustainable education programs to better prepare the region and its tourists moving forward.

“The people [here] are so beautiful and kind,” said Emily Phillips, an Australian tourist who was visiting Gili T when the earthquake hit. “It is a small slice of paradise with such a diverse ecosystem that everyone should see for themselves.” 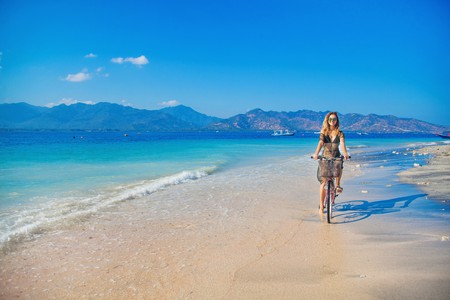 The Gili Islands, between Bali and Lombok, are known for their laid-back beachy vibe | © Mila Supinskaya Glashchenko / Shutterstock

“I love everything about Lombok and the Gilis”

Saleh wholeheartedly agrees that if anything, the spirit of the Lombok community in the wake of such an event should only encourage more people to come experience the beauty of his home and spirit of his people.

“I love everything about Lombok and the Gilis,” he said. “Everyone always just wants to stay. You can find almost anything you could want out of a holiday, from the views of Mount Rinjani in Lombok or Mount Agung in Bali, crystal clear waters full of turtles, the most welcoming atmosphere and of course, always a good party.”