How to Spend 24 Hours in Semarang, Indonesia 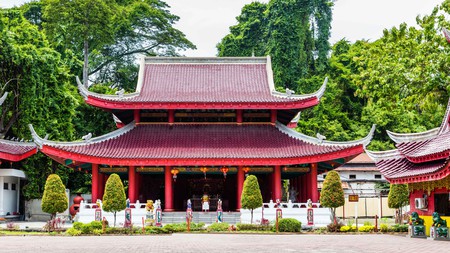 Until recently, Semarang’s old town was run-down and rarely visited. Now, it’s become the city’s hub, and many of its historic Dutch buildings have been restored to their former glory. Here’s how to spend a day in Semarang, the capital of Central Java.

Wander down the wide avenues of central Semarang today and you’ll pass 18th-, 19th- and 20th-century European-style buildings. These were built during Semarang’s long colonial rule by the Dutch, when it was a major port and trading centre. In fact, the old town, or Kota Lama, is often referred to as Little Netherland. After Indonesian independence in 1945, the centre was neglected, and up until as recently as 20 years ago, it was little used by locals. But a concerted effort to revamp the centre has brought new life to its elegant Dutch structures, and the city’s core is once again the focus of activity. 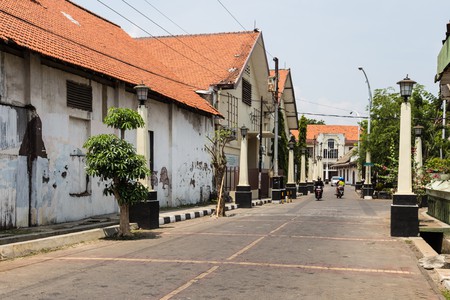 Outside the old town, while the occasional Dutch structure remains, the influences of Javanese culture and the city’s historically large Chinese population can be seen in the architecture. In Lower Semarang, traditionally inhabited by the city’s poorer population, narrow streets run between single-storey houses. Here, there are also signs of Semarang’s bustling trade and service sectors thanks to offices, industrial estates and shopping malls. In Upper Semarang, traditionally inhabited by the wealthy, larger houses look out over gardens, some of which back onto the sea. If you only have 24 hours to spend in Semarang, here’s how to make the most of them.

Start the day with breakfast at Spiegel Bar & Bistro

Situated in the centre of Semarang’s old town, Spiegel Bar & Bistro is ideally located to start a day’s sightseeing in Semarang. With its high ceilings, exposed brick, industrial-style lights and elegant bar, it’s also a stylish place for a bite to eat. The interior decoration points to the 19th-century building’s Dutch heritage – a mezzanine level is held up by the green-and-gold-painted lamp posts that you’ll see lining streets across town. The all-day breakfasts here include potato rosti with eggs and salmon, an egg burrito and The Big Breakfast (eggs, bacon, potatoes, baked beans, tomatoes and sautéed mushrooms). They also serve an array of artisanal coffees and juices.

Head to the Protestant church before checking out vintage wares

From Spiegel Bar and Bistro, walk towards Semarang’s central garden, Taman Srigunting – you’ll be able to see it from outside the restaurant. Walk through the gardens – which are usually packed with people chatting on benches, ambling between its flower beds or FaceTiming (there’s free wifi) – to the church at their northern end.

The domed Blenduk Church dates back to 1753, making it the oldest Protestant church in Central Java. Indonesia counts six official religions, and countless more indigenous religions. While almost 90 percent of the population is Muslim, Protestantism is the country’s second-largest religion. Before entering, take in the octagonal copper dome and the two clock towers that top the white-painted exterior, then head inside to admire the splendid baroque organ and a graceful, floating pulpit. 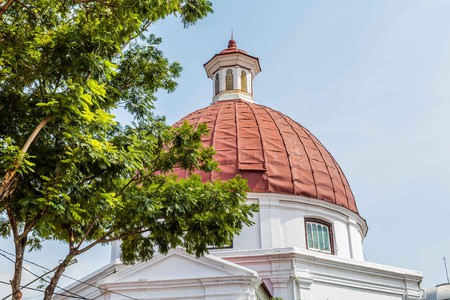 Indonesia is famous for its batik print, a traditional cloth-dyeing technique. The batik industry was at its peak from the late 1800s to early 1900s, but declined during the Japanese Occupation (1942–1945) and further during independence, due to the influx of Western clothing. Happily, ever since the government made an effort to encourage the art in 2000, it has experienced a revival, with people across the country wearing batik print on a regular basis. In 2009, batik was inscribed on UNESCO’s Intangible Cultural Heritage of Humanity list. Look out for the varied patterns during your Indonesia travels, most of which are particular to different regions.

Many batik artists live and work in Kampung Batik Gedong, a batik shopping area in Bojong Village. The winding streets, many of which are painted with colourful murals, house a number of batik shops and workshops. Not sure where to begin? Start with Eko Hariyanto – Mr Eko and his wife have won multiple awards for their work. If you’re lucky, you might have the chance to see Mrs Eko making batik in the traditional way, with a canting (batik tool) dipped into melted wax. Nearby, and with a greater range of batik clothing for sale is Omah Batik Ngesti Pandowo.

Enjoy lunch a little outside of the old town at Pesta Keboen Restoran. It’s an hour’s walk, but you can take bus R11E three stops from Johar (on the roundabout near Kampung Batik) to Jalan Imam Bonjol 8, then cross back to Jalan Pemuda road to take the C6 12 stops to Jalan Kyai Saleh, a five-minute walk from the restaurant. Alternatively, you may wish to take a taxi, which will take about 15 minutes, depending on the traffic. The interior is playfully decorated with antique children’s toys, but try to get a table in the delightful courtyard, which offers plenty of shaded space to sit outside, unlike many of the dining options closer to the centre of the city. Filled with greenery, flowers cascade down from the roof and potted plants surround the tables.

It’s a lovely environment to spend a lazy, long lunch, with nasi goreng (fried rice) and other Indonesia rice dishes on the menu, as well as a range of refreshing soft drinks.

A half-hour walk or short drive from lunch takes you to the Confucius Sam Poo Kong Temple. The temple is dedicated to the 14th-century Chinese Admiral Zeng-He, who is considered to have been the greatest Chinese explorer in history. Zeng-He stopped at Semarang on one of his seven discovery voyages from China when a subordinate fell sick. During his time there, Zeng-He prayed in the area, and later established a temple.

The temple is now dedicated to him, and its walls feature plaques attributing many great deeds to the general, including “To help Java appease the civil war”, referring to the Paregreg Civil War between the east and west kings of Java; “To exterminate the pirate Chen Zhu Yi”, at the time one of the most feared pirates in Southeast Asia; and “To quell the rebellion of Su Gan La / Iskandar”, when Zeng-He and his forces are thought to have come to the aid of a civil war in Northern Sumatra. As Desi, a temple guide told me, “Zeng He is seen as a man of peace – not only a general but a peacemaker.” While in truth, Zeng-He’s efforts were largely to support the Ming Dynasty’s plans for Southeast Asia, he is still considered a hero in parts of Indonesia.

Sam Poo Kong is particularly interesting due to the fact that Muslims, Hindus and Buddhists all pray alongside each other at its four vermillion-painted, lantern-lined temples. Desi explains, “Every religion can come here.” 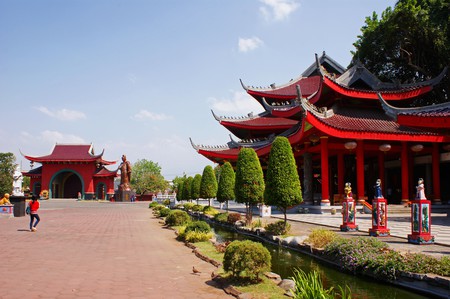 Walk half an hour northeast from the temple to Lawang Sewu, for a spooky afternoon

Described by Semarang local Musa as “the former most-haunted building” in Semarang, Lawang Sewu was completed in 1919 and originally housed the Nederlandsch-Indische Spoorweg Maatschappij (the Dutch East Indies’s first railway company). During World War II, it was taken over by the Japanese, who used it to hold prisoners of war, and after independence, it became the military office of Indonesia. It was abandoned in 1993, and fell into disrepair until its restoration in 2010–2016.

Dutch ghosts are said to haunt Lawang Sewu, including a Dutch woman thought to have committed suicide in the building, and there are stories of Indonesian visitors speaking Dutch, apparently under the influence of the ghouls. Indeed, a horror film was shot here in 2007, entitled Lawang Sewu: Dendam Kuntilanak (Lawang Sewu: Kuntilanak’s Vengeance) – the word kuntilanak comes from Indonesian mythology and describes a female vampiric ghost.

However, the Indonesian government has made an effort to rebrand the building into a cultural and historical site, and it’s no longer said to be haunted. As Musa told me, “In Java, we have various rituals to make ghosts go away.”

It’s still a spooky visit, though. Pay the entrance fee to look around, and head up to the huge loft storage space, where bats roost, passing the seemingly endless corridors of identical doors along the way – there are 928 doors in total, the reason behind the building’s name, which means “Thousand Doors”.

Hop in a taxi for the short ride to Koenokoeni Cafe Gallery for dinner. Housed in a traditional Indonesian house, with its peaked triangular roof, the Indonesian restaurant serves a delicious chicken sate with lontong (Indonesian rice cakes) that arrives at the table still cooking on coals, as well as marinated, grilled barracuda and mangut pari (braised stingray in spicy coconut milk). Order an Indonesia-style soft drink, such as the es campur ketan hitam, which arrives in a large, bowl-sized glass and contains coconut, jackfruit, red tapioca pearls and black rice pudding. They’re so filling that you won’t need dessert.

If you happen to be in Semarang at the weekend, head back into town from Lawang Sewu for a stroll through Pasar Semawis (Friday–Sunday). The busy night market is filled with street-food stalls selling a range of meals and snacks from across Indonesia and other parts of Asia. Look out for babi saté (pork saté), grilled meats, Chinese-style noodles and fresh fruit. Tables are at a premium, but even if you don’t manage to nab one, bask in the busy, noisy atmosphere.

It’s not too far from Spiegel Bar and Bistro, so you could swing back to the day’s starting point for a nightcap to end the evening in style (bars serving alcohol aren’t common in Java). Spiegel can be lively at night, when there’s often a live DJ to accompany the excellent selection of cocktails. 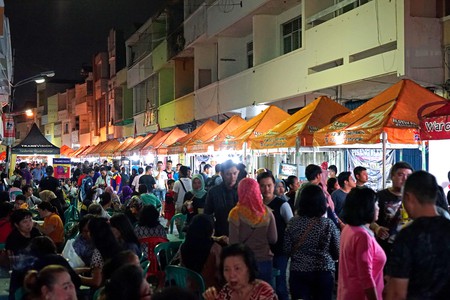