How to Navigate Transport in Jakarta, Indonesia 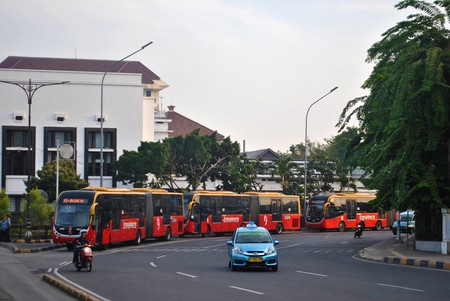 Getting around a crowded metropolitan city like Jakarta can be tricky. With many options and routes to choose from, there are also factors such as traffic jams, commuting crowds, and messy schedules to consider. Read more to discover how to navigate transport in Jakarta, Indonesia.

The TransJakarta line runs through most of the city with integrated routes that will take you virtually anywhere in just one trip. For hustlers in Jakarta, this rapid bus transit system is a very appreciable alternative for transportation because it has a dedicated line that will take passengers past the crazy traffic jams during rush hours. The system also includes some ‘feeder’ routes that will take passengers from beyond the corridors to the nearest shelter. Passengers may have to make transits to switch corridors, so make sure you study your route beforehand and make the right stops.

Local tip: You have to use prepaid cards issued by Indonesian banks (such as Flazz BCA, e-money Mandiri, JakCard from Bank DKI, etc.) to board the bus. Cards are available for purchase and top up at most shelters. You can also check the availability and real-time schedule of TransJakarta buses with the Trafi app. 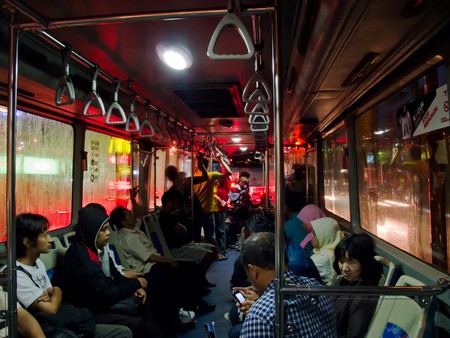 This commuter rail system will not only take you places within Jakarta; the line continues as far as Bogor, Tangerang, Bekasi, and more. In fact, the KRL Commuter train is the main mode of transportation for people living in Jakarta’s satellite towns that work in the city. That said, the trains tend to be swamped during peak hours, so you may want to avoid taking the train around 7-8am and 6-7pm.

Local tip: Train stations may not have dedicated platforms for trains going different lines, so make sure you know what trains to take before boarding. Ticket cards can be purchased via a card vending system in each train station, but the queue may be long and slow, so you may want to use your prepaid cards to save time. 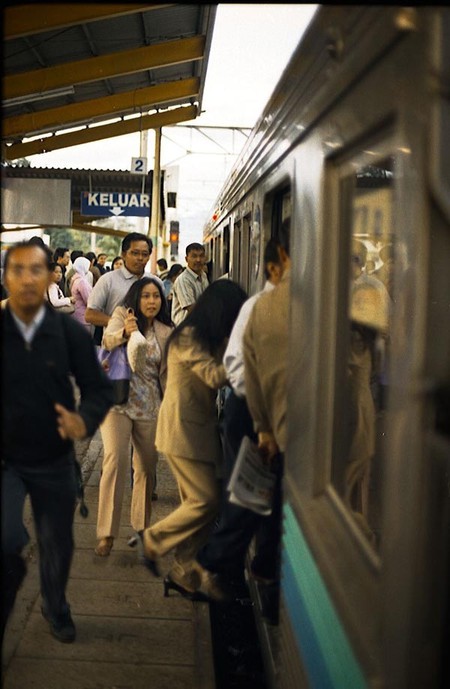 Rushing into the train during rush hour | © Danumurthi Mahendra / Flickr

Jakarta has many bus operators with different routes, fares, and qualities. Which bus you board will depend on your location and destination, as they’re not integrated with one another. There are dingy, non-air-conditioned buses like Kopaja or Metro Mini that run shorter routes and better, air-conditioned buses for longer courses. Only some of these buses operators have a fixed schedule (especially the air-conditioned ones of patas bus), and even so they may come and go as unpredictably as a traffic jam. Kopaja and Metro Mini do not follow a schedule, they just depart when the seats are full or whenever the driver feels like it, but they are ubiquitous so you don’t have to worry when you miss one.

Local tip: Passengers pay cash on these independent buses. Make sure you have smaller bills to pay the fare. Also, many of these buses do not stop in shelters along the way, so if you need to make a stop somewhere before the final destination, let your driver or kenek (the person who collect the fares) know.

It’s pretty easy to spot and hail a cab in Jakarta, you just wave your hand or point at the vehicle and they will stop for you. If you’re hailing a taxi from a relatively remote or quiet place, the drivers may set a fixed fare for you instead of going with the taximeter. If you’re not comfortable with this, just pass and go with another driver – they may be trying to scam you with a more expensive fare, but often drivers just want to collect the fee for themselves instead of splitting it with the taxi company.

Local tip: Blue Bird remains the most reliable and trustworthy taxi operator in Jakarta and perhaps Indonesia, though the fare may be slightly higher than other taxis. Another trusted operator with a more low-cost fare is Express. 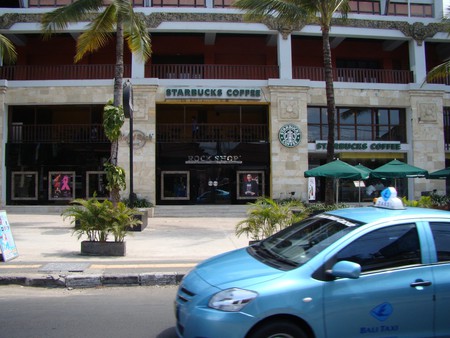 In Jakarta’s wild traffic scene, a motorbike taxi or ojek is often a much more viable option, as it can weave through the jammed cars and buses and therefore get you places faster. Ojek drivers are on virtually every corner throughout Jakarta’s busiest neighborhoods, just approach them and state your destination. The driver will give you a helmet and take you where you need to be.

Local tip: As there is no fixed fare for this transportation, always ask the price to your destination beforehand. This will avoid confusion and overcharging. Also, drivers tend to ask for a ridiculously high price at first, but most of the time you can negotiate for a lower fare. 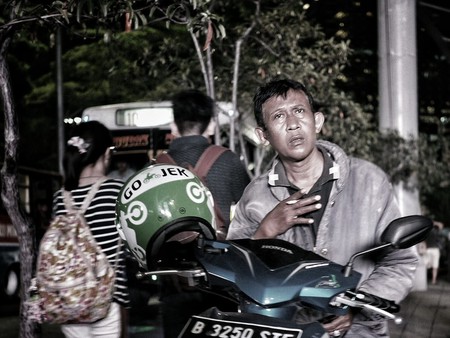 Minibus taxis operate through most areas in Jakarta (except the fancy business and lifestyle districts) and go shorter routes. These do not have air-conditioning and run without any fixed schedule. But the convenient thing is that you can hail and stop anywhere you want with this minibus taxi. Just yell ‘kiri’ (kee-ree) or simply say ‘stop’ wherever and the driver will drop you off.

Local tip: Drivers may wait for the entire car to be filled, and this can take a while. If you hate to wait, board the car that is already filled instead of the empty ones. 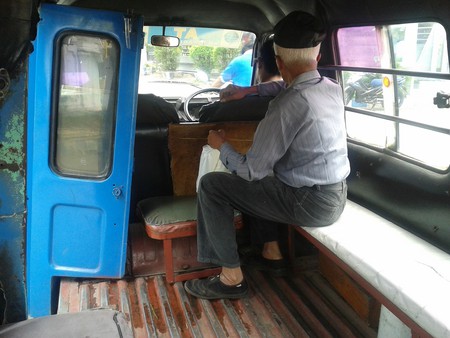 As per April 2018, Uber is no longer operating in Indonesia and other Southeast Asian countries after being acquired by Grab. You can still use Grab to hail car rides, motorbike taxis, and order food. Grab translates your conversation automatically, so don’t worry if you can’t speak the local language. Another reliable alternative is the local app Go-Jek – beyond transportation, you can also buy movie tickets, order food, buy phone credit, shop, and order other services such as home cleaning and massages with the Go-Jek app.

Local tip: If you want to go cashless but have trouble topping up without a local bank account, you can ask your driver to do it for you, and just give him or her the money.