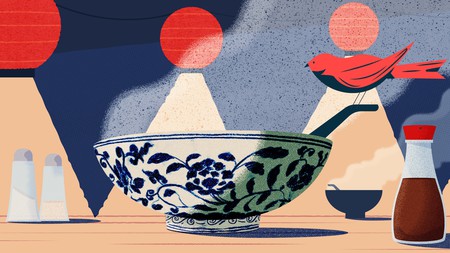 Bird’s nests are an important part of Chinese culture, long cherished for their purported health benefits and for being marks of class. In Indonesia, however, the bird’s nest craze is a multi-million dollar industry turning spit into serious coin.

In early Chinese civilisation, bird’s nest soup was accepted with great honour and gratitude. After all, not everyone was privileged enough to be presented with this gelatinous bowl of bird saliva – or as some call it, ‘Caviar or the East’. That reputation has lasted over the years. With a current retail price of $2,500 to $8,000 per kilogram, the moniker is very fitting.

The emperor and his bird’s nest soup

The particular species of ‘bird’s nest soup’ fame, the swiftlet (or aerodramus fuciphagus), crafts nests entirely from its own spit. These birds weave gummy strands from their salivary glands, which solidify when coming into contact with air. These white, cup-shaped filaments are attached high on the walls of caves, safely away from the reach of predators below.

When soaked overnight and boiled in water, these nests turn into a hearty gelatinous soup. The dish was favoured by generations of ancient Chinese royalty dating all the way back to the Tang Dynasty some 1,200 years ago. It has been a staple in the diet of emperors and is sometimes served with shredded chicken or duck.

More than just a luscious treat, bird’s nest soup is centuries of culture and superstition in a bowl. Swiftlets’ nests can be found on the racks of traditional healers who use them in tonics to boost vigour, prevent colds and maintain youthfulness. In fact, in a culture that glorifies longevity and vitality, it was the bird’s nests’ purported health benefits that first appealed to Chinese emperors. It should not be forgotten they were also believed to have aphrodisiac properties.

Traditional medicine aside, recent studies have linked nutrients found in edible bird’s nests with a long list of health benefits, from inhibiting infections to promoting skin regeneration. Studies have also revealed that these nests are very high in protein, making it popular among Chinese parents who want their babies to grow up smart, big and strong.

Indonesia as a bird’s nest powerhouse

Bird’s nest fans in China owe their superfood to the tropical regions of the Indo-Pacific, specifically Southeast Asian countries like Indonesia and Malaysia, where this type of swiftlet thrives. Even since its earliest days of consumption, Chinese traders ventured off to the ‘southern countries’ to acquire this elusive commodity.

Indonesia, in particular, is a juggernaut producer of edible bird’s nest. According to Dr Boedi Mranata, president of Indonesian Bird Nest Association, current exports from Indonesia account for about 80 per cent of total bird’s nest production on the planet.

The Indonesian Bird Nest Association can only estimate the total number of bird’s nest farmers across the country, as many go unaccounted for. It coordinates with about 300 official exporters, 100 of which managed about 90 per cent of total exports to China. There are thousands of more farmers across the country, tending no less than 100,000 swiftlet houses with varying success and quality.

How bird’s nests are cultivated

Since at least 150 years ago, households in Java and other parts of Indonesia have become used to having swiftlets around. These birds like to harbour themselves in dark, humid parts of the house such as attics or anywhere that resembles their natural habitat (sea caves). Locals have been harvesting the their nests since day one, fostering a symbiotic relationship for generations – humans provide the shelter, the birds provide the nests.

Dr. Boedi Mranata, who is often referred to as the ‘Swiftlet King’, is a businessman, activist and researcher. Using his knowledge in biology and talent for keen observation, he’s developed a science-based standard to boost the chances of fruitful yieldings of bird’s nest. It includes factors such as house conditions to attract swiftlets.

Nowadays, serious swiftlet farmers set up entire homes for the swiftlets (not just letting them live in their attics). Ideally, a swiftlet house should be at least five to six metres high without the ceiling, which is crucial to set the temperature and humidity. Swiftlets tend to prefer high ceilings because they create cooler temperatures.

While building the house, farmers also consider the materials used to construct the walls: mostly a mixture of sand, chalk and cement with a specific ratio to simulate sea caves. The surroundings of the swiftlet house are also crucial. The birds tend to prefer airy environments, without too many tall trees towering over the house.

After establishing the swiftlet house, the next step would be coming up with a strategy to attract the birds. Modern farmers use sound recordings of swiftlets and place a modified tweeter inside the house to reproduce high frequencies the birds can recognise. Ideally, farmers play different sounds according to a specific timeframe: mating season, breeding season or spawning season.

Dr Mranata, who is also a doctor in biology, points out how swiftlet ‘farming’ is different than any other forms of animal farming we know. “Farming implies that you dedicate a portion of land for the animals, close them in and feed them,” he explains. “Swiftlets are free to fly anywhere, they can disappear anytime – this is more like a hotel for them.”

The perils of swiftlet farming

Swiftlets usually enjoy a good level of welfare in this tradition of semi-domestication. In fact, a farmer’s success depends on his or her ability to create and maintain an ideal habitat specifically for swiftlets. Otherwise, the birds may leave and search for better living conditions.

Even so, some farmers still incorporate unethical practices into their farming. This includes harvesting the nest before the eggs are laid, which can cause trauma to mother birds. Harvesting a nest with eggs or young birds inside it also poses ethical concerns that farmers should heed.

Other than that, swiftlets usually have no problem crafting a new nest after their old ones are harvested, as long as farmers don’t do it too often – ideally not more than once every few months.

Despite all the delicate conditions and monetary investment needed to farm swiftlets, this is still a high-risk industry. According to the Indonesian Bird Nest Association, only five per cent of the 100,000+ farms in Indonesia yield at least 10kg per year. For context, Indonesia’s annual output to China is 1,100 tonnes. Failures to produce profit and massive loss of capital are not unheard of in this industry.

There are just so many things that could go wrong such as failing to attract swiftlets or environmental changes like lack of food in the ecosystem that drive the birds away.

Harvesting is another challenge in itself. Swiftlets like to establish their dwellings high in ceilings, which has proven to be potentially life-threatening for people who collect the nests.

A lot of things have changed in the practice of cultivating bird’s nests. Early swiftlet farmers used to credit the success of their yields with a person’s luck (or kismet), whereas people today use research and science to guide their practices. What has not changed much since the early days is the dynamics of the trade itself, as countries like Indonesia cultivate the birds, harvest their nests and send them on their way to China.

Indonesia’s bird’s nest industry experienced serious backlash in 2011 when China imposed a ban on Indonesian exporters due to a high concentration of nitrate, lead and arsenic found in some products. As per October 2018, only 21 out of more than 100 exporters in Indonesia passed the long and tedious certification process according to new regulations, allowing them to sell.

Consequently, the amount of legally exported bird’s nest has shrunk significantly. In 2017, only 52 tonnes were legally traded to China, with the remaining illicitly sold in black markets via a third party in countries like Vietnam. The Indonesian Bird Nest Association estimates that the legal figure will improve to about 100 tonnes in 2018, while the remaining companies struggle to make their way to China’s approval.

Dr. Mranata sees how this control is crucial to China. “This is a food consumed by top officials, and regularly,” he pointed out. “Also, a large portion is consumed by babies and pregnant mothers, who believe in the health advantages for children’s growth and development.”

Today, despite being dubbed a prestigious ‘caviar of the East’, there are still cheaper alternatives utilised by everyday people in China. A lower quality and illegally exported edible bird’s nest can be sold at the market for $700 per kilogram, which is less than one-third of the price of the premium traceable product.

“If you eat three grams per day, you’ll only need about one kilogram per year,” said Dr Mranata. “And for these people, it doesn’t matter if it’s of the lowest quality, it’s still bird’s nest.”