How I Learned to Surf in Bali

The majority of summers growing up were spent at the Jersey Shore. At first, my family would cram into these little motel rooms near the beach in Seaside Park, N.J. Eventually, motel rooms evolved into bungalow rentals.

Tired of arranging accommodations for a week or so every summer, my parents decided to purchase one of those bungalows in 1995. They told my brother and I that if they bought this house, we wouldn’t go away on family vacations; the house would be our vacation. We eagerly gave our stamp of approval and have been frequenting the house since.

Following the last day of school each year, we would pack into the car and drive the hour and 15 minutes from our “main” home to the beach. The rides down the shore were the most exciting thing ever, knowing we had two-plus months at our little getaway. We’d stay at the beach through Labor Day Weekend, coming home the day or so before the next school year started, with just enough time for back-to-school shopping to get binders, colored pencils and whatever other supplies we needed. There was even a fall I came back with blonde hair from so much time in the sun (the peroxide helped too).

Summers at the shore for two young boys would be exactly as you could imagine—endless hours in the sun and sea, a lack of shirts and footwear, and nights biking around town, usually without a plan—of course there was a little mischief involved, but c’mon, we were teenagers.

The waves at our beach were, as most in New Jersey, inconsistent. Sure, the occasional swell would come through, but more times than not, they weren’t anything worth bragging about. The days before and after an off-shore storm, particularly a hurricane, brought the largest swells.

My brother and I got into body boarding (also known as boogie boarding) at a young age. We had our matching rash guards and board bags, though our boards and fins differed in color. He dabbled in surfing for a few summers, but it never appealed to me. I thought, “Why waste my time surfing these waves? They aren’t worth it.” Sure, I took his board out once or twice and obviously failed to make any headway with a new venture, but I’ve always had an itch to learn.

So when Volcom reached out and invited me to Bali, Indonesia, one of the meccas of the sport, I immediately thought: “This is where I’ll learn to surf.”

On our second day in Canggu and under the guidance of not one, but two professionals, I stood up on my first wave—on my third attempt, mind you. (I’m as impressed as you are.)

We rented a long, wide board from a local warung and took to the sea. The swells were a good height in the distance, but we started further inland—on the beach, in fact—before venturing out. 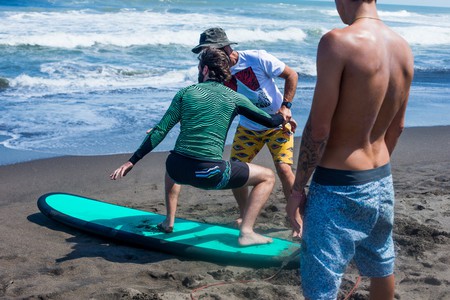 Conquering the sand before the sea | © Luke Forgay/Volcom

Like the hilarious scene in Forgetting Sarah Marshall (2008) where Jason Seigel’s character is taught to surf by Paul Rudd’s in Hawaii, I couldn’t help but laugh every time Matt Bemrose, a former pro and current Volcom Global Team Manager, said “pop up” with his Australian accent. I kept waiting for one of us to continue mimicking the movie scene, but we were all business.

It was finally time to take to the water. Obviously I’ve been a “water baby” my whole life, so the task didn’t seem daunting. I was used to the waves, used to currents, used to the power of the ocean. I wasn’t used to standing on a board—outside of a quick pop up on my body board with fins, which usually lasted all of three seconds. I also wasn’t used to having an audience. Outside of my instructors, Bemrose and New York-based pro Balaram Stack, I had the eyes of three cameras pointed on me, as well as intrigued Volcom pros sitting on the beach anticipating a good laugh.

The lesson started out strong at the shore breaks. I stood on my third wave and felt invincible. I had a smile from ear-to-ear as I paddled back out to my instructors, who yelled words of encouragement, coupled with high fives and pats on the back. With the small waves conquered, it was time to venture out further and catch the waves as they broke. This proved a little more challenging, but I was able to stand up and get a decent ride again. If I could have ridden that wave right up the sand and past the houses, through town and to the beach on the other side of the island I would have, but I had to bail before crashing into the shoreline. 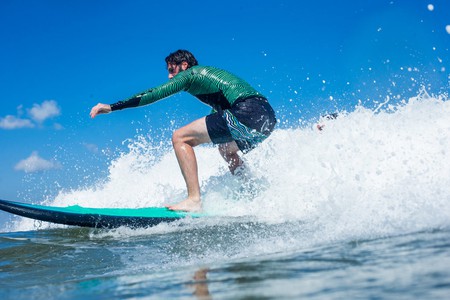 I was asked multiple times if I was ready to go out further. To the waves the pros catch. I had passed the first two challenges, so why not? Just getting out proved difficult as, of course, a massive swell came through and pounded the three of us. I remained calm—they were impressed—and we eventually made it out to the break. I’ve been on “big” waves, but never while surfing. I was a little nervous, but couldn’t pass up on the opportunity to show my skillset. To say I got beaten up was an understatement. I crashed hard on one ride, my board nose-dived straight down on another, and I was tossed to and fro like a rag doll. Still, I pressed on.

I never caught a wave like the pros, but at least I tried. In Bali of all places. 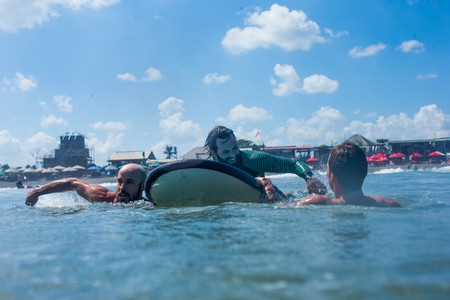 If at first you don’t succeed, you paddle back out | © Luke Forgay/Volcom

I returned to the beach to praise and high fives from the Volcom team that had been watching. Later that night after dinner, we reviewed some of the photos from the day. The good ones elicited more praise and excitement, while the ones of me about to get thrashed by good ol’ mother nature brought out a few good laughs and smiles. 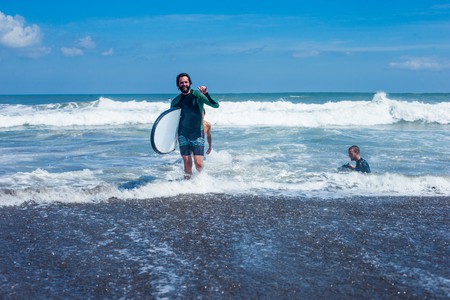 Had a blast learning to surf with Volcom | © Luke Forgay/Volcom

I posted one amazing shot of me surfing—actually surfing!—on social media. My mother commented: “Beach house for 20 years….and you go to Bali to learn to surf! SMH”

It’s a tad ironic, but an opportunity I couldn’t pass up. Maybe I’ll take my new talents back to New Jersey now that I’m a big-time global surfer.

Travel and accommodation in Bali provided by Volcom.