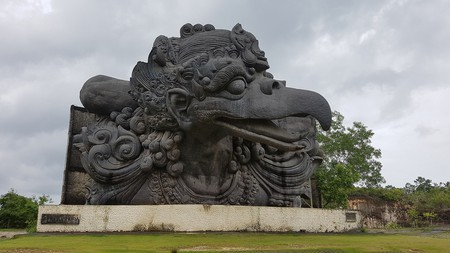 Insignias can be taken for granted, but more often than not they convey an important underlying story that helps shape a country’s identity. Read more to learn about the fascinating Garuda, Indonesia’s legendary bird, and national emblem.

Countries use animals as their national emblems. Australians have the kangaroo and emu on their coat of arms, while the Netherlands has lions in its national emblem. But unlike these, and many other countries, Indonesia’s national emblem is not an actual animal, but a mythological bird from an ancient saga.

In Hinduism’s Mahabharata epic, Garuda is a half-human, half-bird creature, with red wings, white face, and a figure so big that it covered the sun whenever he flew by. Garuda was born as the child of a priest, Resi Kasyapa, and was given special powers by the gods from the moment he ‘hatched’.

Soon after he was born, Garuda was faced with a task to deliver his mother, Winata, from the fraudulence of his father’s other wife, Kadru. He redeemed his mother with a sacred water he worked so hard to acquire, making Garuda an epitome of sacrifice and loyalty. 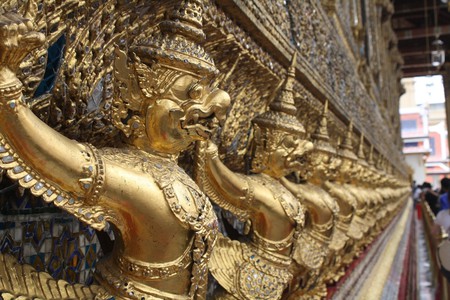 Garuda embellishment in a palace in Bangkok | © clarkelz / Pixabay

This legendary bird made its way to the literature of both Hindu and Buddhism, which makes him a known mythical creature in many cultures, from Mesopotamia to India and Southeast Asia. In most folklores, Garuda is known as a vehicle for the gods — in Hindu, he is the means of transport of Lord Vishnu, the god of protection and preservation.

Considering its origin, it may be odd to think that such Hindu deity can somehow end up in the coat of arms of the largest Muslim population in the world. It’s important to remember that long before Islam even entered the archipelago, the land that now constitutes modern-day Indonesia was ruled by different Hindu and Buddhist kingdoms. During those times, legends and folklore from the two earlier religions greatly shaped the nation’s belief system and culture.

An impressively ornate statue of Garuda can be found in the country’s largest Hindu sanctuary, the Prambanan Temple, and many other sacred spots. The mythical bird also made its way to wayang, the traditional puppet of Java. From religion, the deities are now interspersed with culture and even daily lives. 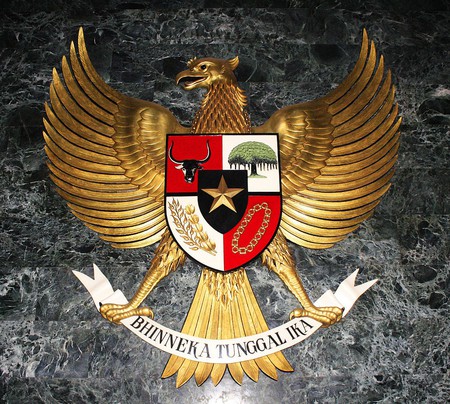 The national emblem of Indonesia was first designed by Sultan Hamid II from Pontianak, before being modified by the first president, Soekarno. During the first few years of independence, the Garuda emblem went through several changes and transitions, such as omitting the human-like properties to make the figure look less mythological and more realistic, resembling the Javan Hawk-Eagle. A crest was added to make it look less like the United States’ bald eagle, and other changes in details and scales.

Symbols of nationality and independence are also part of the Garuda figure that holds Indonesia’s five foundational philosophical principles together in a shield, also gripping a banner that says Bhinneka Tunggal Ika (Unity in Diversity) in its talon. The figure has eight strands of feathers on the tail, 17 feathers on each wing, 19 feathers under the shield, and 45 strands of hair on the neck, symbolizing the date of independence, August 17, 1945.

Garuda’s pervasive presence in many cultures makes him a celebrated figure adapted in many countries. Thailand’s national emblem is also Garuda, but with a depiction much closer to mythology than the one used in Indonesia, with a human torso and red feathers. For Indonesians, the emblem of Garuda is more like an integration between ancient history and contemporary values and symbols that make the country unique.