Ari Mahardhika: The Many Faces of Indonesian Art

Ari Mahardhika is an Indonesian photographer based in Hong Kong. His extensive photographic portfolio includes self-portraiture and landscape photography. Constantly experimenting with different visual and technical effects, Mahardhika has formed a visual language that is both beautiful and humorous. 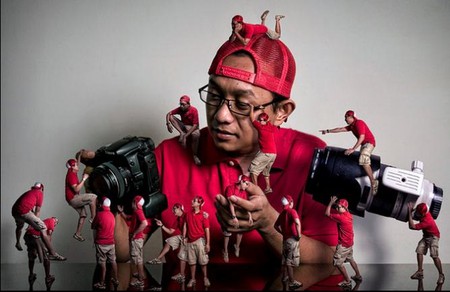 Mahardhika’s ‘mini-me’ series playfully captures the meeting of photography and technology. It is comprised of photos in urban environments and secluded settings which show numerous miniature Mahardhikas hanging off, pointing at and grabbing a giant Mahardhika. The process itself is relatively simple as Mahardhika begins by writing notes and documenting ideas about the relative positions of the miniature versions of himself. Once he has these clear in mind, he then photographs himself against a blank background with accurate lighting techniques and angles. These photographs are then digitally manipulated before being amalgamated into one image that tells a specific visual story. Mahardhika will add light and shadows to the final photomontage to conjure the illusion that the photograph depicts an actual scene.

Each photograph varies as Mahardhika places the miniatures in either everyday scenes or beside a humorously scaled up version of himself. The photograph visually centers around multiples of Mahardhika, yet the overall process is about the artist’s attempt to understand his multi-faceted character. Mahardhika navigates his way through internal conversations attempting to understand himself as an individual and uses the photomontage as a tool to establish a relationship between the various aspects of himself. 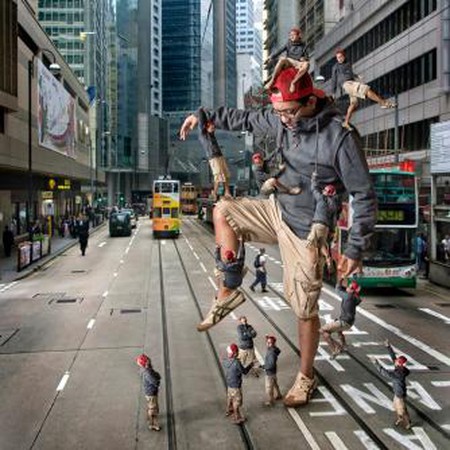 One appeal of Mahardhika’s photomontages is their relatable and accessible nature. His use of digital manipulation is well practiced, which is not only apparent in the realism of his work, but in its overall message. The implemented backdrops included in Mahardhika’s images show urban bustle, which can be interpreted as a exploration into one’s sense of belonging – where do we as individuals fit into our social context? How do our different sides and personas adapt to our immediate environment? 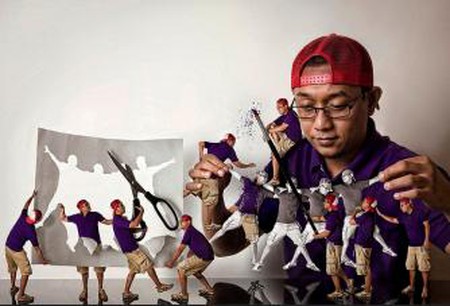 However, there are Indonesian artists who do not feel the need to use art in this way, and instead engage with discourse on a personal and global scale. Installation, performance and video art are rife with these contemporary themes, yet these forms must compete with the commercial wave in Indonesian art. With no national art collection or government grant schemes for artists, there is a great risk of Indonesian artists ‘selling out’ and creating art out of financial desperation. However, with pockets of art stemming from the various commercial, social, political and personal aspects of Indonesian culture there is a diverse and dynamic contemporary art scene.

Mahardhika’s work captures experimental possibilities of photography and technology to form a playful and creative visual language. As an Indonesian artist he is contributing towards the globalisation of Indonesian contemporary art, and is an example of the creative force coming out of Indonesia today.