A Guide to We The Fest: Indonesia's Biggest Summer Festival 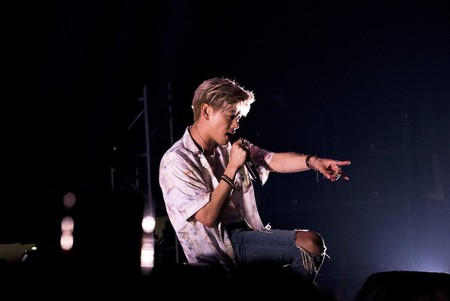 Standing out from Indonesia’s sleepy festival culture is We The Fest: a wildly popular celebration of life and music that offers locals so much more than flashing lights and world-acclaimed artists. Here’s how you join the revolution.

Every year, We The Fest (WTF) brings in legendary parties that are only topped by the following year’s. People from all walks of life come to Indonesia’s capital to embrace this annual event with all its festivity. And they come for different highlights too, as the festival builds up its revelry across many fronts – music, art, fashion, food, and more.

We The Fest (WTF) is arguably one of the most anticipated festivals in Indonesia (and even Southeast Asia). This annual summer festival is held upon the pillars of music, food, fashion, and art, presenting the best parts of Jakarta’s vibrant cultural scene.

Organised by Ismaya Group, one of Indonesia’s biggest and most reputable lifestyle brands, WTF first graced the nation’s festival scene back in 2014. Ever since, the event has gained increasing momentum, outdoing itself every year with more diverse acts, bigger headliners and more creative themes. 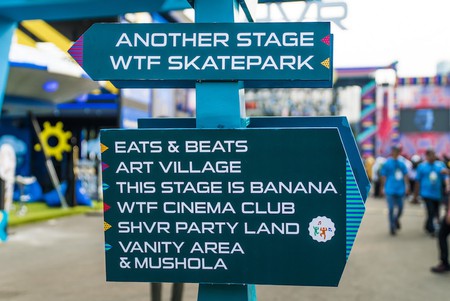 In 2017, 50,000 people attended including some of the nation’s A-list public figures. It’s where festival-goers rub shoulders with Indonesia’s social media personalities and celebrities. The country’s president Jokowi even made an appearance in the same year.

That was also the year where enormous demand from festival-goers relocated the event to Jakarta International Expo, a much bigger venue which has hosted some of the biggest global-scale events in the city. It was also the first time the festival was held for three days instead of two, delivering more artists for excited revellers. 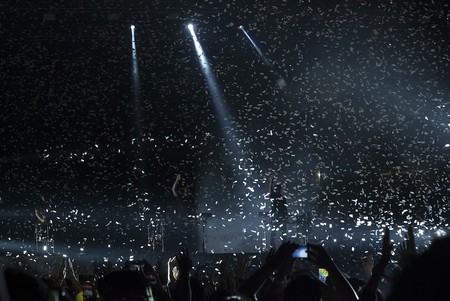 Festivity at We The Fest | Tatyana Chung / © Culture Trip

There are many ways to acquire tickets to WTF, especially if you live in Indonesia. Ismaya Group’s establishments like Pizza E Birra and Kitchenette sell tickets in Jakarta, Bandung, and Bali. Otherwise, you can purchase them online from one of their ticket box partners, including GO TIX and Tokopedia. If you’re from outside Indonesia, Viagogo is the international ticketing partner.

General Admission gets you to all of the stages and main areas, but Very Important Bananas (VIB) enjoy more privileges like queue jumps, exclusive viewing areas and special bar and lounge services. If that’s not enough, upgrading to Very Very Important Banana (VVIB) will entitle you to a private cosy cabana with party gear, complimentary merchandise, and valet service. Regardless of the extra frills, Culture Trip can testify that General Admission is more than enough to have a good time. 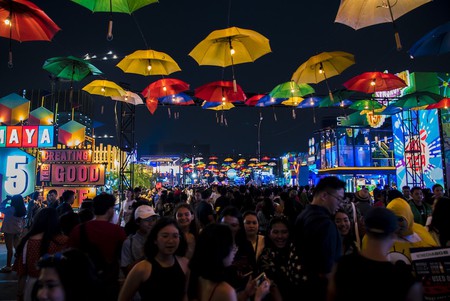 For an even more convenient experience, the travel packages cover your 3-day hotel bookings and festival tickets for two. Especially if you don’t know your way around Jakarta, this bundle will make sure you find yourself in a strategic location, away from the notorious city traffic.

Tickets are either for daily entry or 3-day pass. Either way, you’ll get a wristband you should keep on for as long as you plan to participate in the festival. If you’re purchasing the 3-day pass, you’ll have to keep it on for three days, because once you remove it, you won’t get another chance to reuse it and there will be no wristband replacement for you.

Your wristband will also be your wallet for the festival. Top up at one of the booths with card or cash, then simply scan your way through the various local food and drink stalls on offer.

The expansive venue isn’t hard to navigate, given the neat layout and plenty of maps to help you around. Since 2017, the festival comprises three main stages for music performances. The main stage is outdoors, centrally located and has the biggest area surrounded by numerous booths from sponsors and partners. The second-biggest stage is located inside the hall, and therefore air-conditioned. The third stage is usually graced with the best local talents, conveniently located next to the main stage. 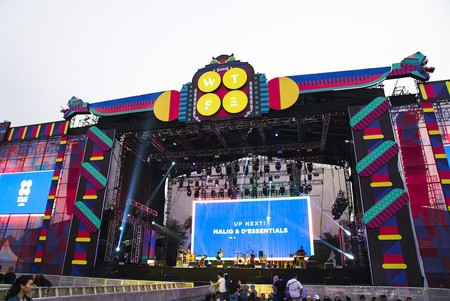 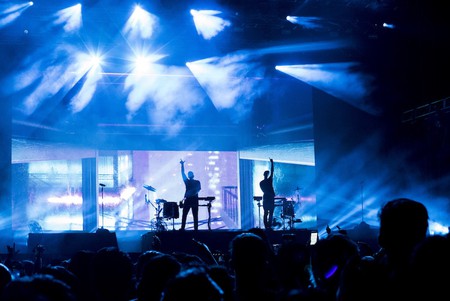 Inside We The Fest's indoor stage | Tatyana Chung / © Culture Trip

Beyond the stages, the festival covers more highlights and activities to engage in. Culture Trip recommends downloading the We The Fest app (Android | iOS) if this all sounds a bit overwhelming. It has an interactive map, schedule, directory, and more.

It’s hard to pinpoint the exact genre you can expect at this festival, and we mean that in a good way. If anything, WTF has been consistent in curating a diverse lineup, gracing the stages with anything from rock to rap and disco to EDM. Headliners in 2018 included pop superstar Lorde, R&B legend Miguel, and Korean sweetheart Eric Nam, among others. 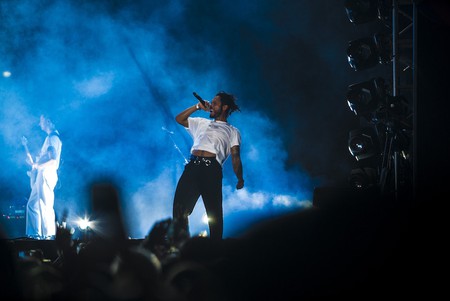 WTF has been loved locally for making many an aspiring musician’s dreams of rock stardom come true, inviting noteworthy up-and-coming artists to take the stage. Big names were given the chance to play here before they got famous, including indie trio Bitzmika and the elusive Diskoria. 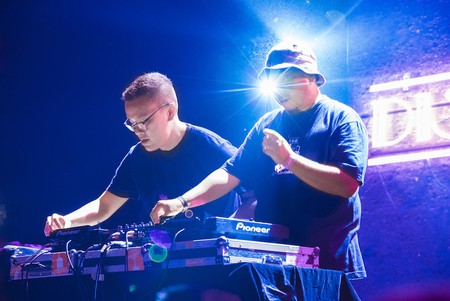 Ismaya Group has popular restaurant chains around the country, so WTF is especially well-catered for. The ‘Eats & Beats’ area brings together Ismaya restaurants like Tokyo Belly, Kitchenette, The People’s Cafe and more in one area. But more than your usual orders, the eateries also serve festival-special creations you can only find then and there, many of which are inspired by the performing artists that year. 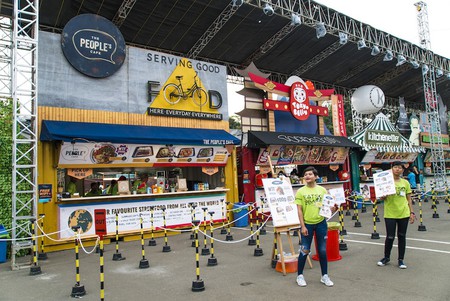 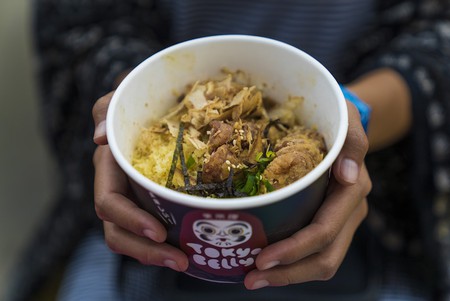 There are also food-related activities for those who want to take it to the next level. From eating challenges to cooking battles there’s a lot of gastronomic fun here beyond the music.

Year after year, the organisers keep on incorporating art as one of the main foundations that put the ‘fest’ in ‘We The Fest’. Fresh and original artworks always have a special place in the festival, from murals and installations, to artworks inspired by performing musicians of the year. This year’s Art Village also hosted free workshops for those who yearn to create. 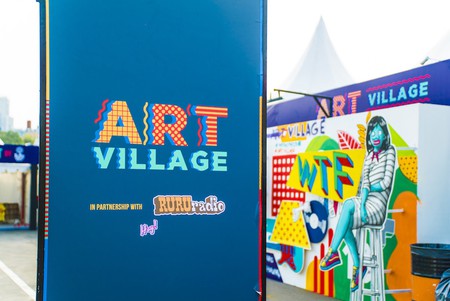 WTF is also one of the most aesthetically-pleasing festivals you’ll ever attend. Photo opportunities are around every corner, from the official festival backdrop to effortlessly charming nooks or booths scattered across the venue. 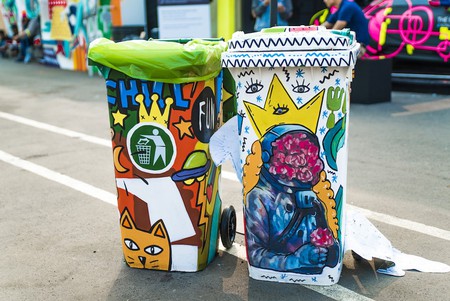 Each year, We The Fest brings together different zones and activities. In 2018, the festival put together a skate park, where attendees could borrow gear and get staff to guide them through the pyramid and quarter pipes. 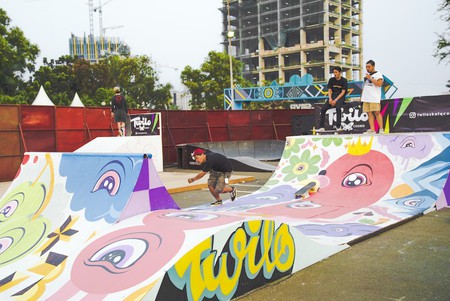 There’s also WTF Cinema Club, bringing short films curated by the British Council, Kinosaurus, and Institut Francais d’Indonesie. Make sure you arrive earlier than your favourite band’s stage time to be able to explore and take all the experiences in. 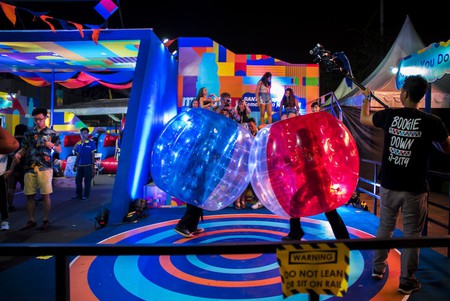 What – and what not – to bring

Unless you opted for the wristband to be delivered to your door, you’ll need a valid ID or passport to make the exchange. There is an ATM machine at the Niaga building nearby, but you may want to make a withdrawal before just in case the machine is not working or there’s a long queue.

Outside from the usual prohibition of illegal drugs and weapons or sharp objects, the festival doesn’t allow water guns, noisemakers, laser pointers, bottles, and opened packs of cigarettes. Umbrellas are also prohibited, but feel free to bring a raincoat just in case.

Bringing food and drink from outside the festival is also not allowed, so be prepared to spend.

Jakarta International Expo or JIEXPO is located at Kemayoran, North Jakarta. Whether or not you’re staying nearby, ride-hailing apps like Go-Jek or Grab are your best friend here – both can get you a dedicated car or motorbike to take you directly to the venue entrance at an affordable price. 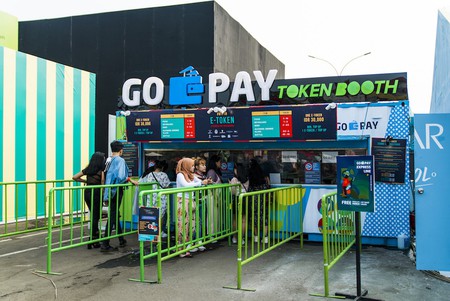 Attendees can also take the train or TransJakarta bus to JIEXPO. The nearest train station to the venue is Rajawali Station, which is a walking distance away at less than a kilometre. But if you’re arriving late or alone opt to stop at Kemayoran Station, which is a little further away but much livelier and safer. You can order your ride from either of these stations.

The TransJakarta line can get you within two kilometres of the venue, from which you can continue using ride-hailing services. Find your way to Corridor 5, 7B, or 12 and stop at Jembatan Merah shelter.

The flow of people and vehicles after the festival may create a queue of traffic, so be prepared for it. This year, the festival partnered with Go-Jek and managed to arrange a dedicated pick-up point that makes it easier to meet up with your motorbike drivers from the service.