Things You Should Know About Penang’s Blue Mansion 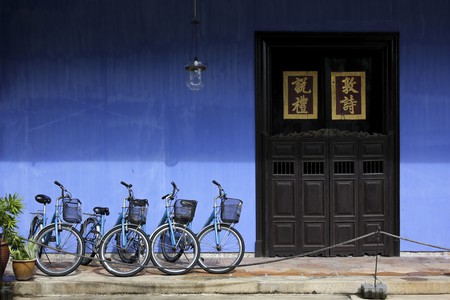 Cheong Fatt Tze Mansion – better known as the Blue Mansion because of its dazzling indigo-coloured facade – is a landmark heritage building on Leith Street in the UNESCO World Heritage city of George Town in Penang, and a site that looks like the perfect setting for an atmospheric Asian Gothic novel. Built in an architectural style known as Straits Eclectic, the mansion is currently a boutique hotel with a pool, a fine-dining restaurant and a bar. Visitors can also pay a fee to join daytime tours of its public areas. But before you seek out the Blue Mansion, here are some facts (and some hearsay) that will provide more context for your visit.

Who was Cheong Fatt Tze?

Born in 1840, Cheong Fatt Tze – the original owner of the mansion – was a Chinese businessman who was known as the ‘Rockefeller of the East’. Born to a poor Hakka family in Guangdong, China, in 1856 Cheong emigrated to Jakarta – then a Dutch colony named Batavia – at the age of 16. Without a penny to his name, he worked as a water carrier and shopkeeper before becoming a hugely prosperous and influential industrialist, politician and philanthropist. In Jakarta, Cheong’s fortunes changed when he was mentored by his wealthy merchant father-in-law, who helped nurture his business acumen. Cheong then embarked on many lucrative ventures. He invested in rubber, coffee, tea, cattle, textile, glasswork and banks, and expanded his empire into Medan and eventually Penang, which became his base. He started a steamship line and inaugurated the trans-Pacific shipping line between China and the USA, served as the consul general in Singapore and was an economic advisor – known then as a Mandarin – to China’s Empress Dowager, and also founded Chang Yu Winery in China in 1892. The mansion was his home and office up until his death in 1916. 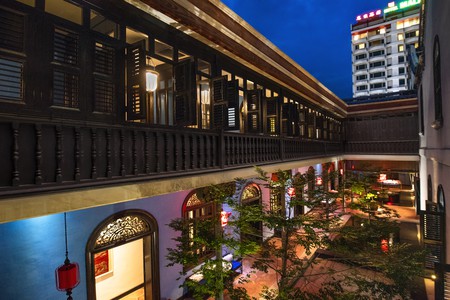 Why is the Mansion blue?

There is a Chinese belief that white is associated with death and mourning, so Cheong decided to paint the walls of his house bright blue for a cheerier effect. The eye-catching blue paint was made with a natural blue dye from the indigo plant, mixed with limewash. “Indigo was a colour highly prized at the time when the mansion was constructed. Produced in India, Indigofera arrecta or tinctora had crossed cultural barriers and was used in mosques such as the Acheen Street mosque in George Town, parts of Suffolk House, internal sections of Chinese temples and a large percentage of ordinary houses in the Straits Settlements in the early 19th and 20th centuries,” says Aja Ng, the Blue Mansion’s head of public relations. Limewash was ideal for the tropics, as it absorbed moisture to help prevent mould in humid conditions. 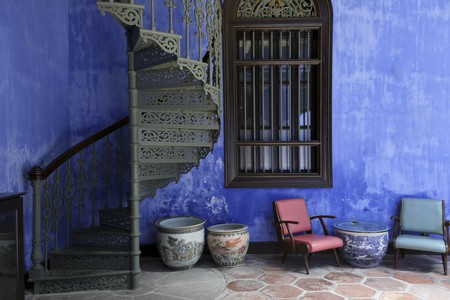 A love gift for his seventh wife

During Cheong’s time it was not uncommon for wealthy Chinese men to take many wives, and Cheong had a total of eight. For him, marriage was as much about securing business associations with the right families as it was about romance. But this changed when, at the age of 70, he met 17-year-old Tan Tay Po, who became his seventh wife. Like the Taj Mahal, the Blue Mansion, which he started constructing in the 1880s, was his love gift to Tan and the place where the couple made their home. 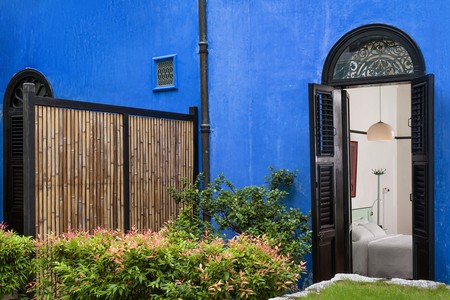 Built in the style of Southern Chinese courtyard mansions, the Blue Mansion is unique because it includes many cosmopolitan elements – Art Nouveau stained glass from England, cast-iron balustrades from Scotland and French trompe l’oeil. The mansion is a stunning example of a type of architectural style found in parts of Southeast Asia known as Straits Eclectic. It was built with five courtyards, 38 rooms, 220 Gothic-style timber louver windows and plenty and intricate artworks such as chien nien – murals created out of tiny shards of broken porcelain along the doorways. 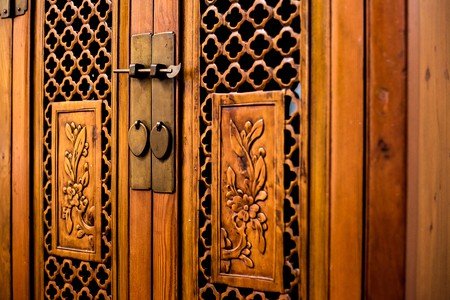 Despite the many Western style details, the layout and design follows the Eastern principles for feng shui – the philosophy of Chinese geomancy, which asserts that the layout and orientation of buildings can encourage positive or negative energy or situations. For example, in feng shui, the element of water symbolises wealth, so Cheong had coin-shaped inlets built on both sides of the central courtyard to collect rainwater, so only a little water – the symbol for money – would leave the house. The rest of the rainwater would be circulated through a system of pipes under the floor of the mansion. The number six connotes good luck and smooth business dealings in feng shui, so Cheong built six rooms in each wing of the mansion. 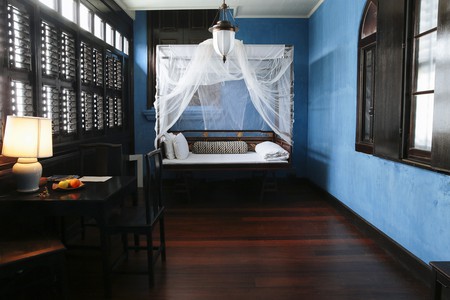 The demise and rebirth of the Blue Mansion

When Cheong was 74, he had a son named Kam Loong with his seventh wife Tan. In his will, he bequeathed the mansion to this son. Unfortunately, Kam Loong was not as savvy with money as his father was, and in his hands the mansion fell into ruin, even becoming a squat for to up to 30 families at one time. When Kam Loong died in 1989, the mansion was sold to a group of Penang conservationists who spent six years restoring it to its former glory. 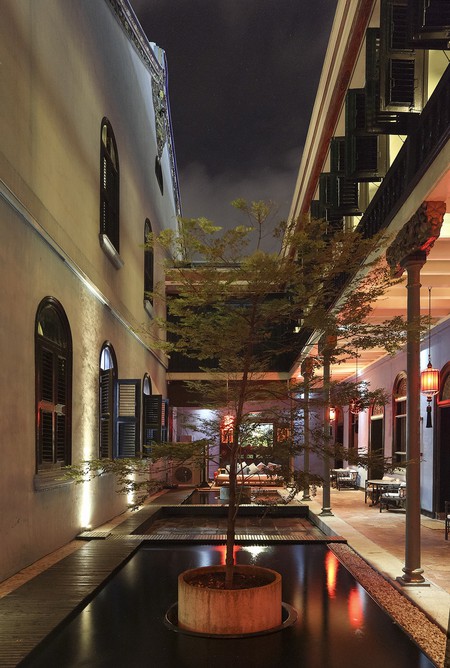 The mystique of the mansion has captured the imagination of many film-makers. The most well-known movies filmed here include the Oscar-winning French film Indochine (1992) and the Hollywood blockbuster Crazy Rich Asians (2018). Other movies filmed here include The Red Kebaya (2006), Road to Dawn (2007), 3rd Generation (2015) and, perhaps unsurprisingly, The Blue Mansion (2009). 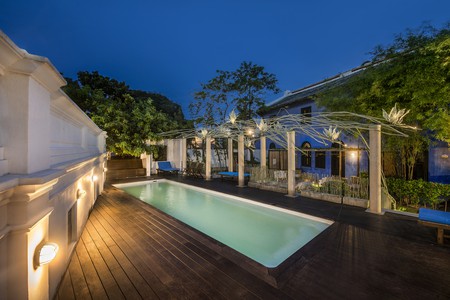 As with many old, opulent houses with a rich history, there have been rumours that the Blue Mansion is haunted. Some claim they have seen the ghost of Tan Tay Po, whose photo hangs along the hallway on the first floor. Some report that they’ve seen maids in the midst of their chores walking straight through the doors without opening them, and one person claimed to have seen an apparition of a crying boy on the spiral staircase. None of these tales have been verified, of course, and are most likely the result of overactive imaginations. But if nothing else, these ghostly tales seem only to add to the enigmatic personality of the enchanting mansion. 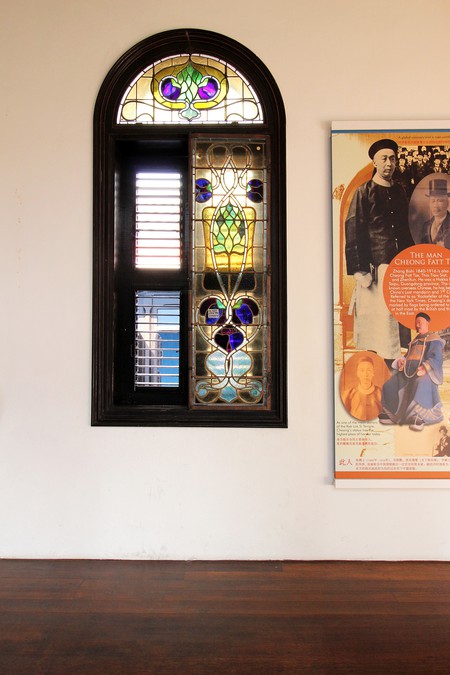 Things to do here

If you’re looking for a delicious meal in a romantic setting, you can reserve a table at Indigo, a fine-dining restaurant on the first floor of the mansion, where Penang-born Chef Weng whips up inventive East-meets-West cuisine. Or you can relax and enjoy a cocktail at The Bar, where you can enjoy hypnotic Chinese zither music on weekend evenings. You can join a 45-minute tour of the mansion that takes place at 11am, 2pm and 3pm from Mondays to Fridays, and at 11am and 2pm on Saturdays and Sundays. But if you really want to step back in time and experience the spirit of colonial Penang, there’s no better way to do so than to spend the night at one of the mansion’s beautifully designed 18 boutique guest rooms. 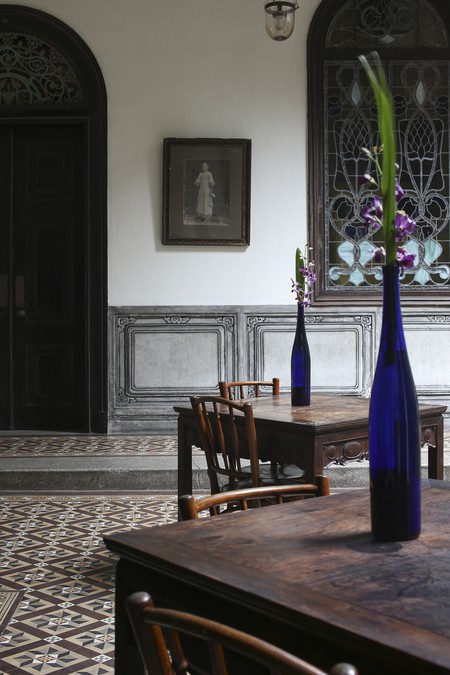