The 21 Best Dishes To Eat in Indonesia 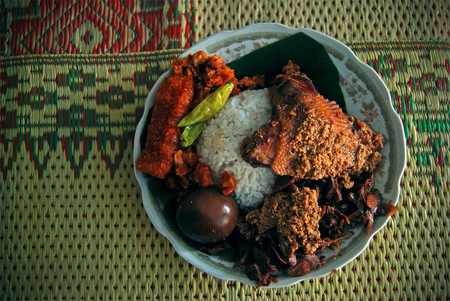 Indonesia’s rich and plentiful natural produce, herbs, and spices give its people a certain freedom to be creative and resourceful in creating traditional recipes that are not only delicious, but also tell stories about the culture’s customs and history. From the famed Indonesian fried rice to different soups, discover the best dishes in Indonesia you should try.

An ever-popular and versatile recipe, you can encounter the Indonesian fried rice anywhere from humble street food carts to high-end restaurants. The curious combination of savoury taste, sweetness, spiciness, and appetising greasiness make up a distinctive meal that is surprisingly simple to make. Nasi goreng uses Indonesian palm sweet soy, white rice, and whatever ingredients they can think of or are conveniently available — vegetables, egg, chicken, sausage, mutton, stink bean, and many more. 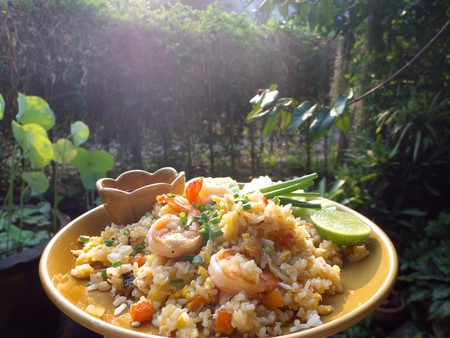 This thick beef stew originated from East Java, specifically Surabaya. Rawon’s strong flavour derives from black nuts called kluwak, mixed with turmeric, various herbs and spices, making the stew look black and intense, a suitable representation of its strong, luscious taste. Inside the stew are chops of beef, baby bean sprouts, an optional squeeze of lime, salted egg, and condiment, eaten with a plate-full of rice.

Some call gado-gado the Indonesian vegetable salad, which contains bean sprouts, long beans, spinach, potatoes, along with tofu and tempeh. The vegetables are boiled or steamed, glazed with succulent, sometimes spicy peanut sauce. Often served with compressed rice cakes, gado-gado can be quite a filling, vegetarian-friendly meal with a generous amount of nutrition. 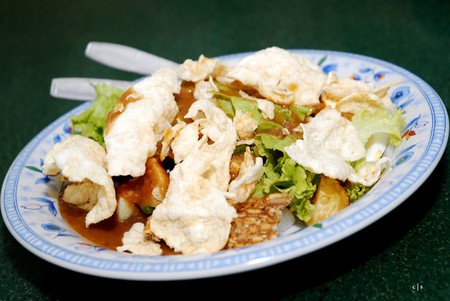 Originating from Palembang, South Sumatra, pempek is quite popular throughout the country, both as a snack or a dish in itself. Pempek is made from filleted fish and tapioca, making the texture deliciously chewy, and then presented in several variations in additional ingredients and shapes. The pieces of pempek are eaten with a special sweet-salty-sour sauce, noodles, and sliced cucumber. 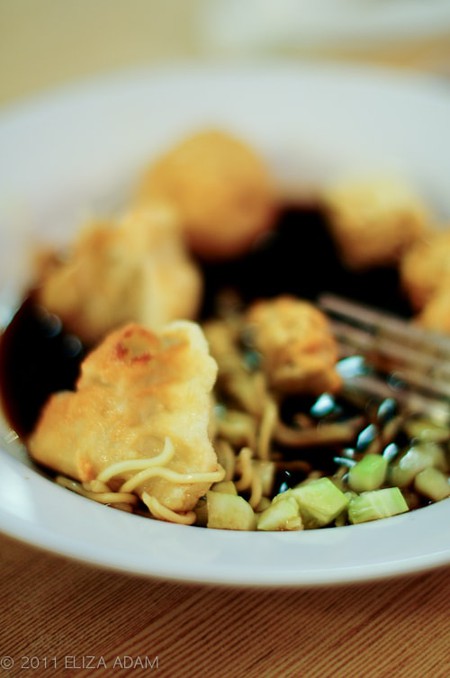 Literally means ‘sour soup’, this dish does have hints of acidity from tamarind. It contains vegetables like corn, long beans, chayote, and peanuts, soaked in the spice-rich broth. This soup usually serves as a side dish to a meat or fish meal.

The variations of satay in Indonesia is as diverse and plentiful as the cultures and ethnicities within. But basically, satay is skewered meat — chicken, mutton, beef, fish, pork, and basically anything — marinated in a special mixture of soy sauce and spices and then grilled on charcoal. The juicy skewers of satay are then topped with condiments such as peanut sauce or soy sauce with chopped chilli. 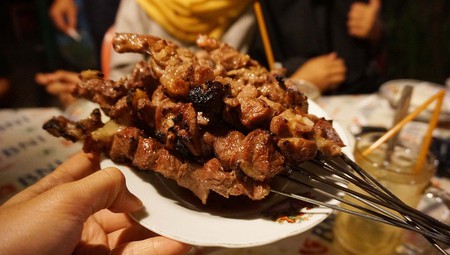 Sop Buntut or Indonesian oxtail soup is one of the most popular and lavish dishes in the archipelago. The tender, delectable chops of oxtail are simmered in a clear broth which conveys a salty, piquant taste. It also contains carrots and potatoes, served with rice, chilli, and crunchy melinjo crackers.

Rendang is one of Indonesia’s most popular and outstanding meals, originally a treat for special ceremonies in its place of origin Minangkabau. Nowadays, a mouthful of the fork-tender beef coated in special gravy sauce made with a delicate mixture of coconut and herbs can be enjoyed at Padang Restaurants, along with rice and various sauce and vegetables such as jackfruit or cassava leaves, accompanied by the famed green chilli condiment. 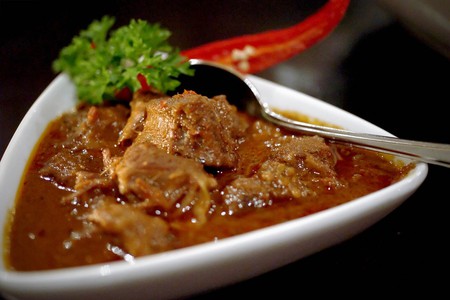 This fish or shrimp dumpling recipe has its roots in China, but not without its own unique revamp to suit the locals’ taste and customs. Siomay is often sold as an assortment that includes slices of tofu, potato, rolled cabbage, and hard-boiled egg, topped with peanut sauce, soy sauce, and a little chilli ketchup to taste. 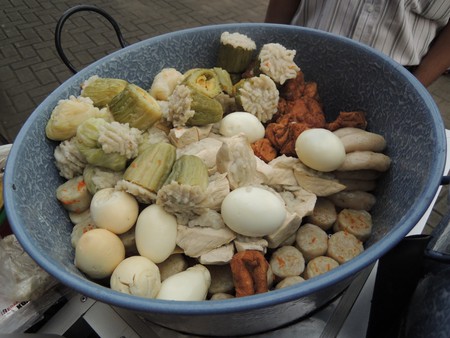 Bakso, or Indonesian meatballs, are mainly made from beef and tapioca that make them both juicy and bouncy. Balls of bakso are to be put together in a bowl with rice noodles, egg noodles, some vegetables (some even add friend wonton and other fritters), before pouring the warm, savoury broth. You can add optional seasonings like soy sauce, vinegar, or a spoonful of spicy Indonesian chilli condiment. 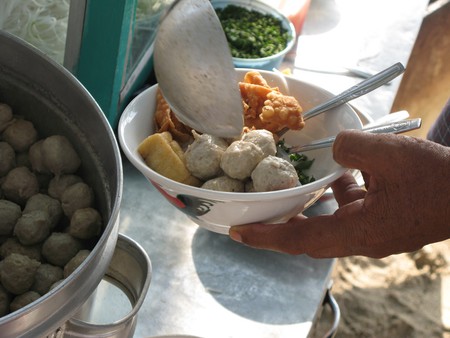 A popular and unique recipe from Yogyakarta, this dish is an unmissable traveling experience in itself when visiting the heritage city. It consists of steamed young jackfruit with coconut milk, palm sugar, lemongrass and other herbs that make the taste distinctively sweet and pleasantly aromatic. Gudeg can be eaten with rice and other side dishes such as meat and eggs.

This soy-based side dish is a nutritious and convenient protein source that has recently become popular among vegetarians around the world. Tempeh is basically fermented soybean cake that can be cooked however you want — deep-fried, pan-fried, grilled, or steamed. Tempeh can also be used as an additional ingredient for various recipes, including vegetables and soup recipes. 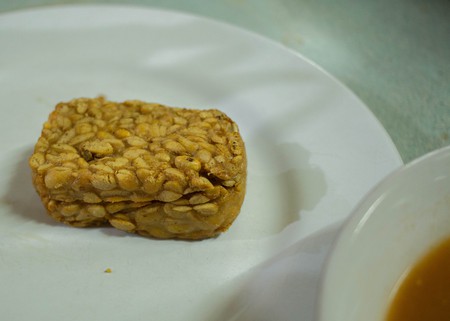 Nasi Uduk is made from white rice cooked with coconut milk and a mixture of herbs, making the flavour curiously aromatic and hearty. Nasi Uduk is a popular breakfast dish often sold with side dishes such as eggs, potato cakes, or fried rice noodle.

The Indonesian beef ribs soup has juicy, succulent meat in aromatic, flavourful broth that conveys a unique taste from the mixture of herbs and meat. Due to the long cooking process, you can easily scrape off the meat from the rib bones and enjoy its tender texture along with the luscious soup. 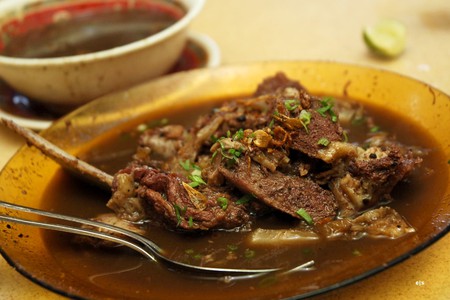 This popular Balinese dish is basically roasted pork seasoned with various herbs. Originally, this was a communal dish served during traditional performances and ceremonies. A special mixture of traditional herbs and spices are stuffed and greased all over the meat before it’s roasted whole, resulting in a thorough flavourful taste that makes the dish unforgettable. 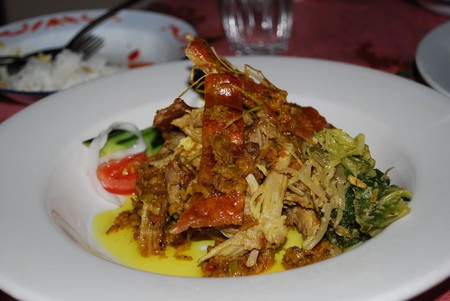 Different cultures in Indonesia have their own version of soto (traditional Indonesian broth), but Soto Betawi is one of the people’s favourites. Like many other variations of soto, this one contains beef meat and innards. What makes Soto Betawi different is the creamy broth made from coconut milk, cow’s milk, and other spices.

Another popular soto variant is the one that originated from Makassar, South Sulawesi. This dish has become the local pride of the region, claiming popularity throughout the archipelago. Coto Makassar has a dark and rather thick broth that tastes nutty and a little sour, with beef meat and innards inside. The long process of boiling evens the taste and makes the meat so tender and juicy in your mouth.

Originating from the Aceh region in Indonesia, this noodle dish is infamous for its strong and spicy taste, with thick broth that almost tastes like curry. It has an intricate mixture of spices that includes a lot of peppers, cumin, and other hot ingredients. The recipe usually uses thick and yellow noodle, served with various toppings from vegetables to mutton. 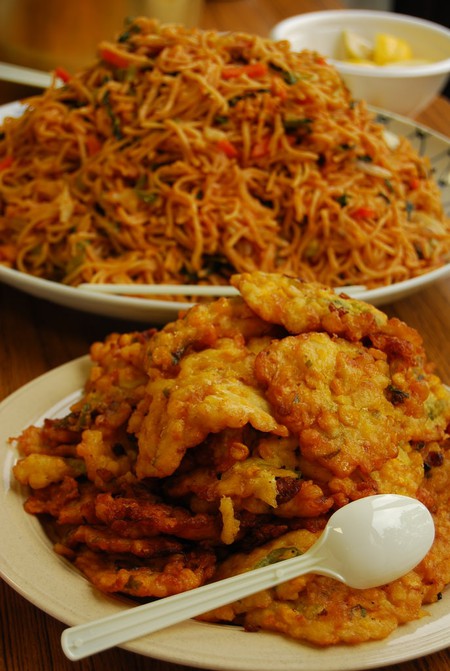 Indonesian chicken porridge is made from rice, and then seasoned with a savoury sauce. If you’re buying one from a street food cart, you’ll see how the porridge is prepared with various toppings like shredded chicken, soybeans, celery, and fried onions. This cheap, popular, and convenient breakfast dish is often sold with skewers of chicken innards.

Ayam Taliwang is a grilled chicken dish from Lombok. The recipe uses kampong spring chicken for a firmer texture, smeared with an abundance of chilli paste and a mix of seasoning then grilled or fried. The appearance and aroma of a freshly-grilled Ayam Taliwang is very appetising, but brace yourself, because it’s one of the spiciest dishes you’ll ever taste. 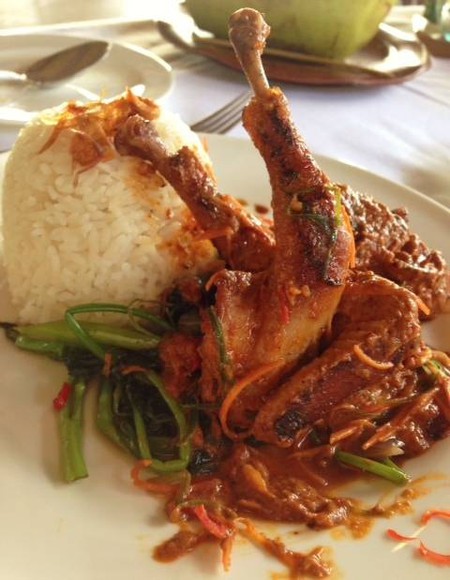 Woku is an impassioned dish from Sulawesi, Indonesia. Using the region’s rich spices and herbs, a seasoning sauce is fixed, and portions of fish or chicken are boiled with the yellow-ish sauce. The sauce has a uniquely spicy taste with fresh flavour from the herbs, not to mention the tender and savoury fish or chicken meat that convey the same crispness and electrifying flavour.