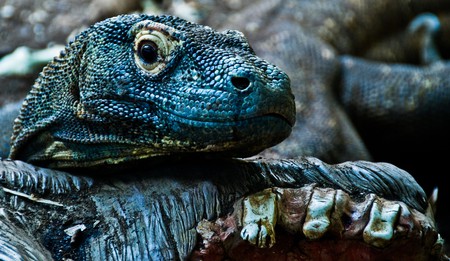 Once creatures that inspired myths and folklore, little was actually known about the world’s largest lizards: Indonesia’s Komodo dragons. Endemic to Komodo Island in East Nusa Tenggara, these ancient beasts have always instilled as much fear as they have scientific intrigue. It has only been in the recent past that we have dispelled certain myths and learned the truth about Komodo dragons. And, as it turns out, the truth is often stranger than any fiction we can come up with.

While their deadly and unique toxins had erroneously been attributed to their saliva, a 2009 study found that Komodo dragons excrete venom through ducts in their mouth into the wounds they have created in their preys’ flesh. Although their victims might get away, the venom slowly and painfully paralyzes and kills them over a day’s time at most. 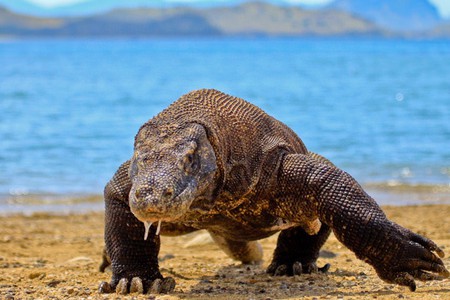 Their taste buds are so immaculately evolved that Komodo dragons can taste the air and differentiate between the particles left behind by different animals. While their eyesight and olfactory senses are quite poor, their split, forked tongues can track down their dying victims or carrion over distances of up to 9 km away.

Not only are they cannibalistic, but Komodos are known for eating their own offspring. After the eggs hatch, baby Komodos instinctively climb high up in any trees to avoid being eaten by their mothers or other nearby Komodos. They can remain up in the trees until they are four years old, when they return to the ground and can then live up to 30 years old. 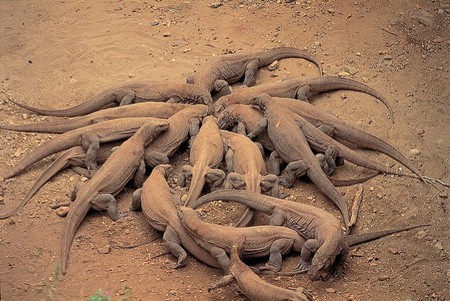 Another method for escaping cannibalistic adults, younger Komodos have been found to cover themselves in feces and the intestines of dead animals. As Komodos rely on their sense of taste and smell, it is an effective way to avoid being eaten.

As avid scavengers, Komodo dragons have been known to dig up human graves and feast on the rotting carcasses. In order to protect the deceased, locals cover the graves of their loved ones with rocks to avoid Komodo tomb raiders.

They can give virgin births

Komodos are parthenogenetic, meaning females are able to conceive without the aid of male sperm. Instead, their egg cells can fertilize each other, as has occurred with Komodo dragons living in captivity. Interestingly, however, Komodos can also reproduce sexually. Whether they choose to reproduce sexually or asexually depends on the conditions of their environment. 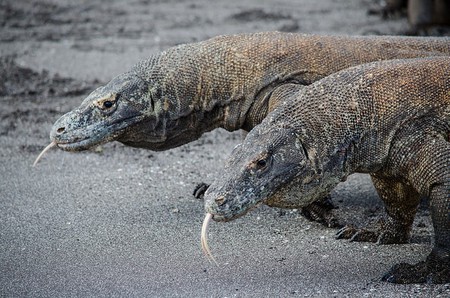 Two at once | @Benjamin Hollis/Flickr

With a massive appetite for meat, Komodos are entirely carnivorous and can eat up to 80% of their bodyweight. They have been recorded swallowing entire goats in one sitting, ramming the carcass up against a tree to aid in swallowing their food. Despite their size and appetite, however, the metabolism of Komodo dragons is very slow. This allows them to subsist on as little as 12 meals per year, albeit quite large meals at that.

Today, they are the largest lizards still in existence. The largest Komodo ever recorded was over 3 meters (10 feet) long and weighed 166 kg (366 lb). On average, however, these giants measure at around 6 feet (1.8 meters) for females and 8 to 9 feet ( 2.4 to 2.7 meters) for males. Their massive size is attributed to them being the apex predator around the islands in which they inhabit and, therefore, having no predators of their own to contend with. 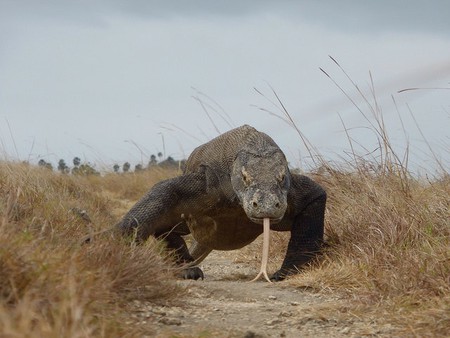 Not only can they climb and run rather fast (almost as fast as humans), Komodos have also added the ability to swim to their predatory repertoire. While in search of food or partners, Komodos can easily swim around the islands of East Nusa Tenggara, mainly those of Komodo, Flores, Rinca, Padar, and Gili Motang.

They have been around a very long time. Though only discovered by Europeans in 1910, Komodos are considered a relict of giant lizards that have existed in Flores for at least 900,000 years. And fossils similar to Komodo dragons have been dated 3.8 million years old.

Komodos can also be playful

In the Smithsonian National Zoological Park in Washington D.C., an adult Komodo known as Kraken began showing signs of playfulness with various objects as well as with its caretakers. Kraken showed clear signs of interest, curiosity, and play without any aggression or motivation for food, playing tug-of-war and with objects such as shoelaces, Frisbees, boxes, and blankets.

Whether it is myth or fact, these ancient beasts have thoroughly deserved their reputation as real-life dragons. With further studies, who knows what else we will learn from the Komodo? 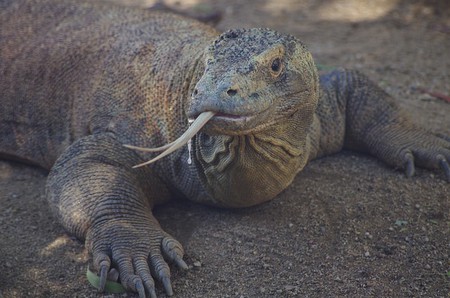 Komodo Dragon | @ NAPARAZZI/Flickr
Give us feedback