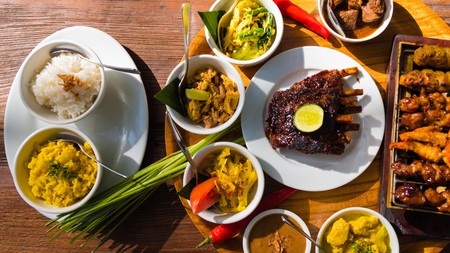 The traditional dishes of Bali are a huge part of the tradition here in Indonesia; some are almost as old as the culture itself. Here’s what to try in Bali if you want to experience the essence of the island on your plate.

Want to learn how to make delicious Balinese delicacies for yourself? You can enjoy a cooking masterclass in Ubud as part of Culture Trip’s immersive 12-day Bali adventure.

Satay, or sate in Indonesian, are grilled slices of chicken, goat, beef or pork, skewered on sticks. You can find them in virtually every city in Indonesia; every culture has a unique take and variation. Sate lilit is Bali’s creation, which is marinated in coconut milk and other spices. The sliced meat is wrapped rather than skewered, hence the name lilit (wrap). Additional sauce is optional, as the sate itself already has a combination of spicy, savoury and sweet tastes. 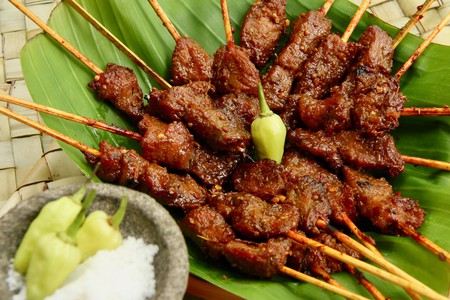 Babi guling (Balinese-roasted pork) is a treat often served during cultural performances or ceremonies. While the fresh pork contributes to the juiciness, the mix of traditional spices plays an important role in making babi guling an unforgettable dish.

Legend has it that betutu was once the king’s favourite meal. It’s not surprising, then, that the food is prepared in such a sophisticated way. A whole chicken or duck is often chosen as the main ingredient, which is then stuffed with an intricate mixture of spices, including shallots, garlic, ginger, chilli, peanuts and more. The meal takes at least eight hours to prepare. The taste is worth it, though, because that long process yields a rich flavour in every bite. 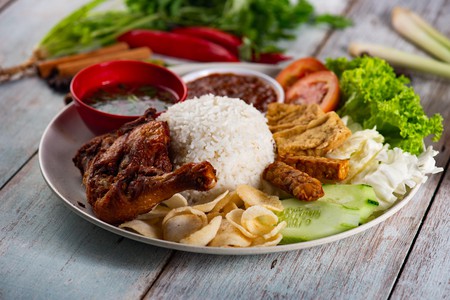 Lawar is made by mixing chopped meat with various green vegetables and grated coconut. As for the meat, the choices are beef, chicken, duck, pork, turtle or a combination of those. Balinese know two types of lawar: red and white. The red gets its colour from animal blood added to the mixture, which adds a certain savoury flavour. White lawar, on the other hand, doesn’t contain blood and often substitutes meat with jackfruit. 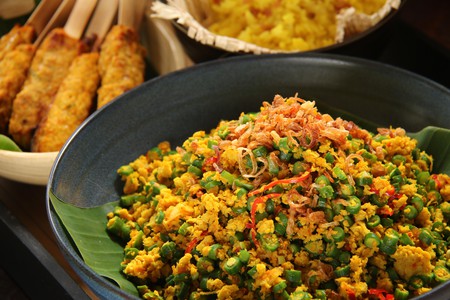 Bubur mengguh is a kind of porridge that originated in Buleleng. This savoury dish is an important meal for Balinese people as it’s one of the compulsory treats served at traditional festivals or ceremonies. The porridge is topped with a liquid mixture made from spices, shredded chicken, roasted peanuts and celery. Often, bubur mengguh is served with urab, a vegetable salad with coconut dressing. Warm, freshly cooked bubur mengguh is perfect for breakfast.

Although it comes in small portions, nasi jinggo is a big part of local daily life. Consisting of rice, vegetables and a side dish and condiment wrapped together inside a banana leaf, nasi jinggo is an affordable food. Usually, the side dish options are shredded chicken, egg or noodles. You can buy nasi jinggo from motorcycles parked on the side of main streets. 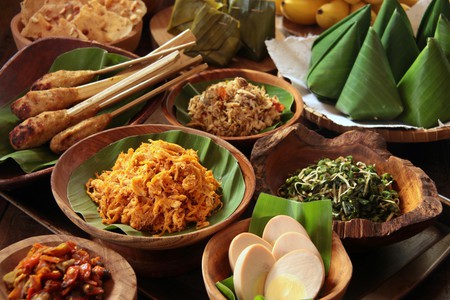 Nasi tepeng is the local cuisine of Gianyar. Its texture is somewhere between rice and porridge. The soft, mushy grain is enjoyed with a special mixture of spices and herbs, which gives a strong flavour, along with fried chicken, egg, jackfruit, beans and eggplant. In Gianyar, nasi tepeng is a common breakfast; smelling that enticing aroma in the morning is a treat in itself.

Urab (also known as urap) is a traditional vegetable salad with coconut dressing. It has a wide array of steamed or raw vegetables, including green beans, cabbage, bean sprouts, spinach and cassava leaves. You can enjoy urab on its own or as a side dish, rich in both flavour and nutrients. 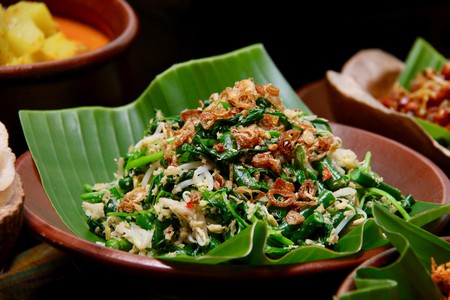 Tum consists of minced chicken or beef, put together with mashed spices and herbs such as garlic, shallots, chillis, bay leaves, gingers, lemongrass and more. Everything is arranged compactly in a banana leaf, making it convenient to eat as a main course or snack on the go.

This tasty Balinese hot sauce has made its way to restaurants and households all over Indonesia. Each culture has a unique take on the chilli-based condiment, but sambal matah is loved for its fresh sensation. Shallots, garlic and chillis are chopped or blended, giving it a delightful texture. The secret is the touch of lime leaves and lemongrass. Sambal matah can enhance the flavour of a simple fried chicken, pork or egg dish. 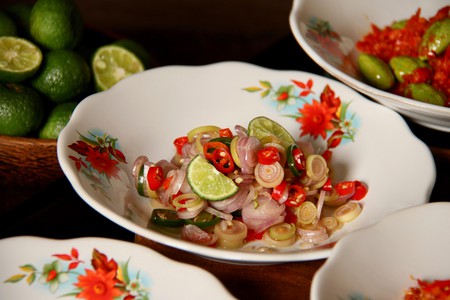