Barkas is a neighborhood with a rich history tucked miles away from the present city center of Hyderabad in Telangana. The common legend is that name ‘Barkas’ is derived from ‘barracks,’ a makeshift arrangement for soldiers on the move. However, the people of Barkas, hardy, warm and always willing to share a story over a cup of Suleimani chai, prove that their stories and culture have come to stay. 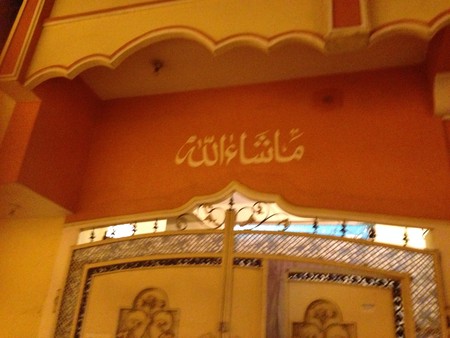 Barkas, at first sight, seems like any other neighborhood in the city. However, certain signs — complex and weaving into an unmistakeable sense of difference — begin to flash often, winking in the eyes of the stranger. The checked lungis, always in hints of blue, coupled with the long off-white kurtas, the signs written in Arabic on shopfronts, the houses closely nudging gates and the distinct aroma of food and spices standout in the streets.

Barkas is around four kilometers away from Charminar, as the crow flies. However, the history of its inhabitants and the economic, political and religious nature of its people’s migration spans the width of the Indian Ocean. According to Leif Manger in his book The Hadrami Diaspora, the early Hadrami migrants from South Yemen (Hadramaut) left home in the late 18th and early 19th century due to drought and tribal wars and settled along South East Asia, India and parts of Africa along the Red Sea. Hadramaut, forming a portion of present-day Yemen, has two main zones: the coastline consisting of Mukalla and Shihr and Wadi Hadramaut (valleys).

The term ‘Hadrami’ comes into being in the numerous ways that these individuals, located in different contexts, come together to identify themselves as the descendants. They are settled in various cities in the south including Mumbai, Aurangabad in Maharashtra, Cochin and the Malabar Coast in Kerala, along with Barkas and King Koti in Hyderabad.

In Hyderabad, men from Hadrami families were soldiers, mercenaries and sometimes occupied high positions in the Nizam’s army. By the early 20th century, they had developed formidable reputations as bodyguards, loyal to the Nizam. They were also religious teachers and businessmen, willing to adapt to the nature of new tasks. It is believed that the Qu’ayti and the Kathiri Sultanates of Yemen were run on the contributions of those based in Hyderabad.

The Hadrami hospitality is legendary; they welcome guests with a cup of hot qahwah (with salt), or Arabian coffee, served with the famous Saudi dates or figs — no guest is allowed to leave without having tasted either. Many Hyderabadis travel to Barkas in the morning for harees, which comes in both sweet and savory versions. 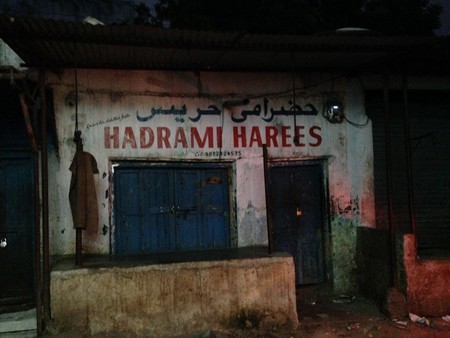 The Hadramis were implicated in Hyderabad’s accession to the Indian Union; the nature of the decision rested on religious among other concerns, and the Hadramis, apart from being Muslims, were also Arab with memories of their imaginary homeland. While many of them chose to go back to Hadramaut, some decided they were ‘Mulki’ and stayed back. In the wake of independence, national identities that were forged seemed to suggest leaving behind particularities in favor of blind assimilation. The Hadramis managed the fine balance between their multiple claims to identity.

Barkas Bazar is a hub of activity — narrow lanes flanked by shops selling harees, meat, chai and designer burkhas. A high-raised cemented pavement accompanies the shops in front, where men, young and old, gather, sit and swap stories. Walking through the streets invites smiles and waves. The elders of the community seated at the popular tea stall in Barkas Bazar smile curiously at those visitors attempting to soak in their culture.

AIMIM’s Akbaruddin Owaisi was elected from the Chandrayangutta constituency four times, with the most recent time being in 2014. Majlis’s role in Hyderabad politics has been significant since the mid-20th century. The local representatives of AIMIM are proud of the Barkas youth who have reached positions of great power (also purportedly in Obama’s core team) with Ph.Ds, as pilots, advocates, sportsmen and businessmen in Gulf countries. Since the labor demand in the oil-rich countries exploded in the 70s, many have moved and unwittingly created links of origin and livelihood.

They also prize their hard-working simplicity and enterprise; one of the residents mentioned how the early settlers built simple ‘mud houses’ in the style they were familiar with, those from Yemen. Houses, with fronts inscribed in Arabic, stand in shades of bright blue and beige.

Since the Hadramis in Hyderabad have been associated with the Nizam’s battalions, the element of physical training, martial art and sports was essential to their drill. This culture has led, in contemporary times, to proficient sports people who have played in the Afro-Asian games and the Olympics. Urdu and Arabic are among the main languages within the community. The madrasas set up for the teaching of these languages and cultures in Barkas rank amongst the top in the country.

The main road that leads to Barkas Bazar forks into the Mosque lane. It stands silhouetted in tones of halo green and yellow, the muezzin’s call piercing through the air. The men greet each other with hugs on Bakrid, smiling in recognition. The crowds weave into each other as the call to congregate rings through the evening.