Why You Shouldn't Have Missed Jaipur Literature Festival '16

Last weekend saw the curtains come down on the latest and ninth season of the Jaipur Literature Festival. And while those who attended the fest came back armed with memories, experiences and tales to tell, many couldn’t make it yet again. Why not? Assuming that some people need a push and a nudge to to decide to attend this literature festival, every lover of literature must attend. Held at Diggi Palace, Jaipur, the five-day event is the world’s largest free literature festival. For five days, the entire expanse of the place witnesses a meeting of books, their authors, readers and experts. The festival directors are William Dalrymple and Namita Gokhale, both writers. Here is what you could have witnessed had you attended the festival. 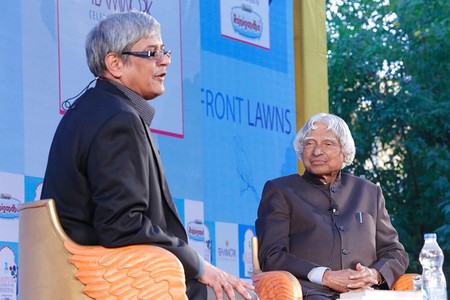 Amongst the big names and star attractions at the festival were Margaret Atwood, Stephen Fry and Ruskin Bond. Fans and readers had thronged the event in large numbers to hear their favorite authors speak and grab a chance to interact with them, as expected.

Bollywood and literature have a close connection. Lyricists, film-makers, socialites and actors – a lot of Bollywood is known to be closely connected to literature. Present at the Jaipur Literature Festival were Gulzar, Javed Akhtar, Karan Johar, and Kajol, amongst others. Johar was supposed to launch his biography, An Unsuitable Boy, at the festival while in conversation with Poonam Saxena. 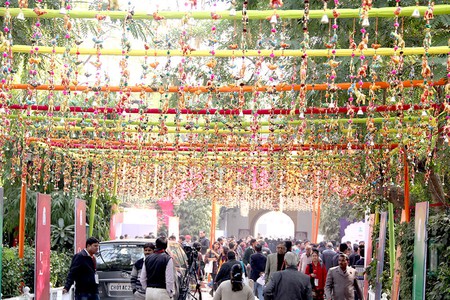 Diggi Palace grounds all decked up for the Jaipur Literature Festival | © jaipurliteraturefestival.org

If your taste is a little different, this might interest you. Present at the festival was Dalit activist and writer Bant Singh who dragged a group of landlords to the court for having raped his daughter. He spoke against oppression of the community, and as expected, his talk was well attended considering the fame of his accomplishments along with the fact that this is a burning issue in the country at the moment. At the festival, Singh spoke about his biography Ballad of Bant: A Qissa of Courage written by Nirupama Dutt.

Author Roopa Pai, who spoke about her book Bhagvad Gita for Children, confessed that most of her readers were adults! When Marlon James spoke, he kept his audience enthralled. James said that before he became a writer, he used to be a church exorcist. And those who attended the talk by everyone’s favorite Ruskin Bond went away delighted. When a young girl asked him for a book recommendation that would help her career, he suggested Little Women by Louisa May Alcott. There were a lot of students and young people at the events, which pleased the authors greatly. At an age when reading is diminishing, children taking interest in literature is always a pleasant sight. At the poetry session, a chair was left empty as a mark of respect for imprisoned Palestinian poet Ashraf Fayadh.

Also on the the agenda this year was the promotion and focus on regional literature as well as translations. India is a land of multiple languages and innumerable great works of literature. Reading English literature is more common, hence, translated works have also picked up in sales and readership. The festival planned to focus on regional authors, their books as well as translations of their books. Alka Saraogi, Uday Prakash, and others were speakers at the festival.

Jaipur Literature Festival is not only about books and authors but also music. Visitors got to witness, enjoy and soak in classical, Sufi and folk music on the lawns of the Diggi Palace. Jazz artist George Brook jammed with the Jaisalmer Boys, Chugge Khan and Nathoo Solanki. Yes, you missesd that too! Visitors also got the opportunity to witness Swarathma, Medieval Pandits and Karsh Kale Collective perform at the festival.

Are you tempted enough? You have eleven months to plan. Freeze the dates and plan ahead. Register once the registration process begins later in the year, book your hotel and buy your travel tickets. Don’t miss this experience in 2017!

Samarpita Mukherjee Sharma is an economics major and an ex-journalist, now a full time freelance writer/editor. She owns Cover To Cover Writing Studio where she writes and edits for authors, businesses, brands, government departments and publishing houses. You can get in touch with her at www.samarpita.in. Samarpita loves to read, paint and travel. She lives in Bhopal, India with her husband.