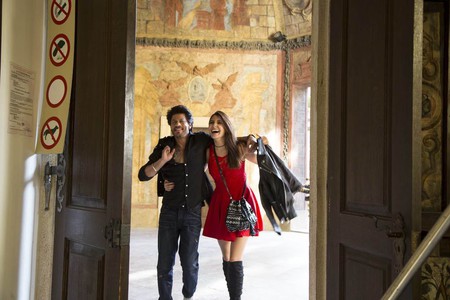 Bollywood flick “Jab Harry Met Sejal” has already hit the theatres across India and overseas, and the Netizens just can’t seem to get over it (pun intended). Audiences and critics have reviewed the movie and it’s an outright THUMBS DOWN. With not-so-great box office collections and scathing reviews, it might be one of the Bollywood’s biggest mistakes this year!

Helmed by Imitaz Ali, it is a story about Sejal Zhaveri (played by Anushka Sharma) who, while travelling Europe (through six cities – Amsterdam, Prague, Budapest, Vienna, Lisbon and Frankfurt) in search of her lost engagement ring finds love with the tourist guide, named ‘Harry’ (played by Shah Rukh Khan).

With the ‘Romance King of Bollywood’, Shah Rukh Khan featured in the movie, it was assumed it would become a super duper hit that could easily garner INR 100 CR (USD 15.03 million). On the contrary, it bombed on the very first day. Costing approx INR 80 CR (USD 12.02 million), the film raked in just INR 15.25 CR (USD 2.29 million) on the first day’s collection, making it one of Shah Rukh Khan’s lowest opening day box office collections in recent years.

From its announcement to its release, all eyes were on this movie. But it has received mixed reactions from viewers. While a few appreciated the movie, it failed to impress many.

Here’s how the Twitterati reacted to the film:

And, this one is a spot-on reaction!

Our group reaction in the interval 😅 pic.twitter.com/7tFxm7DeWD

The viewers lost time and money!

And, the audience searched for a logical PLOT!

Ah, JHMS was so moving, indeed!

Heard, Multiplexes are hiring bouncers to wake up ppl who enter cinema halls to watch Jab Harry Met Sejal but don't come out after it's over

Finally, the audience made an EXIT halfway through the movie! Phew!

TOTALLY DISSAPOINTING
1st Half Good, 2nd Half soo bad that ur bound to leave theatre@iamsrk @AnushkaSharma

Now that’s what you call a prompt verdict!