A street art festival in New Delhi | © meenakshi madhavan/Flickr
Street art is a concept that’s slowly but steadily developing in Delhi. A few organizations, like St+Art India Foundation, have been tirelessly working towards promoting this art form across the country and they deserve a lot of appreciation for their efforts. If you’re in the capital city and want to go on a street art trail, here’s a helpful guide for you.

Building
The life-size mural of Mahatma Gandhi at the Delhi Police Headquarters also happens to be the tallest mural in India. The remarkable work in monochrome is the creation of German artist Hendrik Beikirch, who was aided by Indian painter Anpu Varkey. However, the grand street art in the capital is set to be dethroned from its top position, as plans about painting a 230-feet mural of Bollywood legend Amitabh Bachchan in Mumbai were revealed late last year.
More Info
Open In Google Maps
Indraprashta Marg, IP Estate New Delhi, Delhi, 110095, India
View menu
Visit website
Visit Facebook page
Send an Email
Give us feedback

Hauz Khas Village is mostly renowned for it’s bustling nightlife. Some of the most popular bars, cafés, and restaurants in Delhi are all jostling for space here. To make your bar hopping at Hauz Khas Village even more exciting, the walls of many buildings in this neighborhood have been adorned with eye-catching paintings by Delhi’s local street artists.

Market
Lodhi Colony plays host to India’s first open-air public art district, all thanks to the amazing work that St+art India Foundation has put up around this upscale part of the city. St+Art India is an organization set up in 2014 that works towards transforming public spaces into creative canvases. Both homegrown and international artists have come together to give Lodhi Colony a vivid makeover and a walk along the neighborhood is quite inspiring.
More Info
Open In Google Maps
Delhi, India
View menu
Visit website
Visit Facebook page
Send an Email
Give us feedback

Shop
Shahpur Jat is an urban village in Delhi and is probably the hippest area in the city at the moment. It was the cheap rentals which initially attracted small businesses and upcoming designers to Shahpur Jat. Now independent boutiques, quirky home décor stores, concept restaurants, and many retail start-ups have all found homes here. Many people also visit the place for its vibrant street art. The buildings in the area are mostly antiquated, which makes the murals on them even more attractive.
More Info
Open In Google Maps
Shahpur Jat, Siri Fort New Delhi, Delhi, 110049, India
View menu
Visit website
Visit Facebook page
Send an Email
Give us feedback

Agrasen ki Baoli is a historic step well located near Connaught Place. There are no official records to confirm the date when the structure was built, but it is said to have received its first renovation in the 14th century. Just outside Agrasen ki Baoli, there’s a stretch of wall, now famous for its dramatic street art. It has almost become customary to take a picture in front of the painting whenever someone visits this monument.

The shopping district of Connaught Place is already well-known for its unique architecture containing white facades and tall Georgian columns. The striking street arts decorating many of its walls have now added even more spirit to the place. Among these, a group of paintings showcasing the theme of women’s empowerment are particularly captivating.

Bazaar, Market
Adjoining Connaught Place is a popular bazaar called Shankar Market, where you can buy fabrics of all kinds at very reasonable prices. Delhi Street Art, another organization promoting street art in the capital, has provided a dazzling facelift to the otherwise drab walls of this market with paintings that are colorful, quirky, and fun.
More Info
Open In Google Maps
Shankar Market, New Delhi, Delhi, 110001, India
View menu
Visit website
Visit Facebook page
Send an Email
Give us feedback

Khirki is a residential colony in south Delhi and it came to life for three long weeks in 2012, when it played host to Extension Khrikee, a street art festival organized by creative professionals from all walks of life. This revived the lackluster walls of the colony with graphic murals but more importantly, the festival gave rise to a street art movement the city hadn’t witnessed before. 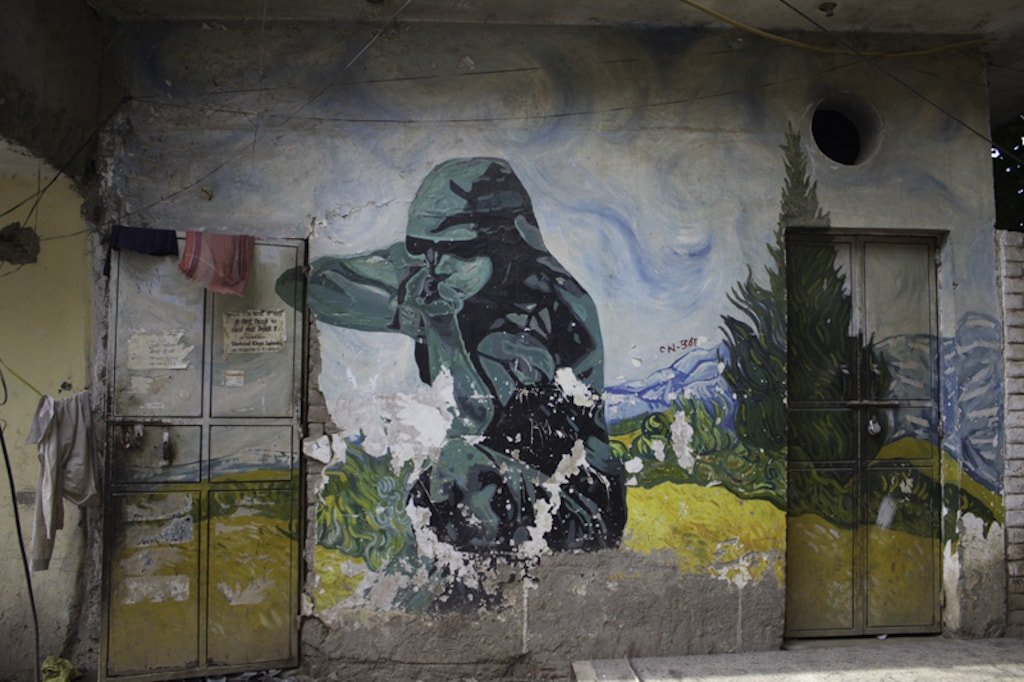 Train Station, Building
One of St+art India Foundation’s many initiatives in the city was to revamp the walls of Arjan Garh metro station and artists from Singapore flew all the way to Delhi especially for this special project. Before the station was built, a forest area stood in its place and as an ode to that, artists filled the facade with their rendition of birds and animals found in India. The result is absolutely stunning.
More Info
Open In Google Maps
Aya Nagar, Aya Nagar New Delhi, Delhi, 110047, India
View menu
Visit website
Visit Facebook page
Send an Email
Give us feedback
Give us feedback