What Is India's Onam Festival?

With Onam 2016 just around the corner, on September 14th, Kerala has dived headfirst into intense celebrations. From traditional dance and song rituals to the 20-dish-strong feast, here’s a guide to everything you need to watch out for.

Onam, though essentially a harvest festival, commemorates the annual visit of mythical king Mahabali who is considered to have ruled ancient Kerala. Keralites consider their state to have experienced its golden age during his rule. Without class, caste, or religious divides, a prosperous agrarian culture and almost no poverty, Mahabali’s kingdom signifies Kerala at its best. The decorations, festivities, and indulgences are the state’s residents’ way of showing their prosperity and happiness to their celebrated king.

The ten day celebrations start with Atham (day 1) and end with the most important day of Thiruvonam. Each of the days hold significance and mark a certain stage of Mahabali’s journey to Kerala. While it is common for all ten days to be observed as holidays, only four days are declared state holidays.

Perhaps the most iconic tradition associated with Onam is that of creating pookalams, or floral-like arrangements in various designs laid on the floor. Flowers ranging from locally available marigold to others sourced from neighboring states are plucked and arranged in various shapes. While they are created over the course of ten days in some households, they’re created only during the last two days of Onam in others. Pookalam-making competitions are common, and a very spirited affair. 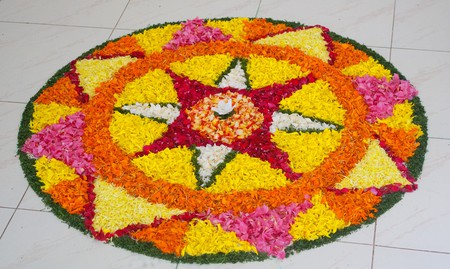 Among other traditions associated with Onam are the various boat races known as vallam kali, which are held in Kerala’s many water bodies. Boats ranging from the iconic snake boat to canoes and paddled long boats are used for these races. Of all these, the snake boat or chundan vallam race at Alappuzha, known as the Nehru Trophy Boat Race, is particularly popular. These 100-12-foot-long vessels are the biggest water vessel to be used for sports purposes, and they traverse a 1.4-kilometer-long course to win the coveted trophy.

Much like other festivals in the country, Onam is also celebrated with song and dance. The traditional Thirvathira kali, where groups of women perform in a circle in accompaniment to various folk songs, is particularly popular. More striking but perhaps less graceful is the puli kali (tiger dance) wherein artists painted like tigers or leopards dance through the streets to the beat of traditional instruments. Usually wearing masks, the dancers mimic tigers as they get cheered on by crowds. 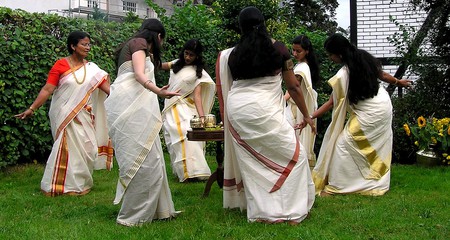 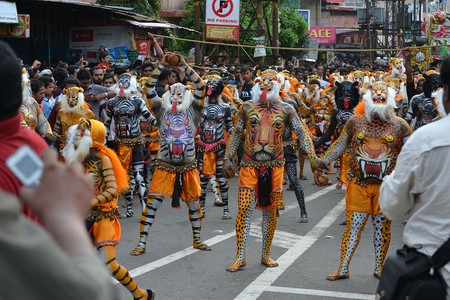 No celebration is complete without indulgent feasts, and this holds true for Onam as well. A variety of culinary rituals revolve around the ten days of celebrations, and these may vary from house to house. However, pretty much all of the state will be having the traditional Onasadhya or Onam sadhya (feast). This extravagant, usually vegetarian feast is comprised of 20 to 30 dishes served on a traditional banana leaf and is one of the most central parts of Onam. With rice as the main dish, the feast includes a variety of lentil and vegetable preparations with plenty of coconut (which the state has in abundance). 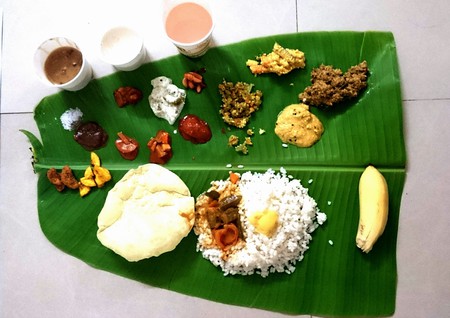 ©Ramesh NG/Flickr
Give us feedback