Visit the World’s Largest River Island before It Disappears 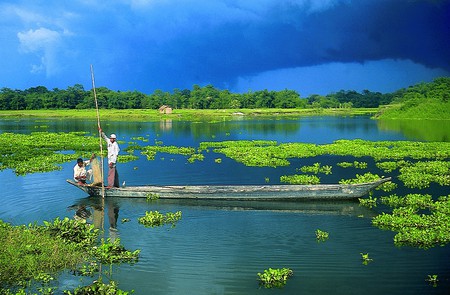 Declared the world’s largest river island by the Guinness World Records, the Majuli Island – in the north-eastern Indian state of Assam – is the epitome of scenic beauty. Aside from picturesque landscapes, lush greenery, and a diversity of flora and fauna, one of the great allures of the Majuli Island is its vibrant culture and warm tribal inhabitants. Yet this river island is in danger due to floods and massive soil erosions. It is literally submerging, and some experts believe that by 2030, the island would be completely engulfed in water. So, pack your bags and visit this beauty before the environment eats up the gorgeous haven.

Meaning ‘the land between two parallel rivers’, the Majuli Island is formed by the confluence of the Brahmaputra River and its anabranches. It is India’s first river island district and the biggest river island in the world, but due to the frequent path changes of the mighty Brahmaputra river, combined with earthquakes, floods, and massive soil erosion, this river island that was once 1,250km² in size has now shrunk to a mere 352km². 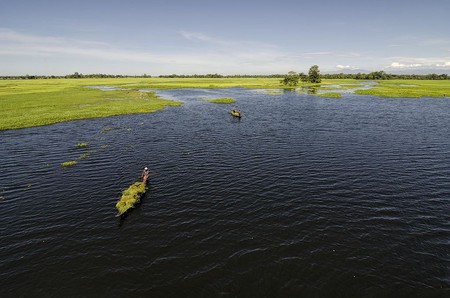 The people of Majuli

With a population of more than 150,000, the inhabitants of the island are mainly tribals from different communities, including Mishing tribe, the Sonowal, the Kacharis, the Deoris, and the Ahoms. The Majuli people are warm and welcoming, and often invite tourists into their homes for a plate of purang apin (a traditional dish of rice wrapped in special leaves) along with a mug of apong (rice beer). 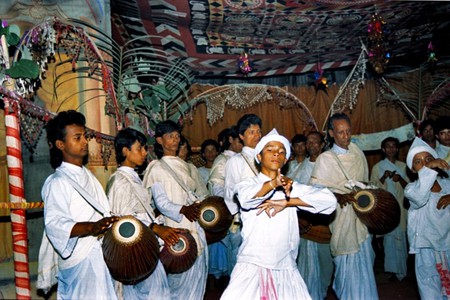 The homes on this river island are made of bamboo, which stand on stilts at a height of half a metre off the ground.

The major source of livelihood for this island is agriculture, with over 100 different types of paddy grown here. Fishing, dairy farming, pottery, boat-making, tribal face masks, cotton and silk weaving are other sources of their income. Fabrics with beautiful and intricate designs are the speciality here, and the notable thing is that they are made using traditional techniques used in the era of the Harappa civilisation. 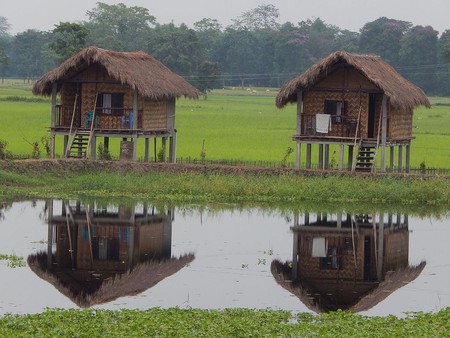 The culture of Majuli

The Majuli Island is known as the ‘Cultural Capital of Assam’, and rightly so. This island has a vibrant cultural scene with atmospheric festivals, for instance the ‘Raas Leela’ festival held in mid-November, which lasts for three days. This festival portrays the life of Lord Krishna through dance performances and drama – quite a spectacle, indeed. 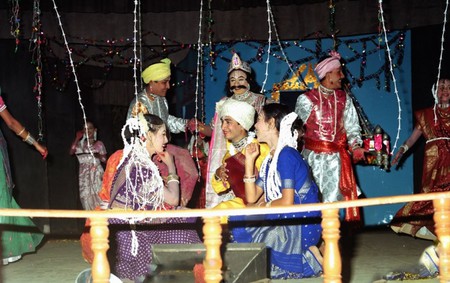 Another main festival is the Ali-ai-Ligang, which is a spring festival and marks the onset of the paddy sowing season. Folk dance of Mishing tribe, known as ‘Gumrag’, is performed on this festival as a way of showing reverence for Donyi-Polo (the god Sun-Moon). 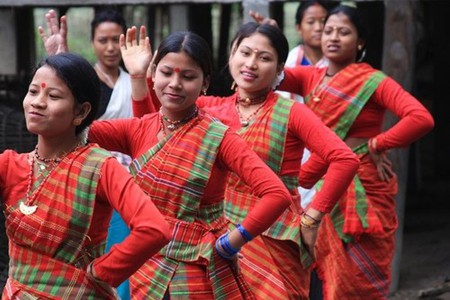 The Majuli Island is an idyllic haven for peace and quiet. Hire a bike and take a ride along the rice paddies and the scenic villages, and watch a typical day on the river island unfold. The best time to visit is between October and December.

Majuli Island has been an ancient seat of Assamese neo-Vaishnavite monastery, or first Satra. The roots of neo-Vaishnavism culture in Majuli goes back to the 15th century and there are about 22 Satras on this island that provide a glimpse of the culture that prevails in the village through arts, crafts, artefacts, weapons, and literature. Of all the places to visit on your trip to Majuli, exploring the Satras is an incredible experience – a cultural delight.

Some of the Satras worth-visiting include:

The most popular Satra and a hub for local arts, crafts, culture, classical studies, and literature. 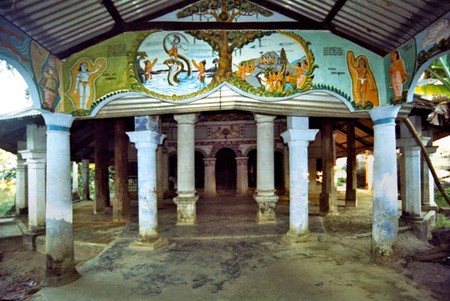 Adorned with religious motifs, animal forms, paintings and sculptures, people from far and wide visit this Satra for spirituality and peace, and also to witness the grand festival of Raasleela held on the full-moon night. 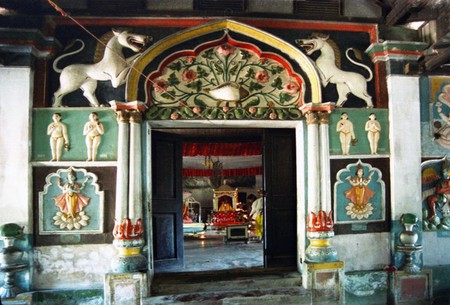 Considered to be the hub of Vaishnavism culture, this Satra was built by Ahom King and is the oldest of them all. Lord Krishna is worshipped in this Satra, and satriaya song and dance performances are held here, which is in fact its main attraction. It also houses a museum that features a beautiful collection of authentic Assamese handicrafts, ancient utensils, jewellery, and antiques.

This Satra is famous all over India for its mask making. Bamboo, along with paper, and cow dung are used to prepare masks, which are then used in the dramas and cultural performances held across the state.

Relax amid greenery at Tengapania

Nestled on the banks of the river Brahmaputra, Tengapania is a picnic spot where you can relax and enjoy nature, away from the chaos of city life. The popular feature of this spot is the golden temple structure built in the Ahom architectural style.

For an authentic experience, indulge in the local village activities – for instance farming, exploring the vast swathes of rice paddies, weaving and hand-pottery, and fishing are among the many things to do on this river island. The villagers are more than happy to welcome tourists. Take handmade products, such as tribal masks and pottery, back home as souvenirs. 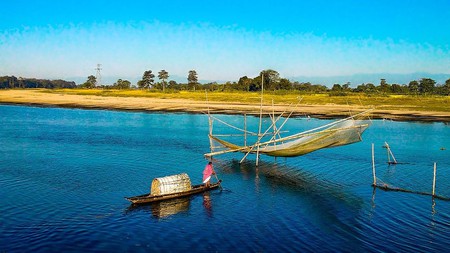 Majuli Island is often referred to as the ‘bird lover’s paradise’, and is known for its diversity of flora and fauna. Spot migratory birds, like the greater racket-tailed drongo, whistling ducks, Siberian cranes, brown shrikes, jungle nightjars, white-backed vultures, red munias, short-toed snake eagle, and pheasant-tailed jacanas, to name a few. Combine birdwatching with a boat ride to get the most out of your trip. The amiable locals conduct birdwatching tours to the wetlands (beels) for bird and nature lovers. November to March is the best time to visit this spot. 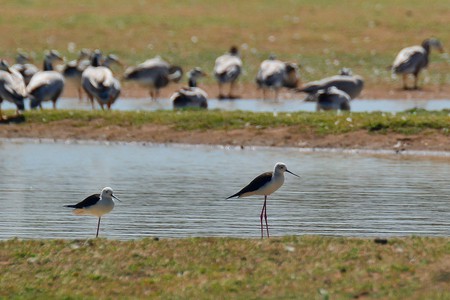 Watch the sunrise and sunset on the riverbank

This largest haven is an absolute delight for watching sunrise and sunset – truly a photographer’s paradise. 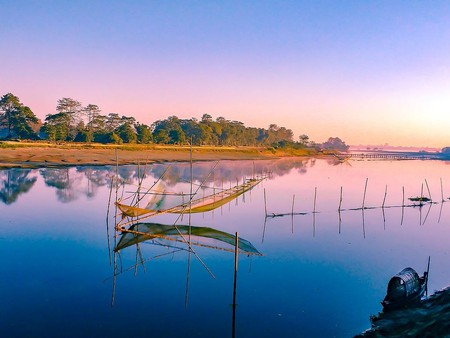 Homestay options are available, but bamboo cottages and several government-run hotels also operate in the region. One of the best stay options is La Maison de Anand (The House of Happiness) that is made entirely out of bamboo and offers an authentic experience and rustic feel.

Other options include the Prashaanti Ecotourism resort, Mepo Okum, and Ygdrasill Bamboo cottage. All these accommodations are comfortable, affordable, and provide local cuisine.

Majuli Island can be reached by ferry. Two ferries run between Jorhat in Assam and Majuli Island – one at 10am and another one at 3pm. Visitors can arrive at the Guwahati International Airport, around seven hours drive from Jorhat, and from Jorhat take a ferry ride to Majuli Island. 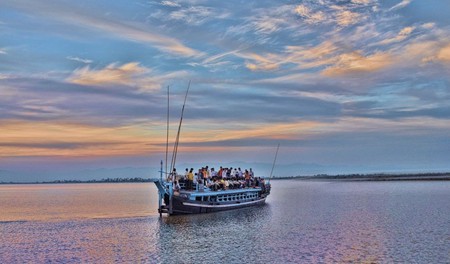