Traditional Indian Designs Women Are Wearing in Mumbai this Year 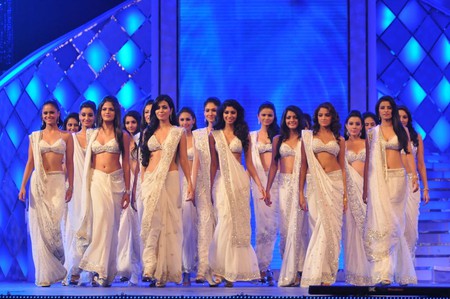 In India, traditional wear is always in vogue. From the centuries old sari that remains just as relevant today in every Indian woman’s wardrobe to the staple kurta, which Indians wear on everything from a trip to the grocery store to Diwali celebrations, traditional clothing is fundamental in Indian fashion. So far this year, fashion trends further prove this point.

While a decade ago, most urban Indian fashion-lovers, including Mumbaikars, saved traditional wear for festivals, weddings and other special occasions, this is no longer the case. Traditional wear with the right modifications is fashionable daily wear today.

One of the most noticeable shifts in Indian women’s traditional wear in recent times has been the move away from red and maroon. While 2015 and 2016 saw a dramatic surge of traditional wear in fun, pop colours, 2017 has mostly been a celebration of pastel shades. From beige lehengas (long skirts) to pastel pink saris, this year’s ethnic wear fashion is simpler, downplayed yet undeniably chic.

“Emily Dickinson inspires me to do dusty florals. Almost like fading chinoiserie in a forlorn mansion. Melancholic, brooding but yet very feminine. Like those beautiful old oil paintings on those silent corridors watching over you…” . #Sabyasachi #PalermoAfternoons #DestinationWedding #IndianBridal Photography by @tarun_khiwal

A post shared by Sabyasachi Mukherjee (@sabyasachiofficial) on Apr 1, 2017 at 8:43am PDT

The use of edgy, asymmetrical and non-typical designs is yet another pattern that’s not going anywhere anytime soon. From risqué slits to asymmetrical hemlines, traditional clothing is constantly absorbing trends from elsewhere in the fashion world. With off-the-shoulder clothing foraying into 2017 without much of a drop in following from the last year, lehengas and other traditional items of clothing continue to celebrate bare shoulders. Cold shoulders are here to stay as well, with Indian women wearing the trend in sari blouses and kurtis too.

Customization of ethnic wear and patterns is yet another trend Indian women and men cannot seem to get enough of this year. Traditional wear is increasingly personalised, with folks unafraid to mix and match what wouldn’t have been considered natural, say, five years ago. Whether it is pairing a regular crop top with a traditional woven skirt, or a summer dress stitched up from grandma’s old sari, there’s no denying we’re increasingly comfortable experimenting with traditional clothing.