This Hidden Ancient Town in India Has the Most Stunning Architecture 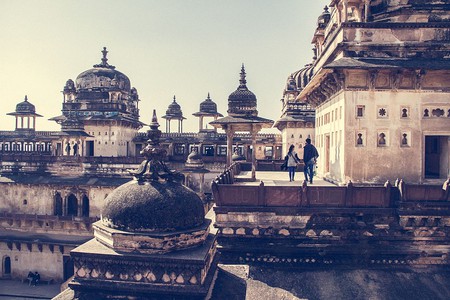 In the Tikamgarh district of India’s central state of Madhya Pradesh, time left behind a small town of Orchha, whose every corner promises tales of love, sacrifice and gallantry. This ancient town is a beautiful synthesis of the Bundela Dynasty and Mughal Empire influences, which is reflected in its architectural and historical landscape. Also, it’s the site where palaces are transformed into temples, God is venerated as a King and a prince is regarded as a demigod, making it worthy of attention.

Founded in 1501 AD by Bundela Rajput King Rudra Pratap Singh, Orchha, a ‘hidden paradise’ has stood the test of time and holds the same religious, architectural and historical richness as centuries ago. It has immaculate temples, palaces, cenotaphs and forts that have frozen it in a time warp. Besides, there are ancient stepwells, royal horse stables, a wind tower and the ojha’s (spirit healers).

With a population of just 10,000 people, this place traverses you into an era where life was simpler compared to now. 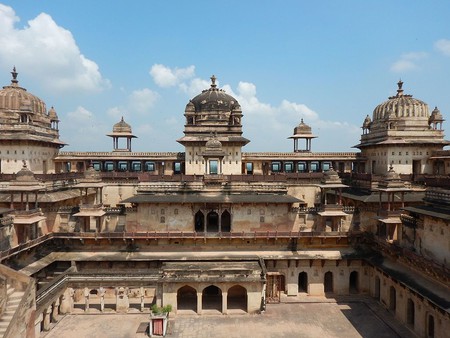 From architecture and history to adventure activities, you can find it all packed into this tiny town of Orchha. In fact, every nook and corner of the town has its own story and the best way to explore is by foot.

Nestled on the banks of Betwa River, the Orchha Fort is home to temples and palaces that reflect the immaculate architectural and historical grandeur of the town. The must-see palaces within the Orchha complex include Jahangir Mahal, Rai Praveen Mahal and Raja Mahal.

Jahangir Mahal: Raja Bir Singh Deo built this palace in the 17th century as a tribute to Mughal emperor Jahangir. Overlooking the river Betwa, this architectural marvel is a perfect amalgamation of Rajput and Muslim architectural styles. It’s a three-storey palace with stunning courtyards and 136 chambers, each adorned with murals, arched entryway and hanging balconies complete with latticework and fine intricately carved chhatris or umbrella. Life-sized stone carved elephant sculptures flank the main entrance and the walls are adorned with turquoise tiles with intricate detailing. The rooftop offers panoramic views of the town. 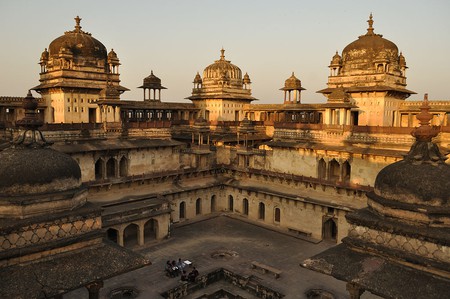 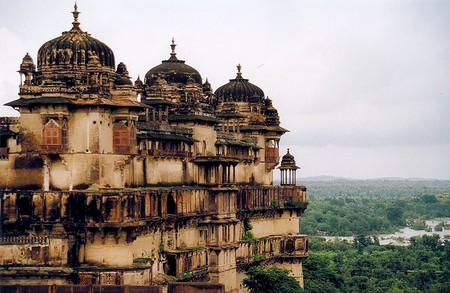 Rai Praveen Mahal: Surrounded by verdant gardens, the Rai Praveen Mahal is a two-storey palace and a perfect epitome of love. It was made by King Indramani for Rai Praveen, who was the court musician and poetess, also known as the ‘Nightingale of Orchha’. This beautiful structure depicts the story of her love and dedication for the King. 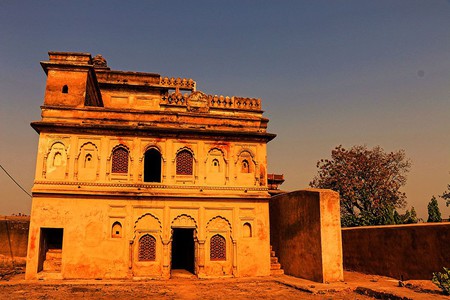 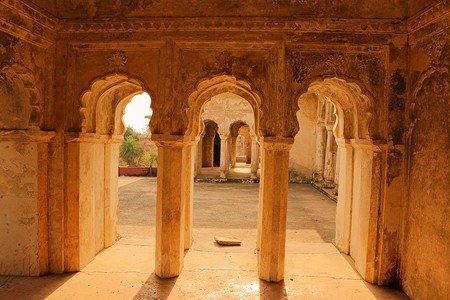 Raja Mahal: It is one of the finest architectural gems with the inner chambers of the palace adorned with religious theme murals that depict the scenes of Hindu mythology. It has interlocking passages and palatial royal quarters, and the exterior of the palace is decorated with delicate umbrella shaped structures (called chhatris). Also, at this palace a Sound and Light show of 50 minutes is held every day that tells the story of the bygone era, from the discovery of a small town to turning into a powerful kingdom. There is a minimal fee of INR 40 ($0.62) for children and INR 75 ($1.17) for adults. 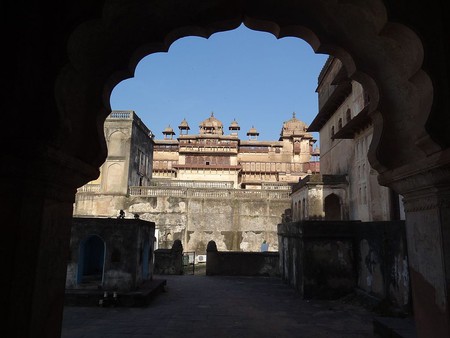 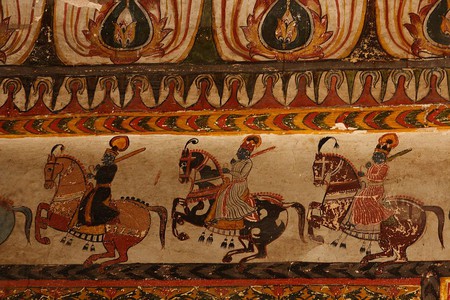 Ram Raja Temple: Legend has it that the wife of King Madhukar Shah got an idol of god Rama from Ayodhya and placed it in the bed chamber of the Raja Mahal. And, once the statue of god is installed somewhere, it doesn’t budge. Hence, this area of the Raja Mahal marked the place for statues and it was transformed into Ram Raja Temple, where the idol is now worshipped and revered as a King. It is India’s only temple where Rama is worshipped as a King, not as a god. 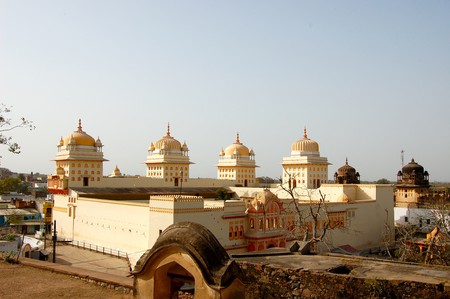 Palki Mahal: To the north of Ram Raja Temple lies the ruins of Palki Mahal. It was the palace of Bundela royal Dinman Hardol, who is revered as a demigod in the town. Legends has it that he died trying to prove himself innocent over an allegation of having an illicit relationship with elder brother Jhujhar’s wife. Villagers have built a small temple for him, called Hardol Baithak, where he is revered for his loyalty.

Outside the Orchha Fort lies the Chaturbhuj Temple that looks like a towering citadel. This temple remained without any deity for a long time. Today, the temple enshrines the idol of Radha-Krishna. This temple sits on a huge stone platform and is only accessible by steep staircases. Numerous paintings adorn the interiors. 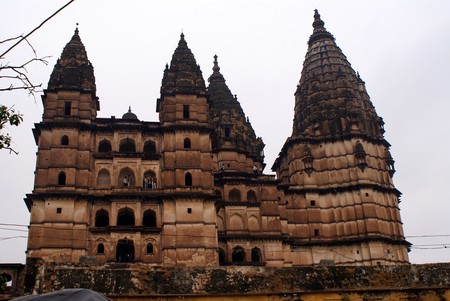 Just a stone’s throw away from Chaturbju Temple lies the Laxminarayan Temple, which is a beautiful synthesis of fort and temple architecture. The interiors are adorned with murals and frescos that are a blend of both Bundela and Mughal art forms and depict various stories related to secular and non-secular topics, including the history of the 1857 war. An interesting fact about this temple is that there is no idol. 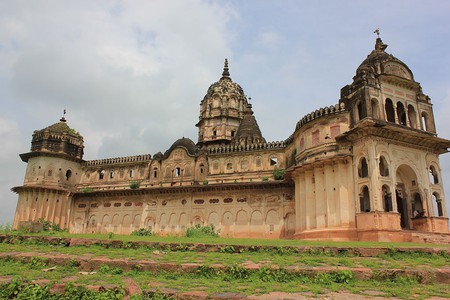 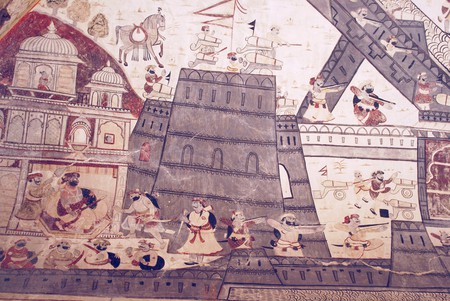 Stretching 46 square kilometres, the Orchha Wildlife Sanctuary is home to a wide range of wildlife. Visitors can catch a glimpse of animals like blue bull, sloth bear, nilgai, spotted deer, peacock, jackal, langurs and monkeys among other species. However, this place is a paradise of bird lovers as it is home to over 200 species of birds, including many migratory birds from across the world, like black swan, peafowls, minivet, collared scops owls and Jungle Bush Quail, to name a few. Betwa rivers flow through the locale, thus making the sanctuary even more alluring and perfect for adventure sports, like canoeing, river rafting, fishing, boating, jungle trekking, camping and hiking.

The must-visit is the 14 stone chhatris (cenotaphs) built on the Kanchana Ghat of Betwa river. Though many cenotaphs are dilapidated, but some are well-preserved. These cenotaphs are dedicated to the erstwhile kings of Orchha. All the chhatris have spires similar to that of a temple, except the Raja Bir Singh Deo cenotaph, which has an Islamic touch. The best time to see these chhatris is sunrise or sundown when the rays of the sun bathe the chhatris in its golden paint – a sight to behold. 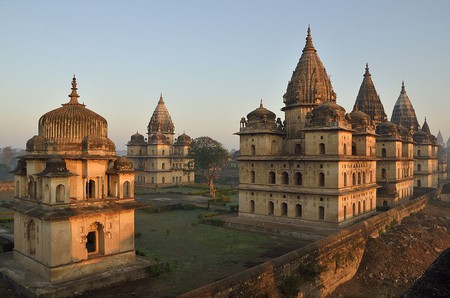 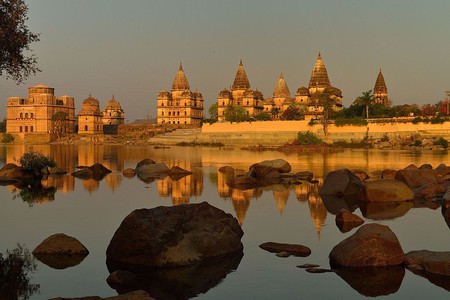 Orchha is a year-round destination. The best time, however, is October to March, when the weather is pleasant with cool breezes.

There are resorts and hotels run by the MP Tourism, along with many homestay options. Some of these include – the Orchha Resort, Sheesh Mahal heritage hotel, Hotel Bundelkhand Riverside, Amar Mahal and Betwa Retreat. These hotels are affordable. For information on their tariff and availability, click here.